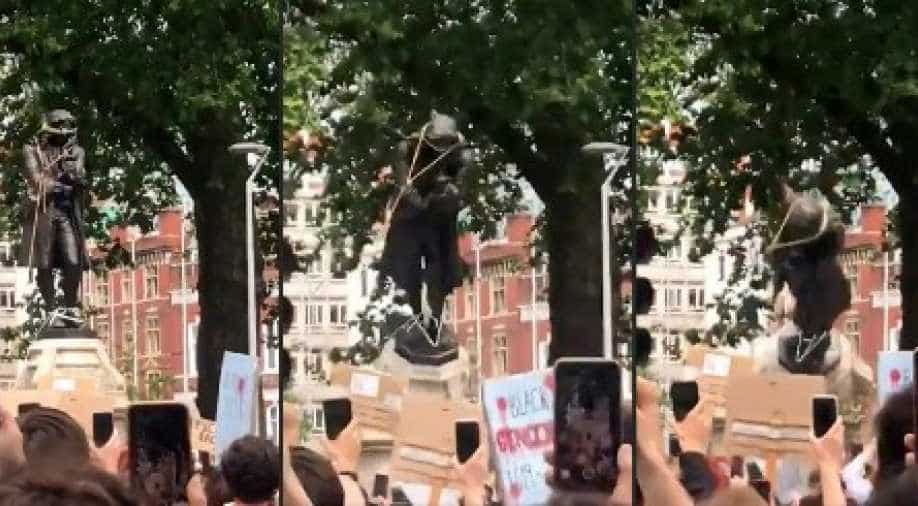 A statue of 17th century British slave trader will go on temporary display in London. The statue was toppled last June in Bristol

The statue of Edward Colston, a former top official in the Royal African Company, was pulled down during a Black Lives Matter rally in the southwest English city on June 7.

It was dragged through the city and dumped in the harbour, as anger at the death of George Floyd in US police custody the previous month prompted protests in numerous British cities and around the world.

Later this year, four people will stand trial after pleading not guilty to charges of criminal damage.

The statue was retrieved from the harbour and a conservation team at local museum M Shed cleaned it and stabilised spray painted graffiti to prevent flaking.

The statue will be centrepiece of a temporary exhibition opening next Friday.

Meanwhile, Bristol's city council is going to launch a survey, asking locals about what they think should happen to the statue.

Bristol mayor Marvin Rees, who previously described its toppling as a "piece of historical poetry", said the exhibition and survey aim "to start a conversation about our history".

In response to the incident, Rees formed the We Are Bristol History Commission last September, which he said would "be leading that conversation with citizens over the coming months".

"The 7 June 2020 is undoubtedly a significant day in Bristol's history and had a profound impact not just in our city but also across the country and around the world," he said.

"The future of the statue must be decided by the people of Bristol," Rees added, urging all residents to participate.