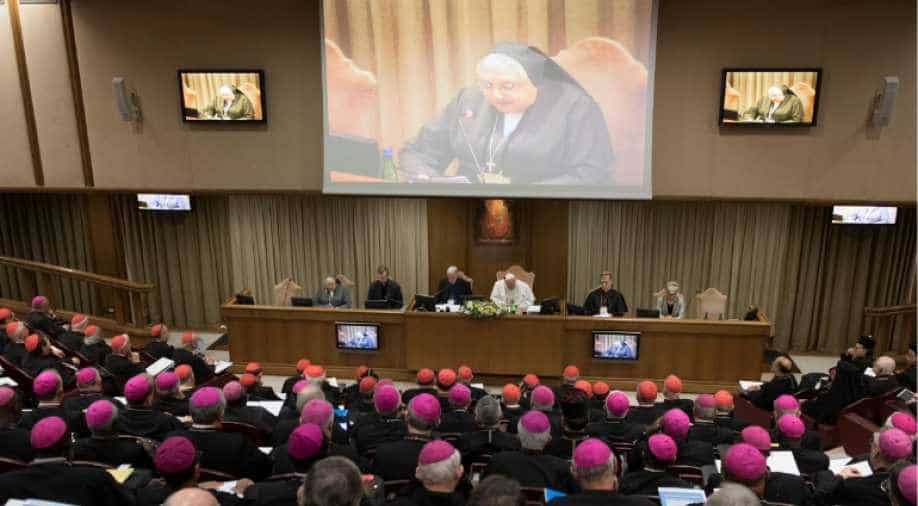 'Files that could have documented the terrible deeds and named those responsible were destroyed, or not even created,' German Cardinal Reinhard Marx said.

A top Catholic cardinal admitted Saturday that Church files on priests accused of sexually abusing children were destroyed or never even drawn up in a move which allowed paedophiles to prey on others.

German Cardinal Reinhard Marx was speaking on the third day of an unprecedented summit of the world's top bishops convened by Pope Francis in a bid to tackle the crisis over paedophilia within the clergy.

"Files that could have documented the terrible deeds and named those responsible were destroyed, or not even created," Marx told the landmark Vatican summit on a problem that has dogged the Roman Catholic Church for decades.

"Instead of the perpetrators, the victims were regulated and silence imposed on them," he said.

"The stipulated procedures and processes for the prosecution of offences were deliberately not complied with."

The ongoing scandals over sexual abuse have escalated, engulfing countries across the globe with the latest crises hitting Chile, Germany and the US. At one point, delegates heard the testimony of a woman who was repeatedly raped by a priest when she was just 11.

"Engraved in my eyes, ears, nose, body and soul, are all the times he immobilised me, the child, with superhuman strength," said the woman, who remained anonymous.

Back in September, Marx apologised personally to thousands of victims who had been abused by clergy within the German Church, saying the perpetrators must be brought to justice.

His admission about the documents on Saturday sparked an angry reaction from Peter Isely of the Ending Clerical Abuse (ECA) association, who denounced such destruction of paperwork as "illegal" and demanded an investigation.

"What he didn't tell us is... Who did it? Where did they do it? And what did they destroy?" he told AFP. Victims marched to the Vatican, holding signs accusing Francis of being deaf to their cries, and urging the expulsion from the Church of both the abusers and those who enabled them.

"I didn't remember my rape -- it was very, very violent -- until 50 years after it happened," Tim Lennon, from the survivors' network SNAP, told AFP.

Investigations have shown that in many cases, priests accused of assaulting minors were transferred to other parishes as bishops turned a blind eye to protect the Church's reputation.

"The rights of victims were effectively trampled underfoot, and left to the whims of individuals," Marx said. The cardinal said it was essential that victims felt they could "trust the system".

"There are no alternatives to traceability and transparency," he said, admitting efforts to cover-up scandals had badly undermined the Church's credibility.

Francis has told his bishops he wants "concrete measures" drawn up against child sex abuse. But survivors have lambasted the centuries-old institution for not releasing the names and case files of priests convicted of abuse or possessing child pornography.

The Vatican has in the past refused to hand over internal documents about child sexual abuse cases to civil authorities investigating paedophilia. On Friday, Archbishop Charles Scicluna, one of the organisers of the summit, said the call for statistics to be released was "legitimate".

Marx also called for a rethink of pontifical secrecy, echoing the appeal made Friday by Linda Ghisoni, a professor of canon law at the Pontifical Gregorian University, who told the meeting "the current legislation on pontifical secrecy" needed rewriting. Marx said transparency was needed in other areas of the Church, such as "the area of finances".

Scandals surrounding the Vatican bank have prompted a clean-up in recent years, with some 5,000 bank accounts being closed. But the decision to sack the bank's deputy director in 2017 without explanation prompted a flurry of rumours that he was dismissed because his investigations into possible illegal activity had hit too close to home.

The bank's reputation first came into question in 1982 after the body of senior banker Roberto Calvi was found hanging from Blackfriars Bridge in London. Calvi was often referred to as "God's Banker" because of his close ties to the Vatican.

No one has ever been convicted of his murder but prosecutors believe it was a mafia killing linked to money laundering via Banco Ambrosiano, the bank he chaired.