To survive trade war, some US importers embark on major revamps of product lines 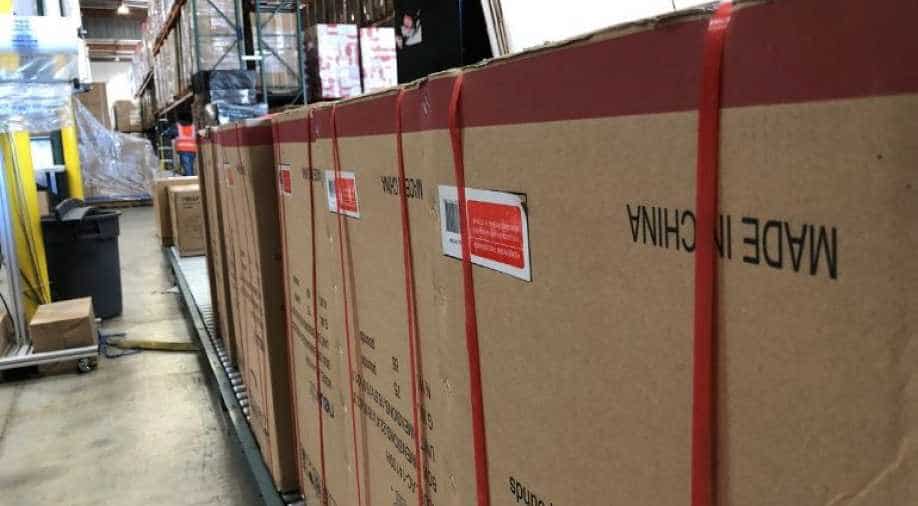 Boxes marked 'Made in China' are lined up in NewAir's warehouse in Cypress, California, US. Photograph:( Reuters )

The importer of beer fridges, ice makers and other household devices all sourced from China had tackled 10 per cent tariffs imposed last year by seeking to cut costs and negotiating with big box and other retailers for better terms.

When US President Donald Trump tweeted in May his intention to raise tariffs on Chinese goods, management at California-based NewAir Appliances knew they needed to do something or their business would be in trouble.

The importer of beer fridges, ice makers and other household devices all sourced from China had tackled 10 per cent tariffs imposed last year by seeking to cut costs and negotiating with big box and other retailers for better terms.

But the jump to 25 per cent tariffs presented a much bigger challenge.

The day after Trump's tweet, NewAir's four-member leadership team met for lunch and began to formulate a more radical plan. There was a "level of tension", said Andrew Stephenson, the company's vice president for marketing, but no sense of panic.

The result: an ambitious overhaul of its product offerings, with 50-60 new or revamped goods set to come on the market this year a move that allows the company to hit the reset button on pricing as their costs leap.

The product turnover is a huge increase for NewAir, which has a range of some 70 goods and usually introduces 10 or fewer new items each year.

Like NewAir, many importers of goods from China have had to make difficult business decisions and sharp changes in strategy as they reel from the impact of US tariffs on $250 billion of Chinese goods.

With consumers and retailers often unwilling to accept higher prices for the same products, oft-heard tactics range from accepting lower profit-margins to cost-cutting that may include lowering wages or laying off workers, to shifting production from China to other countries.

While the approach taken by NewAir and others in the sector requires significant investment, it underscores how the year-long US-China trade war is forcing some companies to adopt novel workarounds as they fight for long-term survival and bump up against the limitations of belt-tightening.

"Instead of cutting costs we're going to add some costs, but in the long run it will pay off," Stephenson said by telephone after a trip to China to meet suppliers.

Working closely with suppliers to develop products, he is also implementing measures like air-mailing samples to the United States instead of using cheaper maritime freight, aiming to slash up to a month of the process of getting goods approved.

"Anything we can do to expedite the process is what we're looking at doing," he said.

NewAir, a company with 50-plus employees, would likely spend "hundreds of thousands of dollars" on the project and was considering hiring a marketing manager, as Stephenson's focus shifts to dealing full-time with trade war strategy.

NewAir, whose products are sold under its brand as well as under licence with Magic Chef, Frigidaire and PepsiCo Inc, is still discussing ways to share the burden of the tariffs with Chinese suppliers and American retailers. It is also looking into sourcing some goods from India and Mexico.

But the cornerstone of its new strategy is the overhaul of its product line.

In addition to items it has not sold before, such as internet-enabled wine fridges and combination air fryer ovens, NewAir will retire some old products and give others that have been modified fresh SKUs, or stock-keeping units - unique product numbers that retailers use to track inventory. That will allow NewAir and its retailers to set new prices.

Jim Estill, CEO of Danby Appliances, a Canadian company that sources similar products from China and sells many in the United States, calls the strategy "up featuring".

"If you're already buying a minifridge for $129 and now it's $149. You're up in arms. But the psychology is completely different if you say: 'here's the new XYZ, it's $149' and the customer checks the market and sees everyone is charging $149 for the same thing, it's acceptable."

Danby expects to turn over 80 per cent of its product line of about 300 goods in 2019, compared to a normal rate of 30 per cent, he said, adding that improvements in technology had made this an opportune time for product revamps.

"If this happened 10 years ago, it would have been tough to say my white box is different. But now you can say I have a freezer that sends you an email when the power is out."

Danby, which makes annual revenue of about $400 million, estimates the cost of revamping its product line at around $4 million.

If the strategy works, it does in part shift some of the costs of tariffs designed to hurt China to the US consumer. But it is not risk-free.

"When you sell new products at significantly higher prices it will affect your demand somewhat because now you are asking people to upgrade to a better product at much higher prices. How many consumers would have such budgets?" said Jing Bing, an associate professor of marketing at the Cheung Kong Graduate School of Business in Beijing.

The point of pursuing a trade war "is to ask the American consumers to walk away from Chinese made products," he said, adding: "That's precisely the effect."

NewAir CEO Luke Peters said retailers and consumers will get better products and will not see "a huge 25 per cent increase" in prices.

"Our customers, who also have to be profitable, are going to see more value in the products that we're giving to them. So it's kind of forcing us to be more innovative," he said.

But whether or not importers like NewAir can find a balance between higher prices and demand remains to be seen.

"That's going to be the telltale for us, is what happens in about six to nine months," said Stephenson.