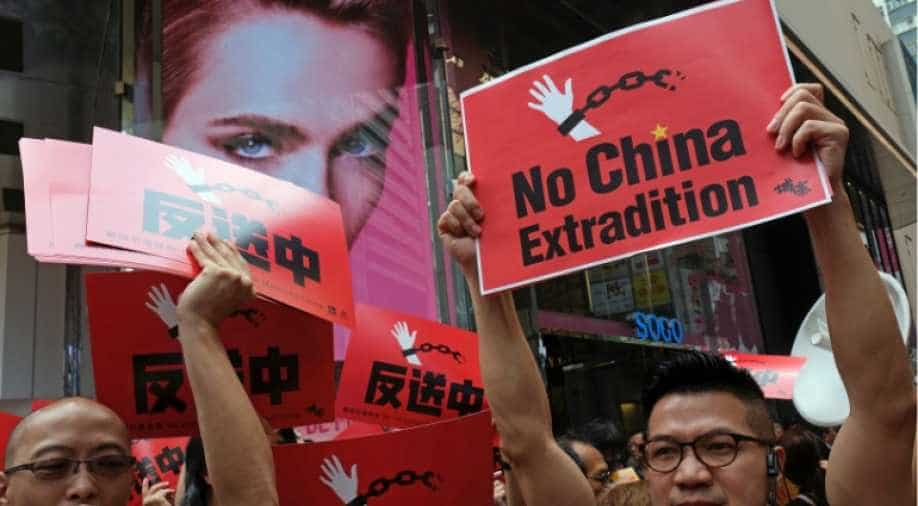 Protesters in Hong Kong have achieved a major victory in their fight to protect their legal system from Chinese interference.

Protesters in Hong Kong have achieved a major victory in their fight to protect their legal system from Chinese interference.

On June 15, in response to massive popular resistance, Chief Executive Carrie Lam announced she would suspend a vote on a proposed new law that would allow China to extradite suspects accused of certain crimes and prosecute them in Chinese courts.

For over a week, some 1.3 million people had gathered daily outside Hong Kong’s legislature to protest the legislation, which protesters say China will abuse to extradite political dissidents. They managed to postpone a June 12 vote by blocking entry to the legislative building. Days later, consideration of the law was indefinitely postponed.

That temporarily protects Hong Kong’s judicial system, one of the island territory’s few remaining areas of government autonomy from China.

Protesters are now demanding that the bill be withdrawn, not just suspended. If the law comes up for vote at a later date, it will likely pass in Hong Kong’s legislative council, where pro-China forces dominate.

Chinese rule over Hong Kong, an island territory off the coast of Shenzhen, has long been disputed.

The British colonised Hong Kong in the 1800s following the Opium Wars. But China never accepted this territorial claim, and insisted throughout the 20th century that Hong Kong belonged to China.

In 1997, after a decade of negotiations between the United Kingdom and China, Hong Kong returned to China – with some strings attached. Knowing that Hong Kong had developed under a Western system of government, then Chinese leader Deng Xiaoping made Hong Kong a “Special Autonomous Region” and agreed to give the island a 50-year transition period to come fully under Chinese rule.

Under this system, Hong Kong would retain its judicial system and legislative council, affording the island relative independence in its day-to-day operations. But Hong Kong would belong to China. The arrangement became known as “one country, two systems.”

Controversially, full suffrage and free elections were not part of the 1997 deal.

For two decades, though, the “one country, two systems” arrangement seemed to give Hong Kong relative autonomy from Chinese interference.

Then, in 2014, China announced that people would be allowed to vote in Hong Kong’s 2017 chief executive election only from a short list of preapproved candidates.

Thousands took to the streets to demand universal suffrage. To protect themselves from police spraying tear gas at the front lines, they used umbrellas, giving rise to the name the “Umbrella Movement.”

In the years since the uprising, I have interviewed numerous democracy activists in Hong Kong as part of my academic research into the evolution of social movements.

Many participants told me that they believed the 2014 Umbrella Movement had ended peacefully because China didn’t want another Tiananmen Square on its hands. In 1989, Chinese soldiers opened fire on student protesters in Beijing, killing hundreds and raising global uproar.

Emboldened by international support for the Umbrella Movement, Hong Kong’s young activists have continued their efforts to protect their independence from China. Nine Umbrella Movement leaders ran for local office in Hong Kong in the territory’s 2015 elections.

In 2016 elections, two pro-independence politicians even won seats in the legislative council. However, they were quickly expelled for “failing” to properly recite their loyalty oaths at a swearing-in ceremony.

In 2017 Carrie Lam, a candidate loyal to Beijing and the driving force behind the extradition law, was elected Chief Executive – Hong Kong’s highest public official.

Under Lam’s leadership, traditionally pro-democracy politicians were removed from office. Some were even arrested and jailed as dissidents.

For decades, Hong Kong’s relative autonomy has made the island territory an appealing place to do business in Asia. But under stronger Chinese rule, financial markets and regulatory systems in Hong Kong may become less reliable as they begin to reflect the national interests of China – not those of the free market.

The American Chamber of Commerce and several prominent Hong Kong business leaders have publicly spoken out against the extradition law.

Hong Kong’s legal system is now the only surviving pillar of “one country, two systems,” which was created to give Hong Kong autonomy over its legal, economic and financial affairs.

If the postponed extradition law passes, there will be no meaningful remaining barriers between democratic-leaning Hong Kong and authoritarian China.

For many in Hong Kong, that’s an intolerable future.

An assessment by the World Justice Project, a nonprofit organization that works to advance the rule of law worldwide, ranks Hong Kong 16th and China 82nd worldwide based on their constraints on government powers, absence of corruption, open government, fundamental rights, order and security, regulatory enforcement, civil justice and criminal justice.

China is a known violator of human rights. It systematically surveils and represses ethnic minorities like the Uyghurs, a Muslim population in China’s northwest region, and restricts internet access. The government has jailed hundreds of human rights lawyers since 2015.

Political dissidence is not tolerated in China. The late Nobel Peace Prize winner Liu Xiaobo, was sentenced in 2009 to 11 years in Chinese prison for “inciting subversion of state power.” He died in prison in 2017 after being denied travel abroad for cancer treatment.

Hong Kong, on the other hand, has a rich history of mass demonstrations.

In Hong Kong’s 1966 Star Ferry riots, people protested the British colonial government’s decision to increase transit fares. And every July 1 since 2003 – the anniversary of the 1997 transition from British to Chinese rule – people have taken to the streets pleading for universal suffrage.

The extradition law’s threat of trial and punishment in China would have a chilling effect on future democracy demonstrations there.

If “One country, two systems” falls, what remains of Hong Kong’s democracy will go down with it.