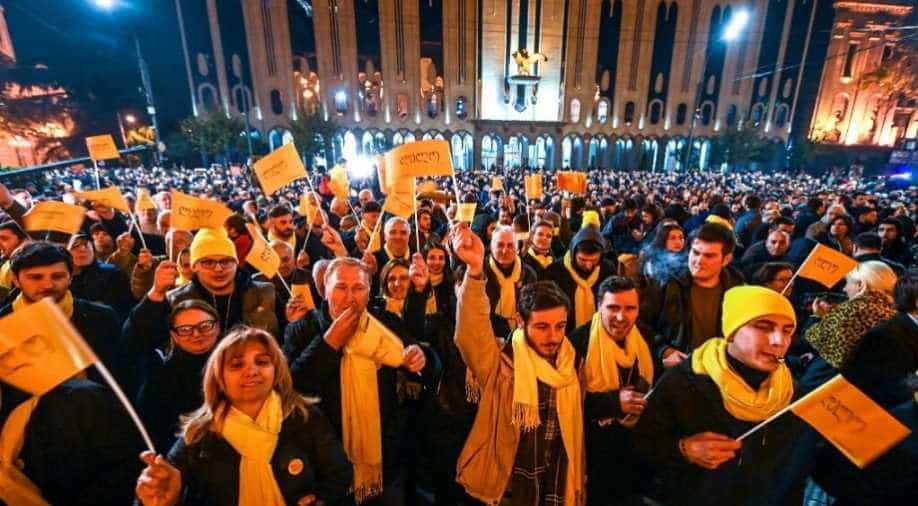 Protesters gathered outside the parliament building in one of the biggest anti-government rallies in years amid mounting pressure on the ruling Georgian Dream party led by powerful oligarch Bidzina Ivanishvili.

Protesters gathered outside the parliament building on the capital Tbilisi's main thoroughfare in one of the biggest anti-government rallies in years amid mounting pressure on the ruling Georgian Dream party led by powerful oligarch Bidzina Ivanishvili.

Demanding the government's resignation and snap parliamentary polls, the crowd waved Georgian and European Union flags, lit coloured flares and held up a giant banner with the anti-Ivanishvili slogan "All against One".

Opposition parties had called for the protest after forming an unprecedented united front against Georgian Dream, whose MPs last week voted down legislation to hold parliamentary elections next year under a new proportional voting system.

The opposition accused Ivanishvili of orchestrating the bill's failure, saying the ruling party unfairly benefits from the current voting system.

At an earlier protest on Thursday, some 10,000 people rallied in Tbilisi, vowing to hold "permanent mass protests" until their demands for snap polls are met.

The summer protests saw a violent police crackdown in which 240 people were injured and two peaceful protesters lost an eye, including a teenage girl.

Georgian Dream, in power since 2012, has seen its popularity plummet amid widespread discontent over its failure to address economic stagnation and perceived backsliding on its commitment to democracy.

Critics have accused Ivanishvili, who is widely believed to be calling the shots in Georgia, of persecuting political opponents, suffocating critical media, and creating a corrupt political system where his private interests dominate government's decision-making.