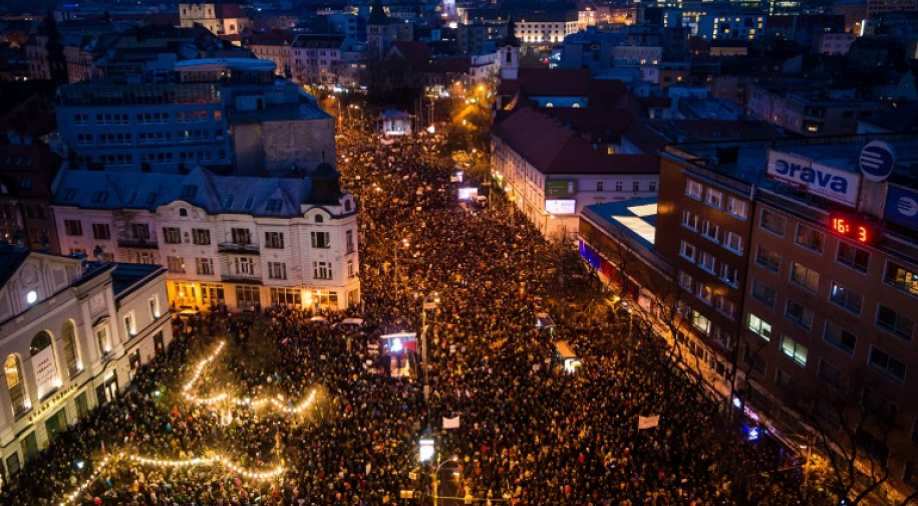 People take part in a rally near the Slovak National Uprising (SNP) square against corruption and to pay tribute to murdered Slovak journalist Jan Kuciak and his fiancee Martina Kusnirova on March 16, 2018 in Bratislava, Slovakia. Photograph:( AFP )

Tens of thousands of protesters took to the streets across Slovakia on Friday to call for snap elections, saying the premier's resignation was not enough to fix what they see as a corrupt government

Tens of thousands of protesters took to the streets across Slovakia on Friday to call for snap elections, saying the premier's resignation was not enough to fix what they see as a corrupt government.

The local Dennik N newspaper said about 50,000 people turned out in the capital Bratislava alone, where protesters carried signs with slogans like "Slovakia is going the wrong way" and "We want elections".

Organisers of the "For a decent Slovakia" protest had announced there would be rallies in 34 cities at home and 25 cities abroad.

The EU member has been in political crisis since last month's killing of an investigative journalist who had been probing alleged ties between top politicians and Italian mafia.

Faced with street protests, threats to quit from a coalition partner and a no-confidence vote tabled by the opposition, Robert Fico resigned as prime minister on Thursday.

But analysts believe he will continue to pull the strings from behind the scenes as the chairman of the governing Smer-SD party, whose deputy Peter Pellegrini was tapped to become the new prime minister.

The country's three-party government coalition remains in place. It consists of the left-wing populist Smer-SD and two junior partners: the Most-Hid Hungarian minority party and the far-right Slovak National Party.

Earlier on Friday, Pellegrini said he believes his government will "calm the situation in our country."

"I can assure you that it will be a government that maintains its clear pro-European orientation," he added in a statement.

But the leadership change was not enough for activist Filip Vagac in Bratislava.

"A resignation no longer suffices. It has to be them (government politicians) leaving public life. Go away. Enough," Vagac said.

"November '89 brought enormous changes. I believe that this situation will also start a process that will change Slovakia."

He was referring to the 1989 Velvet Revolution that toppled Communism in the former Czechoslovakia and was the country's last anti-government protest of this size.

The demonstrations come after journalist Jan Kuciak and his fiancee, both 27, were found shot dead at their home near Bratislava on February 25.

Police said Kuciak's death was "most likely" related to his investigation into alleged ties between top Slovakia politicians and Italy's 'Ndrangheta mafia.

The murder and Kuciak's article, which was published posthumously, raised fresh concern about media freedom and sparked anti-government sentiment in the EU member of 5.4 million people.