The turbine conundrum: Russia and Germany play blame game on the delivery of Nord Stream 1 turbine 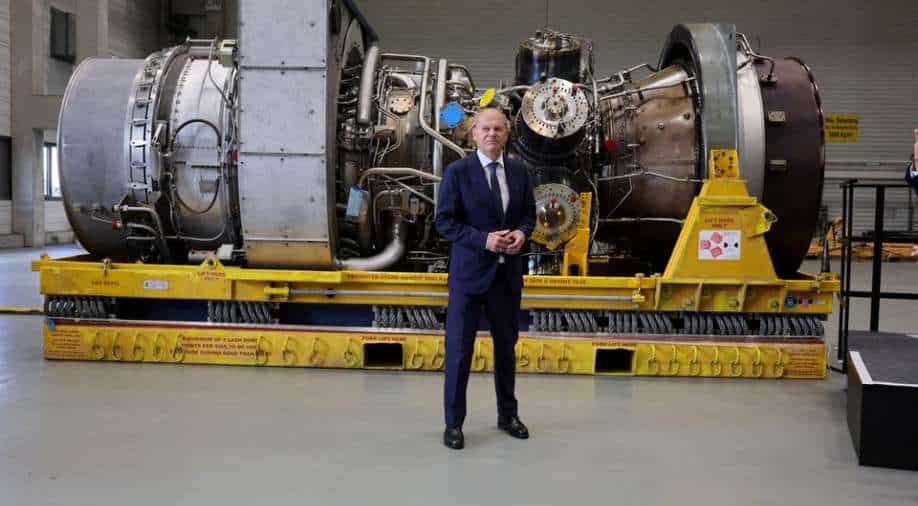 German Chancellor Olaf Scholz on Wednesday stood in front of a gas turbine, bound for the Nord Stream 1 pipeline that had been sent to Canada for maintenance. He demanded Russia take back the turbine and restore the gas supplies.

As the winter season draws closer, the desperation of European nations, especially Germany is visible. Reportedly, German Chancellor Olaf Scholz on Wednesday visited a Siemens Energy factory in the country and stood in front of a gas turbine, bound for the Nord Stream 1 pipeline that had been sent to Canada for maintenance.

Scholz stated that the turbine was working fine and that there was no reason that Russia shouldn't take the turbine back and kick the supplies to pre-war levels.

"The turbine works. There was nothing mystical to observe here. It's quite clear and simple. The turbine is there and can be delivered, but someone needs to say I want to have it" said Scholz.

As reported extensively by WION, when Russia closed the Nord Stream 1 pipeline, citing maintenance and that the 12-metre turbine was stuck in Canada for repairs, the entire continent accused Kremlin of throttling gas supplies.

At one time, Russia and its state-owned gas company Gazprom which has to supposedly receive the turbine, even threatened to close the supply for good.

However, after 10 days, the supply resumed but it still hasn't reached the pre-maintenance levels with reports mentioning that pipeline is only working at 20 per cent of its capacity.

The blame game between Germany and Russia

While Scholz demanded that Russia take back the machine and start the supplies, Kremlin blamed the lack of documentation for stalling the return.

Moreover, Gazprom stated that the contract for turbine servicing was not honoured. Reportedly, Moscow is miffed that the turbine was transported to Germany without its consent.

Some experts are of the view that by refusing to accept the turbine and not increasing the gas supplies through Nord Stream 1, Russia is making the ground for its Nord Stream 2 pipeline, which was shelved by European nations after it invaded Ukraine.

However, Scholz was quick to shoot down the suggestion. "We have terminated the approval process, for good reason. There is sufficient capacity at Nord Stream 1, there is no lack." said Scholz.

The war has been going on for months and yet the European continent has only been able to reduce their combined gas dependency on Russia by a tiny five per cent.