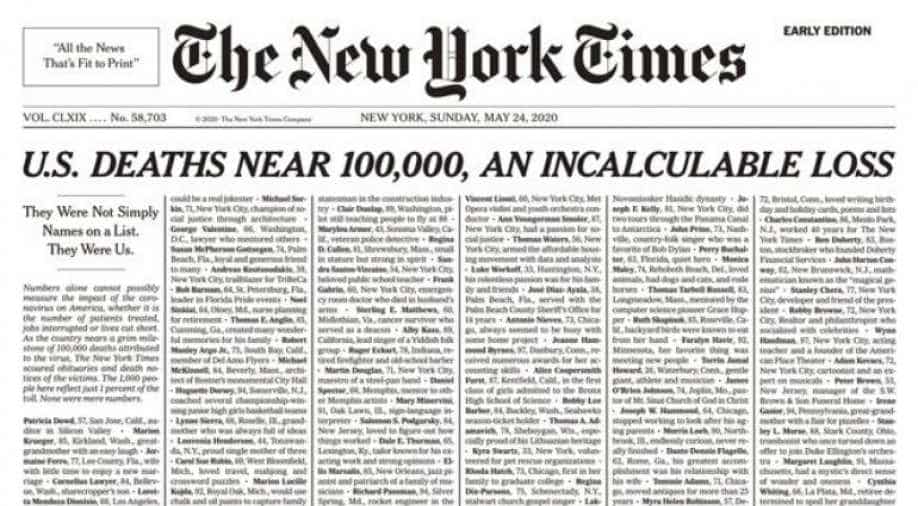 The newspaper will name 1,000 deaths, that is equal to 1 per cent of total casualties in the United States.

As coronavirus continues to grip the United States taking the death toll near 100,000, the New York Times has decided to pay homage to the human loss due to pandemic. Sunday's newspaper will feature names of 1,000 people who died from COVID-19.

According to Josh Crutchmer, who is the print planning editor of the New York-based newspaper, shared an image of Sunday's newspaper and described the death toll as "An Incalculable Loss."

The front page of The New York Times for May 24, 2020 pic.twitter.com/Mp4figjnQe

The newspaper will name 1,000 deaths, that is equal to 1 per cent of total casualties in the United States.

The New York Times assistant editor of the Graphics desk, Simone Landon came up with this way of paying homage, because she wanted to convey both the vastness and the variety of lives lost.

She said: "We knew we were approaching this milestone."

"We knew that there should be some way to try to reckon with that number," she added.

She chose to name people than putting 100,000 dots because that will not tell anyone about who these people were and how valuable were they for the country.

According to Johns Hopkins University, the United States recorded 1,127 deaths in 24 hours from COVID-19 on Saturday, bringing its total to 97,048. The country has also crossed 1.5 million mark in terms of cases. The total number of confirmed cases stands at 1,621,658,  according to the tracker kept by the Baltimore-based university showed at 8:30 pm (0030 GMT Sunday).