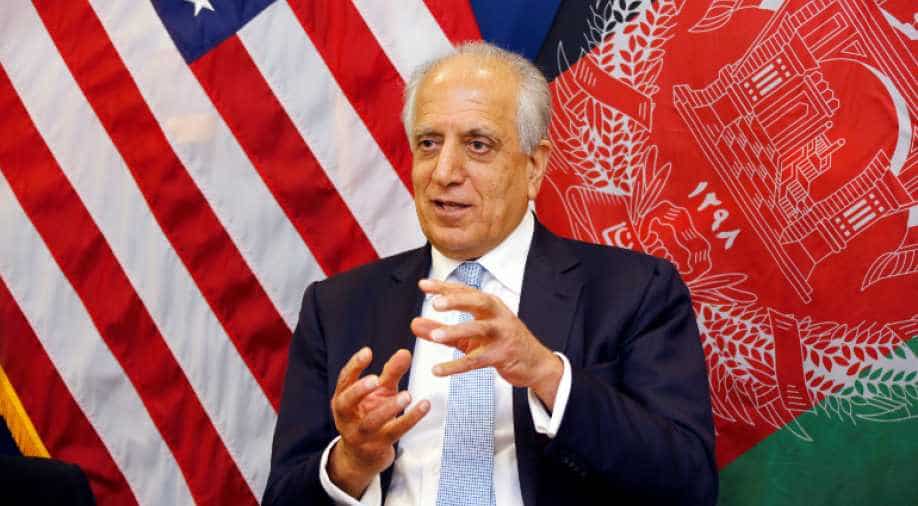 US special envoy for peace in Afghanistan, Zalmay Khalilzad, speaks during a roundtable discussion with Afghan media at the US Embassy in Kabul, Afghanistan. Photograph:( Reuters )

'We continue to take slow, steady steps toward understanding and eventually peace,' Khalilzad adding that the talks would be continued on Saturday after a two-day break.

Taliban and American officials holding talks in Qatar on ways to end the war in Afghanistan have held “extensive” discussions on how foreign troops could be withdrawn and on how to guarantee the country would not be used again by outside forces to attack other countries, the Taliban said in a statement on Thursday.

The US special peace envoy Zalmay Khalilzad said in a tweet that the meetings in Doha were productive.

"We continue to take slow, steady steps toward understanding and eventually peace," Khalilzad adding that the talks would be continued on Saturday after a two-day break.

After Wednesday's session, the two sides decided to adjourn in order to hold consultations and prepare for their next session, according to the statement issued by Taliban spokesman Zabiullah Mujahid.

The two sides had resumed talks this week after making significant progress in an earlier round of discussions, also held in Doha, in January.

While the United States and other powers have long maintained that the peace process should ultimately be Afghan-led, the Taliban this week reiterated opposition to direct talks with President Ashraf Ghani's administration in Kabul, which it regards as an illegitimate government.

The Taliban said their newly-appointed political chief Mullah Abdul Ghani Baradar met with Khalilzad, and General Scott Miller, the top NATO commander in Afghanistan, as well as senior members of the Qatari government this week.

Baradar, a co-founder of the hardline Islamist group, was released from a Pakistani jail last year to participate in the talks, and his presence at the negotiating table demonstrated Taliban's readiness to engage at a more senior level.

US President Donald Trump said he intended to reduce US forces in Afghanistan. And in his annual State of the Union address to Congress this month, Trump said: "Great nations do not fight endless wars."

The United States intervened in Afghanistan in 2001 to help opposition forces topple a Taliban government which had sheltered the al Qaeda militants responsible for the September 11 attacks on the United States.

Washington and its allies later sent troops to prevent the Taliban from returning to power, and have been locked in a war with the insurgents ever since.

A senior Taliban commander informed on the content of the talks told Reuters that the two sides could soon reach an agreement assuring the United States that Afghanistan would not be used against them or their allies in the future.

He said the Taliban had resisted pressure from the US delegation to declare a ceasefire before the onset of warmer spring weather, which usually flags off an escalation in the insurgency.

"They repeatedly ask for a ceasefire. But the answer is no from our side," the commander said, speaking on condition of anonymity.

Last year, almost 4,000 civilians were killed in the conflict, including a record number of children, making it the single deadliest year for Afghan civilians since the United Nations began documenting casualties a decade ago.