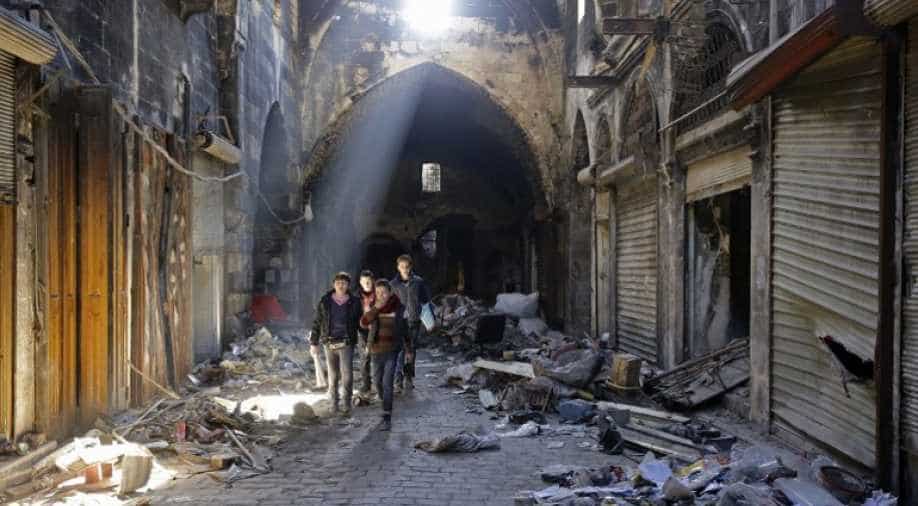 'We lived here before without water or electricity, and that is still the same... You can live without basic services, but not alongside death,' said Abdel-Hayy. Photograph:( AFP )

For Abdel-Hayy and his family, home is now just a single room in their apartment in Syria's ravaged east Aleppo, surrounded by the little salvageable furniture they have left.

But like many in the devastated former rebel-held districts of Syria's second city, they are just happy to be safe, and determined to begin resuming a semblance of normal life.

"The situation is safe now, and that's reason enough to return with my family," the 38-year-old said.

"We lived here before without water or electricity, and that is still the same... You can live without basic services, but not alongside death."

Along with tens of thousands of other east Aleppo residents, Abdel-Hayy and his family fled their neighbourhood in early December during fierce fighting between rebels and advancing army troops.

But once the government declared its recapture of the city on December 22, they came back to start the slow work of rebuilding.

"I'm preparing a single room now, and then afterwards I'll continue, one room at a time," said Abdel-Hayy, who did not give his family name, standing by a laundry-line strung from coathooks on a wall.

His home was damaged multiple times during the fierce fighting that ravaged east Aleppo from 2012 onwards.

The windows are long gone, replaced by wooden boards, shrapnel has gouged its way into the building's facade, and the force of regular blasts left his apartment walls riven with cracks.

And when he returned, he discovered most of his furniture upturned and damaged, with glass from lamps and bulbs strewn across the floor.

The local government has promised homeowners compensation for damage.

"We have to bring documents proving we own the property, and then we have to wait our turn for the commission to come and assess the damage," said Abdel-Hayy, who used to work selling watches.

Um Imad stands on the balcony of a friend's borrowed apartment, facing her old home that collapsed into the street, in Aleppo's formerly rebel-held al-Shaar neighbourhood, on January 21, 2017. (AFP)

For Ahmed Jassem and his wife Um Imad, home is just across the street, but little more than rubble.

They are living in a friend's borrowed apartment, within painful view of their old home.

"When I come out on the balcony and see it I begin to cry," said Um Imad, her head covered with a black scarf.

"I say to myself: 'I'm in a place with no water, and no electricity. My house is destroyed. How will everything go back to how it was?'"

She and her husband and their 15-year-old son stayed in east Aleppo throughout the fighting, living in the borrowed apartment after being forced out of their home.

Half their old apartment building has collapsed into the street, and laundry lines still pegged with clothes are caught on metal pylons sticking out of the ruins.

With no electricity, their temporary home is cold and gloomy, forcing them to use battery-operated flashlights inside, and burn firewood for heat.

"The cold doesn't let up, and none of the basic necessities are available," said Jassem as he fed a small fire.

"But at least it is safe for me and my only son. I don't want to lose anymore," he said, declining to discuss the family members he has lost in the war.

'Everything can be rebuilt'

Um Imad is hoping she will finally be able to send her son back to school after years of keeping him home for fear of bombardment.

"Today I feel reassured that he can go and come in safety and it's time for him to go back to school and return to normal life."

In a neighbouring street, Fuad al-Saqa sat on the edge of his destroyed home smoking a cigarette by the rubble blocking his front door.

He had been waiting since morning for municipal vehicles to arrive and help remove the rubble, but with so much to clear, demand is high.

On the third floor of a neighbouring building, a man and his children were simply sweeping rubble through holes in the front of the building, sending debris and dust tumbling into the street below.

On a street corner, greengrocer Imadeddin al-Suda had set up his stall, a riot of colour, with gleaming pink radishes set alongside rosy apples and fresh greens.

"Two months ago... you couldn't stand by the stall for fear of being injured in bombing," he told AFP.

"We only had two or three things... Now the stall is full and colourful and the prices have dropped by 75 per cent, while customers have increased," the 37-year-old said.

Despite the destruction around him, Suda said he was happy to be back at work and serving customers.

"All that's important is that people are safe. Everything else can be rebuilt."