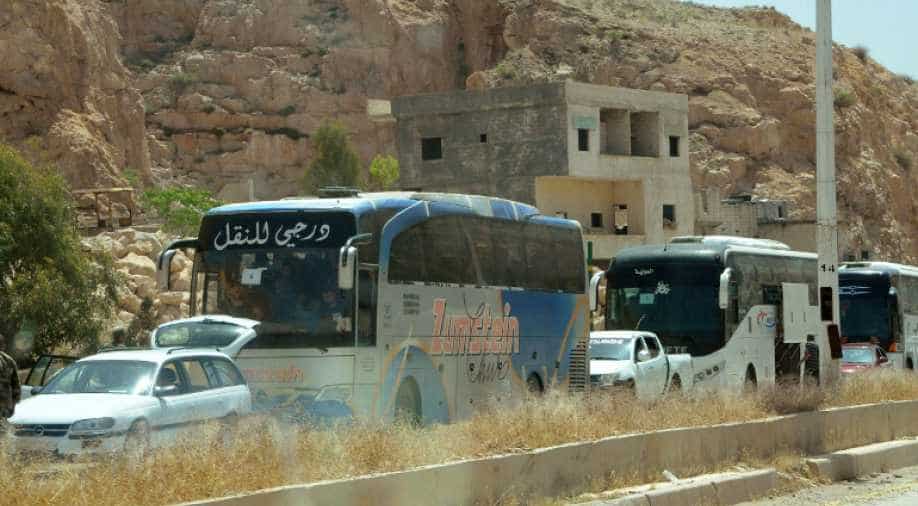 A handout picture released by the Syrian Arab News Agency (SANA) on May 8, 2017, shows the first batch of militants and some of their family members leaving from Damascus' Barzeh neighbourhood. (SANA) Photograph:( AFP )

Syrian rebels and their families began evacuating from a district of Damascus for the first time on Monday, bringing the government closer to recapturing all of the capital.

The evacuation began days after regime backers Russia and Iran and rebel supporter Turkey signed a deal to implement "de-escalation zones" where the government and opposition will halt hostilities.

Foreign Minister Walid Muallem on Monday rejected any role for the United Nations or international forces in monitoring the zones.

State television cited the Damascus provincial governor as saying a first wave of 1,022 people, including 568 fighters, had left Barzeh on Monday.

The channel said the evacuation would take five days, but that rebels who chose to stay could do so if they registered with the government.

Those leaving will head to the rebel-held province of Idlib, in Syria's northwest.

The evacuation deal was struck late Sunday night, and dozens of people gathered in Barzeh from Monday morning.

A source from the pro-government National Defence Forces said rebel fighters would be allowed to take their "personal weapons" with them.

Negotiations were ongoing for a similar deal in the district of Qabun, in Damascus's northeast, which forces loyal to President Bashar al-Assad have been shelling heavily for weeks.

"We are working on Qabun and there is the Yarmuk camp, where talks are underway for the evacuation of armed groups," said Muallem.

The evacuation is a first in the capital, but the Barzeh agreement follows a model of "reconciliation deals" implemented across the country.

The government touts such deals as the best way to end the six-year conflict, which erupted in March 2011 with anti-regime protests and has killed more than 320,000 people.

But the opposition says it is forced into them by heavy government bombardment and siege tactics.

It mandates an end to hostilities, including air strikes, in specified zones for six months.

The deal came into effect on midnight Friday, with fighting subsiding, but the co-sponsors have until June 4 to submit maps finalising the borders of the zones.

It calls for continued fighting against the Islamic State group, which is largely absent from the areas where the zones will be implemented, as well as former Al-Qaeda affiliate Fateh al-Sham Front.

Fateh al-Sham has a powerful presence particularly in Idlib province, which is included in the zones, where it is allied with other opposition groups.

The deal says the "de-escalation zones" would be bordered by security areas with checkpoints and observation centres "ensured by the forces of the guarantors by consensus", but that "third-party" monitors could also be deployed.

But on Monday, Muallem rejected UN or international monitors.

"We do not accept a role for the United Nations or international forces to monitor the agreement," he said.

He added there could be a role "as the Russian guarantor has said, for military police", but it was unclear if he was referring to Syrian or foreign units.

A source at the UN told Russia's Interfax news agency that "a vote on the draft will take place possibly this week".

Western diplomats expressed reservations, saying it was premature to endorse the Astana deal until final arrangements for the proposed "de-escalation zones" were agreed.

The agreement has been received with caution by Washington, with US Defence Secretary Jim Mattis saying it was being studied.

Russia has said warplanes belonging to the US-led coalition fighting IS will be barred from operating in the four "de-escalation zones".

US Secretary of State Rex Tillerson and his Russian counterpart Sergey Lavrov are set to discuss the agreement when they meet on Wednesday in Washington.