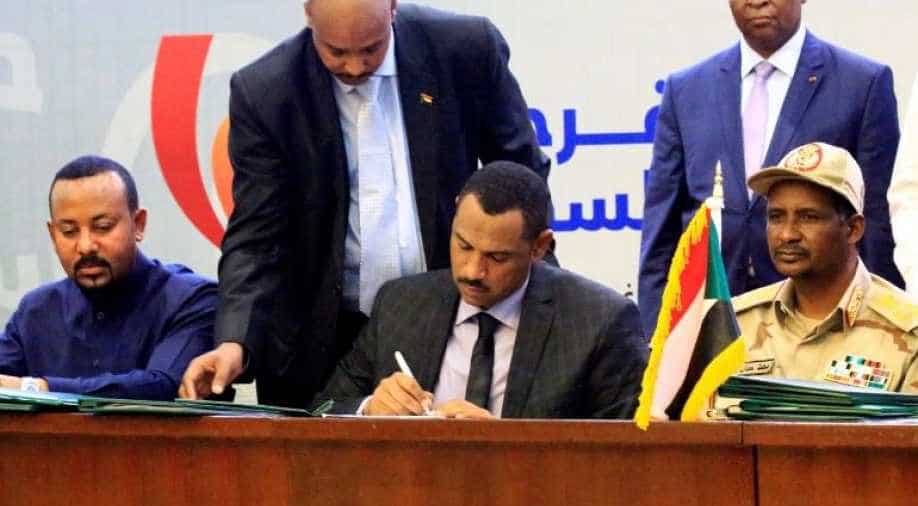 Rare scenes of jubilation filled the streets of the capital on Saturday after generals and opposition leaders signed the documents that will govern Sudan's three-year transition to civilian rule.

Sudan was expected to form its sovereign council Sunday, the first step after the signing of a transitional constitution triggered unprecedented celebration in Khartoum.

Rare scenes of jubilation filled the streets of the capital on Saturday after generals and opposition leaders signed the documents that will govern Sudan's three-year transition to civilian rule.

The ceremony in a hall by the Nile river was attended by several high-ranking foreign officials, the biggest such event in years to be held in the once-pariah state.

Worldwide congratulations poured in after the signing, which revellers and officials alike hailed as the beginning of a "new Sudan" after 30 years of rule by the now-detained Islamist general Omar al-Bashir.

"I welcome this historic moment for Sudan. This agreement responds to the demands of the Sudanese people who have tirelessly called for change and a better future," said Britain's Minister for Africa Andrew Stephenson.

US Secretary of State Mike Pompeo vowed his country would support the establishment of "a government that protects the rights of all Sudanese citizens and leads to free and fair elections".

According to the green book of documents signed on Saturday, several key steps will be taken before embarking on the long and obstacle-ridden road to 2022 polls.

The first is to come on Sunday with the planned announcement of the composition of a ruling sovereign council comprised of six civilians and five members of the military.

The body, which will replace the Transitional Military Council, will be headed by a general for the first 21 months, and by a civilian for the last 18 months of the transitional period.

Abdalla Hamdok, a former UN economist who was picked by the protest camp last week to be prime minister, will be formally appointed on Tuesday.

A cabinet is then to be formed before Sudan's new institutions can tackle the main challenges that lie ahead, first among them measures to rescue a moribund economy.

Making the most of new freedom acquired during eight months of protests that left at least 250 people dead, Sudanese families took to the streets for wild celebrations Saturday night.

Youths spilling out of honking cars drag-raced down the main Nile-side road deep into the night, while groups sang and danced the same two words echoing across the entire city: "Madaniya, Madaniya".

It loosely translates as "civilian rule" and one would be hard-pressed to find somebody on the streets of Khartoum publicly opposing that goal.

Some members of the opposition alliance that organised the protests, however, fear that the euphoria could be short-lived and deep distrust remains between the incoming sovereign council's main players.

While the power-sharing compromise reached earlier this month was widely hailed as the best Sudan could hope for, some members of the protest camp feel it short-changed their revolution.

The omnipresence in the transition of General Mohamed Hamdan Daglo, a paramilitary commander who was one of the signatories of the documents on Saturday, is one of the main causes of unease.

His forces are blamed for the deadly repression of the protests and many suspect the man best known by his nickname 'Hemeti' is simply biding his time to pounce on power and nip democracy in the bud.

Sudanese analyst Abdel Latif al-Buni stressed however that one of the most immediate perils facing the transition was divisions within the civilian camp.

Bashir, who is wanted by the International Criminal Court on genocide charges for crimes committed in the Darfur region, faces trial on corruption charges but his fate remains unclear.