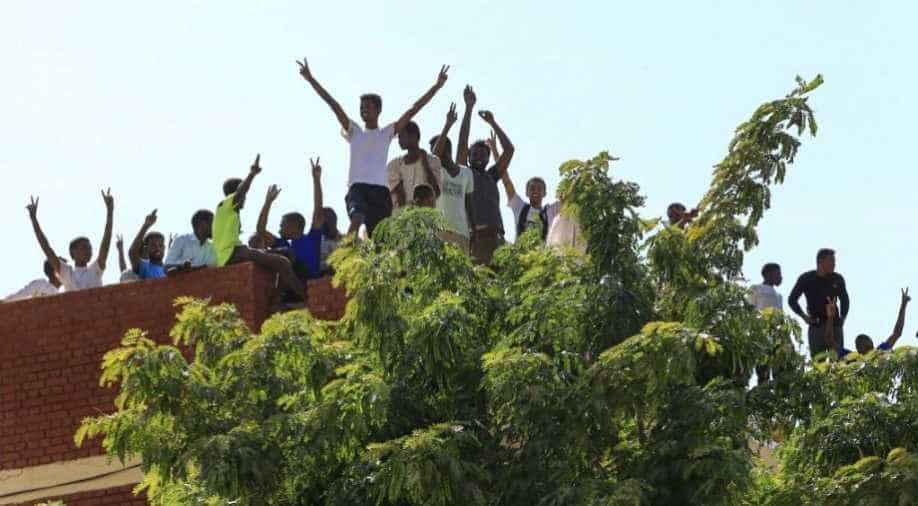 Sudanese students protest on the roof of a building overseeing a mosque in the capital Khartoum. Photograph:( AFP )

Local resistance committees and the Sudanese Professionals Association are organising a series of protests. This is being done in an attempt to reverse the military takeover

Sudanese pro-democracy groups launched two days of civil disobedience and strikes as they protested against last month's military coup. However, the participants came out in limited numbers due to interruptions in internet and phone connections.

The poverty-stricken African nation has been facing extreme chaos after the collapse of the country's government.

General Mohamed Hamdan Dagalo, who is also known as Hemedti, Burhan's deputy on the now-dissolved Sovereign Council said that General Abdel Fattah al-Burhan's moves "came to correct the course of the people's revolution, and preserve the security and stability of the country."

Local resistance committees and the Sudanese Professionals Association are organising a series of protests. This is being done in an attempt to reverse the military takeover.

Meanwhile, a teachers union claimed that used tear gas at a rally which was organised by the union as a part of the civil disobedience. As a part of the rally, dozens of teachers carried banners reading "no, no to military rule" as they called for a transition to "full civilian rule."

Sudan is already in the midst of a deep economic crisis with record inflation and shortages of basics. The improvement of the region relies on aid that Western donors say will end unless the coup is reversed.

The abrupt collapse of the country's transition to democracy has sparked an international outcry as US President Joe Biden called the military coup in Sudan a ''grave setback'' for the country.

Asserting pressure on Sudan's military junta, Biden said ''Our message to Sudan's military authorities is overwhelming and clear: the Sudanese people must be allowed to protest peacefully and the civilian-led transitional government must be restored.''