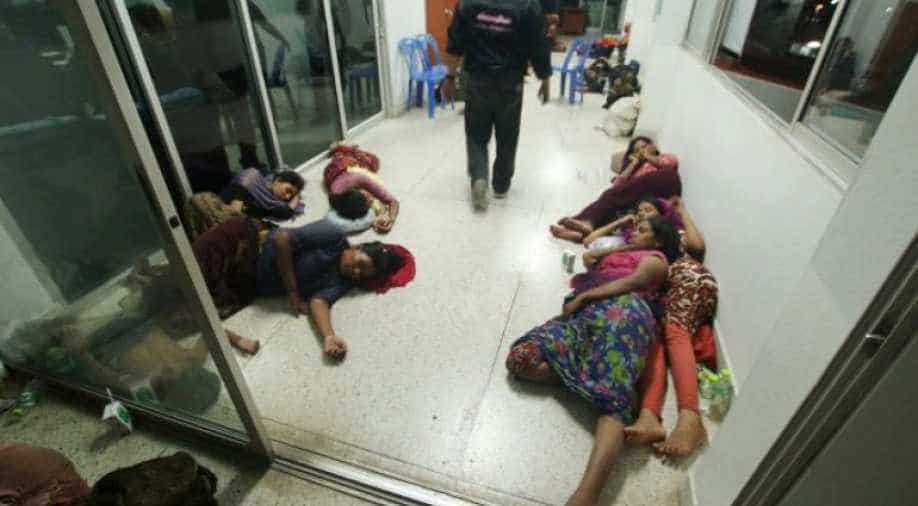 Rohingya people are seen detained in a police station after a fishing boat carrying more than sixty Rohingya refugees was found beached at Rawi island, part of Tarutao national park in the province of Satun, Thailand, bordering with Malaysia, June 12, 2019. Photograph:( Reuters )

Many Rohingya Muslims have boarded boats in recent months to try to reach Malaysia, part of what authorities fear could be a new wave of people smuggling by sea after a 2015 crackdown on trafficking.

Thai police said on Thursday there is enough evidence to press human trafficking charges against the captain and crew of a boat carrying 65 Rohingya Muslims that was shipwrecked this week on a southern Thai island.

Many Rohingya Muslims have boarded boats in recent months to try to reach Malaysia, part of what authorities fear could be a new wave of people smuggling by sea after a 2015 crackdown on trafficking.

The 65 Rohingya men, women and children were discovered on Tuesday on Rawi island off Thailand's southern Satun province where their boat had beached due to engine trouble while en route to Malaysia.

Police have already charged the crew with assisting the migrants to illegally enter Thailand.

"We have completed talking to some of the Rohingya and we now have evidence to press human trafficking charges against the Thai captain and the five Myanmar crew," Police Major General Supawat Thapkliew, the head of police in Satun, told Reuters.

"We have not completed questioning all the Rohingya to determine whether they were tricked or they came willingly," he added.

"The prime minister wants to stress that the Rohingya migration issue is important to the government and Thailand has worked with other countries on this issue continuously," Lieutenant General Werachon Sukondhapatipak, the government spokesman, told reporters.

Myanmar regards the Rohingya as illegal migrants from the Indian subcontinent and has confined tens of thousands to sprawling camps in Rakhine state segregated from the Buddhist Rakhine population since violence swept the area in 2012.

The unrest prompted tens of thousands of Rohingya to flee Myanmar by sea, an exodus that peaked in 2015 when an estimated 25,000 people crossed the Andaman Sea for Thailand, Malaysia, and Indonesia, many drowning in unsafe and overloaded boats.

More than 700,000 Rohingya fled into Bangladesh in 2017 after a crackdown by Myanmar's army, according to UN agencies.