Statues of Churchill, Gandhi at risk of attack by anti-racism protestors; UK PM terms it shameful 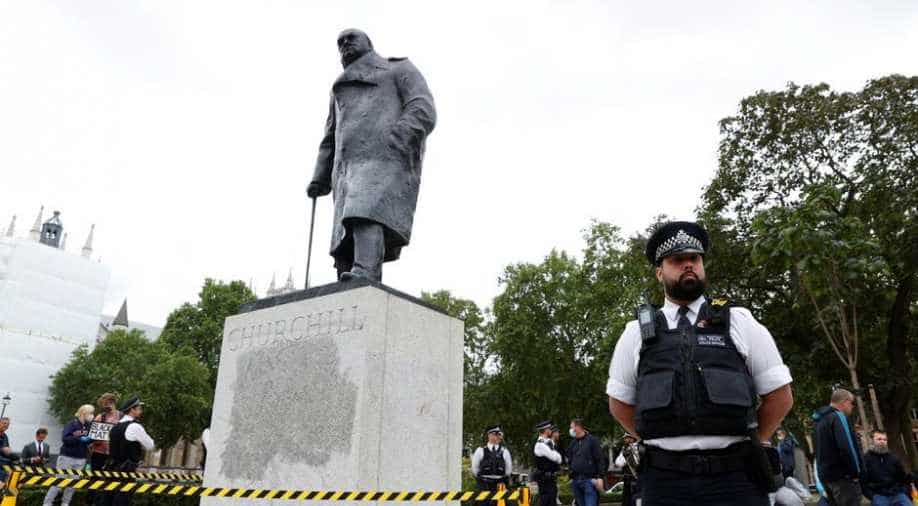 Monuments have become major focus of contention in demonstrations sparked by the death of George Floyd at the hands of a Minneapolis police officer who knelt on his neck for almost nine minutes.

British Prime Minister Boris Johnson said on Friday it was "absurd and shameful" that a statue of Winston Churchill was at risk of attack by protestors, some of whom daubed the words "was a racist" at an earlier anti-racism demonstration.

Monuments have become major focus of contention in demonstrations sparked by the death of George Floyd at the hands of a Minneapolis police officer who knelt on his neck for almost nine minutes.

"It is absurd and shameful that this national monument should today be at risk of attack by violent protestors," the British leader wrote on Twitter.

"Yes, he sometimes expressed opinions that were and are unacceptable to us today, but he was a hero, and he fully deserves his memorial. We cannot now try to edit or censor our past. We cannot pretend to have a different history," he said, calling on people to avoid protests planned this weekend.

The statue of Winston Churchill in Parliament Square is a permanent reminder of his achievement in saving this country – and the whole of Europe – from a fascist and racist tyranny. 1/8

But it is clear that the protests have been sadly hijacked by extremists intent on violence. The attacks on the police and indiscriminate acts of violence which we have witnessed over the last week are intolerable and they are abhorrent. 7/8

Meanwhile, authorities in London have boarded up the statue ahead of expected rival demonstrations by anti-racism and far-right protestors.

A protective plywood screen has been erected around Churchill's statue outside Parliament. Authorities also fenced off the nearby Cenotaph, a memorial to Britain's war dead.

Several other statues have been defaced around the country.

The statue of Mahatma Gandhi in London's Parliament Square has also been covered and boarded up ahead of another set of planned protests.

The Mayor's office confirmed that Gandhi's statue is also among the monuments being protected. Graffiti with the word "racist" near the statue at Parliament Square, which wasn't on the actual plinth as in the case of Churchill's sculpture, had evoked some anguish on social media among Indian diaspora groups.

Since then, a new petition calling for the removal of another Gandhi statue in the UK city of Leicester has attracted thousands of signatures, also triggering countering reactions.

Earlier, a statue of slave trader Edward Colston was hauled from its plinth by protestors in the English port city of Bristol on Sunday and dumped in the harbour.

A Black Lives Matter group in London said it was calling off a planned protest on Saturday because the presence of far-right activists would make it unsafe. Another anti-racism protest Friday is set to go ahead.