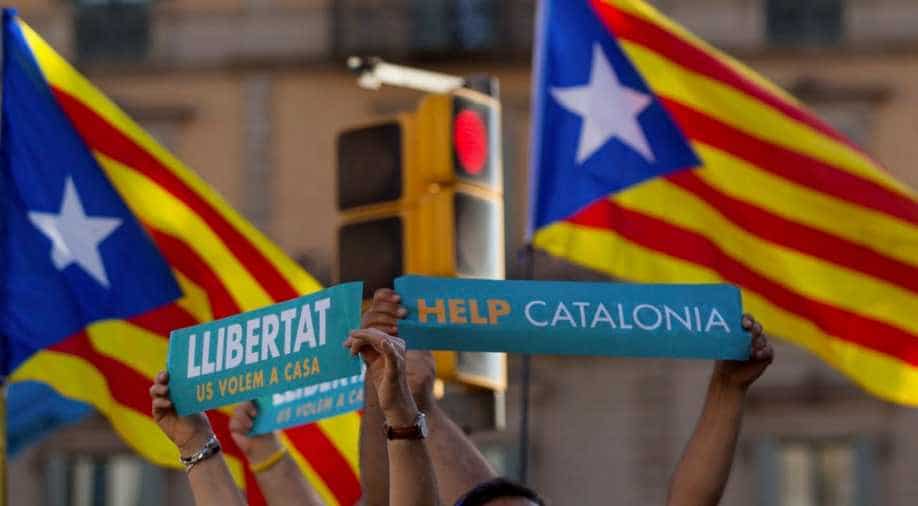 Spain hardened its line when it jailed the leaders of two of the largest separatist organisations Photograph:( Others )

Scores of people have been hurt and dozens arrested in the past two nights of clashes between protesters and police in Barcelona and other Catalan cities.

Protesters are furious at the jailing of nine separatist leaders for their role in a failed 2017 independence bid that sparked a deep political crisis.

The convictions on Monday revived tensions in the wealthy northeastern region, split between Catalans loyal to Madrid and those who want it to break away from Spain.

In Barcelona on Tuesday night, police charged hundreds of masked demonstrators who threw projectiles at officers and set garbage bins and cardboard boxes on fire.

In a tweet, Sanchez said the government "firmly and resoundingly condemns the violence that seeks to break co-existence in Catalonia."

On Wednesday thousands of protesters departed on foot along highways from five Catalan towns towards Barcelona.

They planned to gather there on Friday when unions have called a general strike in the region.

He was scheduled to meet later with the leaders of centre-right Ciudadanos and far-left Podemos.

He said he would "convey the government's determination to guarantee security, with firmness, proportionality and unity."

The separatist movement has said there will be no let-up in the protests.

They erupted after the Supreme Court on Monday convicted 12 Catalan separatist leaders of sedition over the 2017 referendum and short-lived declaration of independence.

The court handed prison sentences of between nine and 13 years to nine of them and fines to the other three.

The ruling thrust the Catalan dispute to the heart of the political debate ahead of Spain's November 10 general election, its fourth in as many years.

Police arrested 29 people in the province of Barcelona, 14 in Tarragona province and eight in Lleida, Spain's interior ministry said.

Officials said 125 people were injured in the protests, including 72 police officers, some with broken bones.

Municipal cleaning crews used hoses to clear the streets of Barcelona of debris from the dozens of fires which were set overnight.

The violent protests marked a break with the mainly peaceful and festive pro-independence rallies which have been held in Catalonia since the separatist movement gained momentum nearly a decade ago.

The separatist camp is frustrated over Catalan regional president Quim Torra's failure to deliver on his government's promise to achieve independence.

On the wall of a luxury watch shop in an upscale Barcelona neighbourhood, someone had scrawled "Torra, traitor".

"We have embarked on a road of no return," the Committees for the Defence of the Republic (CDR), a radical separatist movement, tweeted.

It called on the separatist regional government to "take a step forward by breaking with the Spanish state."

He said that would give Spain's central government a pretext to intervene in the region, as it did when it suspended Catalonia's autonomy after the 2017 independence bid.

"Do not give them what they want," he said.

Spain's conservative parties have branded Sanchez a traitor for accepting the backing of Catalan separatist parties to help him secure power in 2018, and for his willingness to negotiate with them.

The conservative parties have urged him to take a harder line against the protesters.

"In the face of the violent unrest which is raising tensions in Catalonia, Sanchez must activate the national security law," Casado said.

"It is urgent to guarantee security and public order."

Demonstrators issued calls on social media to "Turn Catalonia into the new Hong Kong", a reference to recent demonstrations against Chinese influence in that territory.