Spain: Police move in as Catalonians begin to vote in independence referendum 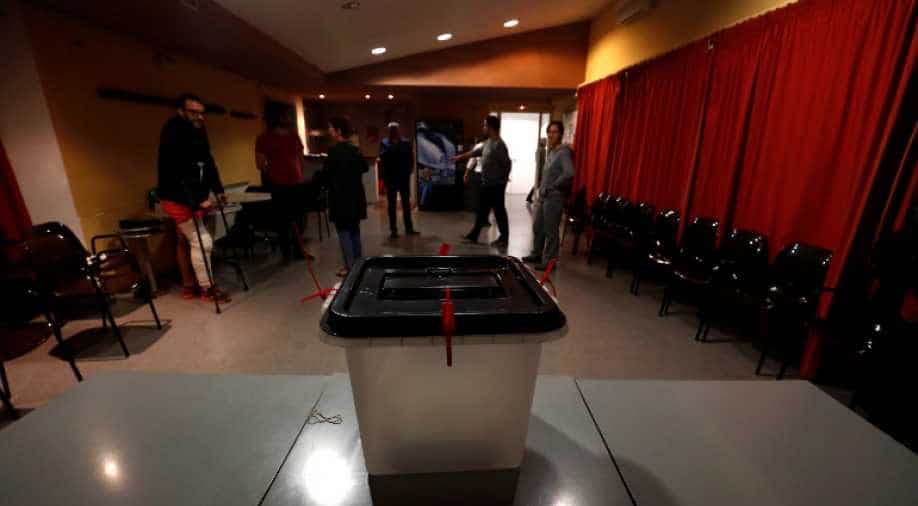 A ballot box is seen at a polling station in Sarria de Ter, Spain. Photograph:( Reuters )

Spanish police in riot gear seized ballot boxes and surrounded activist-held polling stations in Catalonia Sunday as thousands flooded the streets to vote in an independence referendum banned by Madrid.

As the vote officially opened, scenes of chaos erupted as police began moving in to prevent people from casting their ballots, forcing their way into one sports centre in the town of Girona where the region`s separatist leader was due to vote.

The drama unfolded after a night of tension in which thousands of people, both nervous and excited, had gathered outside polling stations before dawn to vote, with police under orders to prevent the ballot from happening.

Votarem, votarem!' -- Catalan for 'We will vote!' -- the crowds chanted

"Votarem, votarem!" -- Catalan for "We will vote!" -- chanted the crowds, many with their hands in the air.

As the rain poured down in Barcelona, students and activists who had spent the night in schools designated as polling stations gathered outside with locals to "defend" the vote from police as cars drove by honking their horns in support.

Catalan television broadcast footage of crowds in towns and villages all over region, whose separatist government said early Sunday the referendum would go ahead as planned.

Although the region is divided over independence, most people want to vote on the matter in legal, binding plebiscite.

"The government today is in a position to affirm that we can celebrate the referendum of self-determination -- not as we wanted, but (it will have democratic) guarantees," Catalan government spokesman Jordi Turull told a news conference.But the interior ministry said it had started seizing ballot boxes, adding police were "continuing to deploy in Catalonia" to stop the referendum.

Spain`s central government is staunchly against the vote, which has been ruled unconstitutional by the courts, and has vowed to stop it from taking place.

On orders of judges and prosecutors, police have seized ballot papers, detained key organisers and shut down websites promoting the vote.

But on the streets early Sunday, voters were determined to be heard.

"Today is a historic day for us, it`s terrific," Maria Rosa Pi-Sunyer Arguimbau, 55, said after a man carrying a ballot box jumped out of a car and ran to the door, depositing it inside as two police officers looked on across the street.

The ballot boxes have been at the centre of attention during the referendum crisis, with many wondering exactly where they were hidden and how they would be delivered to polling stations, as police were ordered to seize any material related to the referendum.

But as people crowded in front of polling stations, they started to arrive, carried in by individuals. It was as yet unclear where they came from.The planned referendum has sown divisions among Catalans and stoked passions further afield in Spain.

Whatever happens, Sunday`s referendum result will not be recognised by Madrid, and almost certainly not by the international community.

But separatist leaders are banking on a high turnout to give legitimacy to their vote.

Spain`s interior ministry said Saturday police had closed most of the 2,315 polling stations across Catalonia.

But dozens were occupied by teachers, parents, students and activists determined to let people in anyway.

Some schools designated as polling stations imagined innovative ways to stay open, organising leisure activities all over the weekend, from kids` pyjama parties to volleyball games.

A regional government source said voting may also take place in other places like health centres and even retirement homes.

Farmers and firefighters have also pledged to protect polling stations.Earlier this week, the Mossos d`Esquadra Catalan police warned about the risk of "disruption of public order" if people were prevented from casting ballots.

Ignacio Sellares, a 56-year-old tax consultant at a polling station in Barcelona said he wasn`t scared.

"Having said that, if police come with weapons and water cannons, I`m getting out of here fast!".

Madrid has sent thousands of extra police officers from other forces to Catalonia to stop the referendum from happening.

On Saturday, Catalan leader Carles Puigdemont called on those going to vote to maintain a "peaceful attitude".

That same day, thousands took to the streets across the country -- including in Barcelona -- in favour of national unity.

As well as being critical of Puigdemont, some protesters also faulted Prime Minister Mariano Rajoy`s conservative government for limiting its response to the crisis to repeating that the referendum is unconstitutional.