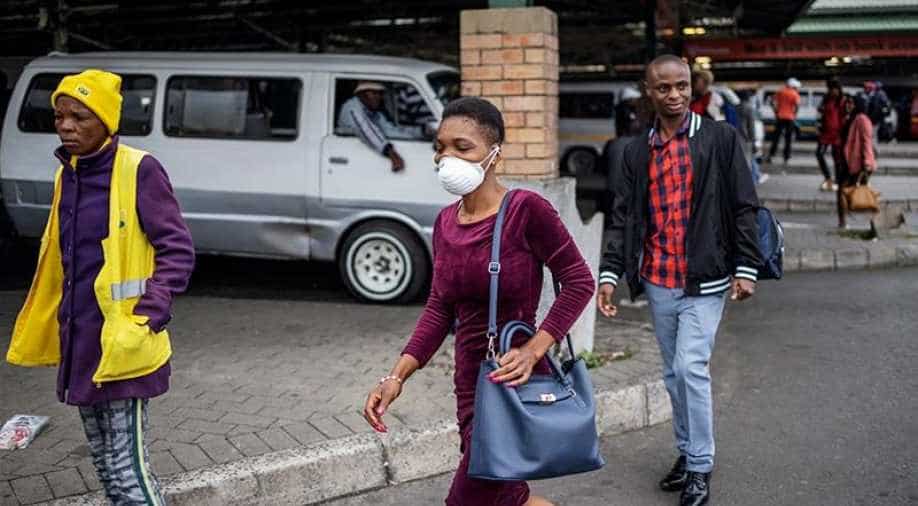 South Africa does not plan to impose lockdown or any rules for quarantine (representative image). Photograph:( AFP )

The North Gauteng High Court on Tuesday ordered a review of the current regulations of the 'Level 3' and 'Level 4' national lockdowns.

A South African court has declared that some of the government's lockdown regulations to prevent the spread of COVID-19 are "unconstitutional and invalid", but will remain in force for the next 14 days.

The North Gauteng High Court on Tuesday ordered a review of the current regulations of the 'Level 3' and 'Level 4' national lockdowns.

South Africa on Monday started 'Level 3' of a five level risk-adjusted strategy to combat the spread of the novel coronavirus that has claimed 703 lives in the country, since the lockdown started 67 days ago.

"Government has taken note of the judgment delivered by the Gauteng division of the high court today, June 2, declaring the alert 'Level 4' and alert 'Level 3' lockdown regulations unconstitutional and invalid," the government said in a statement.

"The court suspended the declaration of invalidity for a period of 14 days. This means that the alert 'Level 3' regulations remain in operation for now," it said.

The high court was approached by the Liberty Fighters Network (LFN), which argued that the lockdown restrictions were unlawful and unconstitutional because a state of emergency was not declared.

The regulations have come under fire from various organisations, opposition parties and individuals, with many citing inconsistencies as different government ministers had made conflicting statements on the implementation of the lockdown rules.

One of the biggest outcries has been about the decision to lift the ban on alcohol sales in 'Level 3', but retaining the prohibition on the sale of cigarettes and tobacco products.

Judge Norman Davis referred to a number of other lockdown regulations which appeared to be "irrational".

These included restrictions on funerals, exercising in public places, prohibiting hairdressers from reopening their business until the last level of the lockdown is reached and allowing only certain types of clothing to be purchased during the lockdown.

"One need only to think of the irrationality in being allowed to buy a jersey but not undergarments or open-toed shoes, and the criminalisation of many of the regulatory measures,? said Davis, who accepted that a number of other interventions by the government were indeed rational in combating the COVID-19 pandemic.

"Despite these failures of the rationality test in so many instances, there are regulations which pass muster. The cautionary regulations relating to education (closure of schools), prohibitions against evictions (during the lockdown)? and the closures of night clubs and fitness centres, for example, as well as the closure of borders, all appear to be rationally connected to the stated objectives,? the judge said.

The court has further directed the minister of cooperative governance and traditional affairs -- Nkosazana Dlamini-Zuma) -- in consultation with ministers concerned, to review, amend and republish the regulations with "due consideration to the limitation each regulation has on the rights guaranteed in the Bill of Rights", Davis said.

Dlamini-Zuma has been in charge of coordinating and sharing the regulatory changes with the public in live broadcasts.

"Cabinet will make a further statement once it has fully studied the judgment,? the statement issued by the government said.