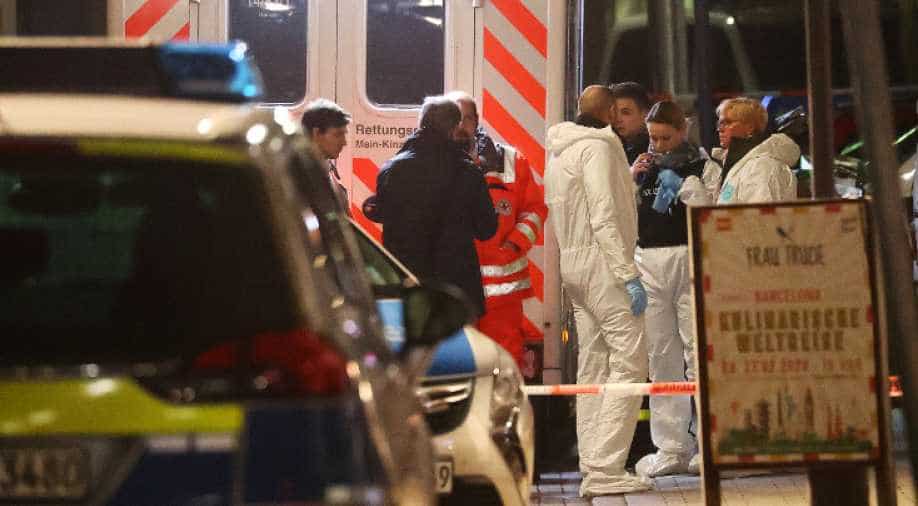 Forensic experts outside a shisha bar after a shooting incident in Hanau near Frankfurt, Germany Photograph:( Reuters )

'Racism is poison, hatred is poison and this poison exists in society and it is to blame for too many crimes,' she added.

German Chancellor Angela Merkel on Thursday confirmed that there were multiple clues indicating that a suspected gunman in Hanau had acted out of racism and right-wing extremism. She also said that the authorities would do everything possible to clarify the background to the attack.

"There are many indications at the moment that the perpetrator acted on right-wing extremist, racist motives, out of hatred towards people of other origins, religion or appearance," Merkel told reporters on Thursday.

"Racism is poison, hatred is poison and this poison exists in society and it is to blame for too many crimes," she added.

At least ten people were killed including the gunman in two shooting incidents on Thursday.

The shooter targeted shisha bars in Hanau as police launched a manhunt to nab the culprits. Police quickly moved to seal off the two streets in Hanau.

Hours after the incident, the police found the suspected gunman dead at his home. During the search at his home, investigators also found text and video material indicating "xenophobic motive" behind the shooting.

King's College London counter-terrorism expert Peter Neumann tweeted of the text that it contained "various, but mostly extreme-right views, with a do-it-yourself ideology, cobbled together out of parts found on the internet".

"The pattern is clear, and not at all new," he added.

Meanwhile, European Union expressed shock and sadness over the shooting.

"I am deeply shocked by the tragedy that took place last night in Hanau. My thoughts are with the families and friends of the victims, to whom I want to extend my sincerest condolences. We mourn with you today," European Commission President Ursula von der Leyen, a former German government minister, tweeted.

Far-right attacks have become a particular concern for German authorities.

In October, a deadly anti-Semitic gun attack in the eastern city of Halle on the holy day of Yom Kippur underscored the rising threat of neo-Nazi violence. The rampage, in which two people were shot dead, was streamed live.

Last June, a conservative politician Walter Luebcke, an advocate of liberal refugee policy, was shot at his home.

On Friday police arrested 12 members of a German extreme-right group believed to have been plotting "shocking" large-scale attacks on mosques similar to the ones carried out in New Zealand last year.