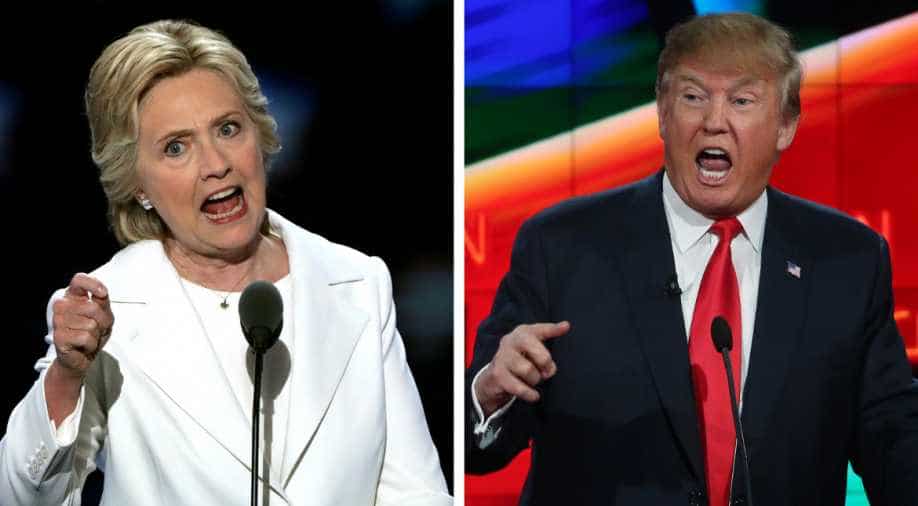 As much as fourteen women have gone on record to say that they were sexually harassed by Trump at some point in their lives. Photograph:(Getty)
Follow Us

A week short of the presidential poll in the US, Hillary Clinton has released a new advertisement. Building up on the deluge of sexual harassment accusations against Donald Trump, the ad highlights his attitude towards women. In her speeches and social media engagement, Clinton has been steadily building a case against Trump on the basis of the accounts of his alleged victims as well as own statements.

As much as fourteen women have gone on record to say that they were sexually harassed by Trump at some point in their lives. The Republican candidate also has an upcoming hearing for a child rape case against him. On a recent TV show, Trump’s campaign manager Kellyane Conway refused to acknowledge on the rape case as a serious concern. She has also predicted that Trump will win as the undecided voter has now decided against Clinton. FBI Director James Comey’s announcement about the existence of a new batch of emails with a connection to Clinton’s server seems to have rocked her campaign trail a bit.

Will leveraging herself as an upholder of women’s rights and dignity give Clinton the much-needed thrust to outscore her Republican counterpart? How does Clinton’s own track record on this issue during her husband’s presidency play out now?

Fifteen women from South Asia weigh on whether sexual harassment accusations could be the game changer in an election seeing two of the most controversial Presidential candidates in the history of American democracy.

Sexual harassment accusations have created a dent but I doubt it would change the minds of those who have decided on him. As much as I personally think he should be thrown out for his nonsense, I do not think the outcome will be significantly impacted.

No, it won’t be a significant factor for the outcome of the election.

I hope so. I would be shocked if not. Though, Hillary’s track record isn't great either. Yet she benefits because she is a woman and wouldn't be the one assaulting. Basically, I am glad I am not an American voter and don't have to choose amongst them.

If you go by the polls, his support among women is on the decline. But I don't think he ever had their overwhelming support anyway. I've met women who support Trump and they say this happened a long time ago so what's the big deal and this is meant to distract from Hillary's misdemeanours. I don't think anyone really thinks Trump is the greatest but I think most folks I've met hate Hilary more.

I would say he sure is winning the race to the bottom.

It is hard to say. There was already a negative wind. I think his comments have marred more than the women coming out. But these things are hard to say in real time. In hindsight, we will have a better picture.

Trump was doomed even before the sexual harassment thing. But the fact that women have reacted after the revelations is a manifestation of women standing up against "accepted" behaviour by men that is not right, never has been. Silence endorses things and that's what happens when it comes to men touching women and saying things they shouldn't.

It's a long answer and the US has a very long history of puritanism that makes the sex life of people in power very relevant. This is different though because here you have a sexual predator. It would be interesting to compare public reaction to Trump versus public reaction to Gary Hart.

[On the “pussy-grab” clip] This is not sexualising the US election, nor is this innuendo: this is clearly sexual assault caught on video. Of course, Trump has a point when he says Hillary turned a blind eye to Bill's gross abuse of power for sexual favours while in the Oval.

That pussy-grab audio was a shift.

I have a mixed opinion on this one. The cases about sexual harassment are indeed hampering his prospects but mainly only in cases of undecided voters. It's sad but one continues to see many Trump women supporters persistently cheering for him despite his misogynistic views and actions. However, one needs to realise that it is the swing states and swing voters who can make or break the Nov 8 election. It is in this context women voters can make a huge difference and showcase their power as an electoral base. As Michelle Obama said, "High time women stand up and say, enough is enough!"

There has been an attitudinal shift in the society. It is difficult to get away with impunity. People like Trump are increasingly being held accountable for their misdemeanours. Victim shaming is not all that rampant and those indulging in it are getting called out.

Yes, Hillary is hawkish. But that’s how most politicians are. This is a time in the history of the USA where somebody like her is needed. A purely leftist candidate will not be able to handle a fast polarising world.

Yes, I think the harassment charges are going to significantly mar Trump’s prospects.

Ultimately, and sadly, not much.

It is a toss-up. But I think Trump is a lot like (Narendra) Modi. His core voter base is unlikely to be bothered by bad revelations about him.