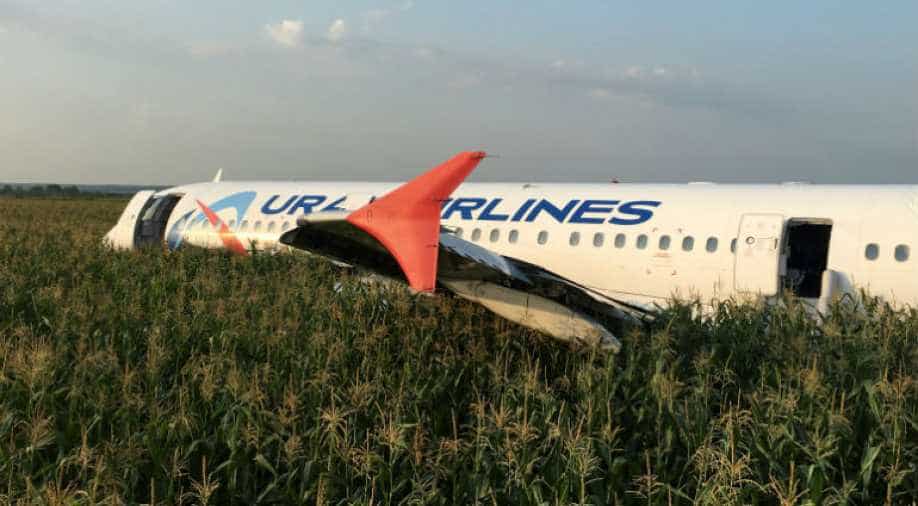 The Ural Airlines plane following an emergency landing in a field near Zhukovsky International Airport in Moscow Region, Russia, on Thursday. Photograph:( Reuters )

According to the latest data, 76 people, including 19 children, have sought medical assistance in the wake of the hard landing

Russian President Vladimir Putin awarded Heroes of Russia titles to the two pilots who landed their plane in a cornfield as both engines failed after colliding with a flock of gulls during takeoff. The pilots and the crew were swiftly hailed for their high professionalism that saved lives of all 233 people on board the fully loaded plane.

"I signed a decree to award the crew of an aircraft, which, as you know, performed an emergency landing at Zhukovsky airport. The aircraft commander and the second pilot were awarded the Hero of the Russian Federation titles, all other crew members were awarded the Order of Courage," the head of state said opening a meeting with the permanent members of the Russian Security Council.

The Airbus A321 aircraft, belonging to Russia's Ural Airlines, was bound for Crimea's capital of Simferopol. It took off from the Moscow Region's Zhukovsky airport at 6:05 am local time (3:05 GMT) on Thursday. Just after taking off from from the runway, it struck a flock of gulls, which disrupted the work of the plane's both engines and forced it to land on a nearby cornfield.

"Numerous birds hit the engines of the plane making the U6178 flight Zhukovsky-Simferopol from Zhukovsky. The plane was forced to land. The crew and passengers have not been hurt," Ural Airlines reported soon after the incident.

"The landing gear was retracted during the landing. The crew members have turned the engines off before the landing," Rosaviatsiya said, stressing that there was no fire on board.

The agency added that the crew had evacuated the passengers properly, using emergency escape slides.

According to the latest data, 76 people, including 19 children, have sought medical assistance in the wake of the hard landing, with only one woman remaining in hospital in the Moscow region's town of Ramenskoye. Her condition is assessed as being "close to satisfactory".

Soon after the information that the crew managed to safely land the fully loaded plane after both engines failed emerged, the accident has been dubbed in media as a "miracle," with media swiftly posting photos of the captain, pilot Damir Yusupov, and other crew members, taken from their social media accounts.

Russian presidential spokesman Dmitry Peskov later said that the Kremlin viewed the pilots as heroes, who saved dozens of lives.

"The plane's passengers and crew remained alive, we wish a speedy recovery to those injured, and congratulations to the hero pilots who saved lives and landed the plane," Peskov told reporters.

The Russian Investigative Committee, meanwhile, announced that it had launched a criminal probe into violation of air traffic safety rules and aircraft operation after the accident involving the A321 plane.

"Investigative bodies of the Moscow interregional transport prosecutor's office of the Investigative Committee have launched a criminal proceeding for offenses under Part 1 of Article 263 of the Russian Criminal Code (violation of the rules for traffic safety and operation of the air transport) after the hard landing of the passenger aircraft traveling from Moscow to Simferopol," the committee said.

In line with a standard procedure, the crew have been grounded by Ural Airlines for the period of the check.

The Interstate Aviation Committee (IAC), headquartered in Moscow, has set up a special commission to investigate the reasons behind the hard landing. Experts from France's Civil Aviation Safety Investigation Authority (BEA) have already announced that they will arrive in Moscow on August 16 to take part in the investigation.

Meanwhile, a representative of Russia's Federal Air Transport Agency told Sputnik that the flight data recorder and the cockpit voice recorder of the aircraft had not been damaged and would be sent to the IAC.