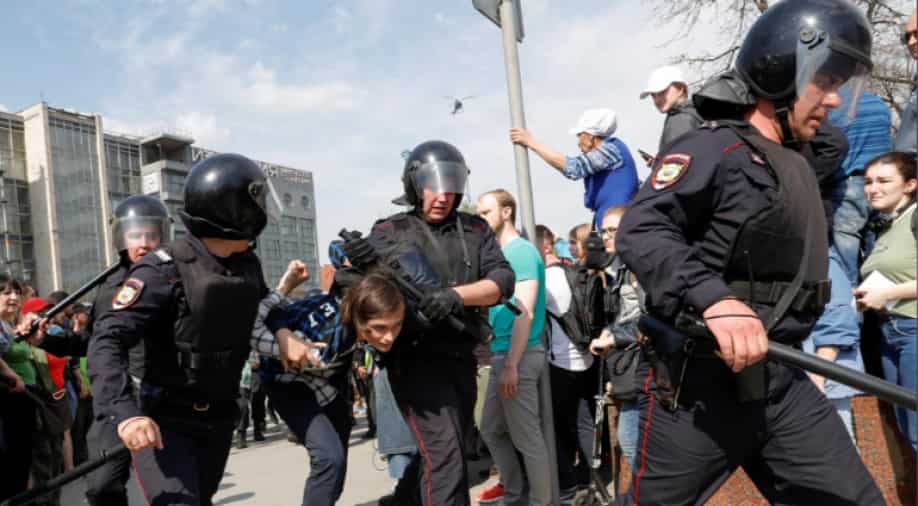 Police in Russia have detained over 1,000 people across the country at protests. Photograph:( Reuters )

Russian opposition leader Alexei Navalny and more than 1,000 anti-Kremlin activists were detained by police on Saturday during street protests against Vladimir Putin ahead of his inauguration for a fourth term as president.

Navalny had called for demonstrations in more than 90 towns and cities across Russia against what he says is Putin's autocratic, tsar-like rule.

"We will force the authorities, made up of swindlers and thieves, to take into account the millions of citizens who did not vote for Putin," Navalny said beforehand.

Putin overwhelmingly won re-election in March, extending his grip over Russia for six more years - a tenure of 24 years that would make him Moscow's longest-serving leader since Soviet dictator Josef Stalin.

Navalny, who was barred from running in the election on what he says was a false pretext, was detained soon after showing up on Moscow's Pushkin Square, where young people chanted "Russia without Putin!" and "Down with the Tsar!".

Video footage showed five policemen hauling him to a waiting van by his arms and legs, a scene that was repeated dozens of times with his supporters. Moscow police said he had been detained for organising an unsanctioned rally.

Navalny, who has been detained and jailed numerous times for organising similar protests, had managed to address his supporters briefly, saying he was glad they had shown up.

One protester in Moscow, donning a rabbit's mask with the legend "Tsar of the Animals" said he was unsure what the protest would achieve.

"I have the feeling that people are gathering just to let off steam and that nothing will change," said the 31-year-old man called Alexander, who declined to give his surname.

OVD-Info, a rights organisation that monitors detentions, said it had received reports of police detaining over 1,000 people across Russia, nearly 500 of them in Moscow. It cited its own sources at the Moscow protest as saying pro-Kremlin Cossacks had beaten protesters with leather whips, sparking a fight.

Protests also took place in the Far East, Siberia and St Petersburg. In the Urals city of Yekaterinburg, around 1,500 km (900 miles) east of Moscow, a Reuters reporter saw more than 1,000 people protesting, some shouting "Down with the Tsar!"

Father Of The Nation

Putin, 65, has been in power, either as president or prime minister, since 2000.
Backed by state TV and the ruling party, and credited with an approval rating of around 80 percent, he is lauded by supporters as a father-of-the-nation figure who has restored national pride and expanded Moscow's global clout with interventions in Syria and Ukraine.

The authorities regard most of the protests as illegal, arguing that their time and place was not approved beforehand and that the police have a duty to protect public order.

Putin has dismissed Navalny as a troublemaker bent on sowing chaos on behalf of Washington. Prime Minister Dmitry Medvedev, a close Putin ally, has called Navalny a political charlatan.

Putin is due to be inaugurated on Monday in a Kremlin ceremony heavy on pomp.

With more than 56 million votes, almost 77 percent of the total, his March election win was his biggest ever and the largest by any post-Soviet Russian leader, something he and his allies say gave him an unequivocal mandate to govern.

European observers said there had been no real choice in the election, and complained of unfair pressure on critical voices. Critics like Navalny accuse Putin of overseeing a corrupt authoritarian system and of annexing Ukraine's Crimea illegally in 2014, a move that isolated Russia internationally.