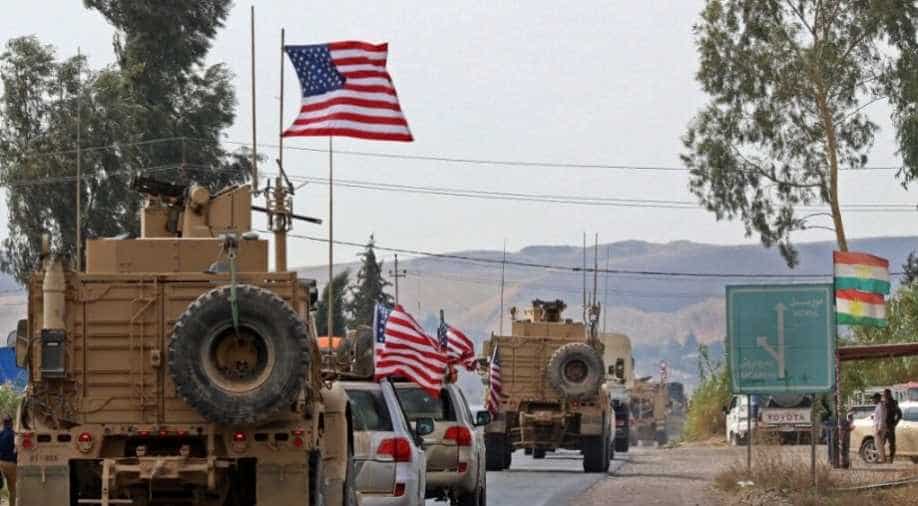 Some 7,500 foreign troops are in Iraq as part of the US-led coalition helping local troops fight jihadist remnants, but those numbers are being significantly drawn down this month.

Two rockets slammed into the Iraqi capital's high-security Green Zone early Thursday, hours before US-led forces were set to pull out of a second base in the country.

Some 7,500 foreign troops are in Iraq as part of the US-led coalition helping local troops fight jihadist remnants, but those numbers are being significantly drawn down this month.

The alliance is temporarily bringing some trainers home as a precautionary measure against the coronavirus pandemic and is also leaving some Iraqi bases altogether.

Those bases and foreign embassies, particularly the American mission, have been targeted in more than two dozen rocket strikes since late October.

The attacks, which the US has blamed on an Iran-backed armed group, have prompted fears of a proxy war on Iraqi soil.

Before dawn on Thursday, two rockets punched into an empty square near an Iraqi security headquarters in the Green Zone, where government buildings and foreign embassies are based, Iraqi security forces said in a statement.

An Iraqi security source told AFP the intended target appeared to be the US embassy, a sprawling compound a few hundred metres (yards) further south on the banks of the Tigris.

There were no reports of casualties, but other attacks have been deadly.

Coalition transfers base
Earlier this month, two US military personnel and a British soldier were killed in a rocket attack on Taji airbase north

of Baghdad, that was hit again two days later.

The 5,200 US troops stationed across Iraqi bases make up the bulk of the coalition force helping hunt down Islamic State group sleeper cells across the country.

Iraq declared IS defeated in late 2017, and the coalition is now implementing plans developed last year to consolidate its troop presence across the country.

Around 300 coalition troops left the western Qaim base in mid-March, handing it over in full to Iraqi troops.

On Thursday, around 800 troops were set to leave the northern Qayyarah air base, used in 2016 and 2017 to help plan the fight against IS in the nearby city of Mosul.

"The coalition had a small area inside the base and we will have several hundred troops departing this base and eventually leaving Iraq," Caggins said.

The departing forces include US and French troops as well as civilian contractors, according to a coalition statement.

In the coming weeks, they will also leave an expansive base in Kirkuk.

Rockets have rained down on both Qayyarah and Kirkuk in recent months, with one late December attack killing a US contractor stationed in Kirkuk.

The US has blamed those attacks on Kataeb Hezbollah, an Iran-backed group within the Hashed al-Shaabi military network.

The Hashed has been formally integrated into the Iraqi state's security forces but more hardline groups continue to operate independently.

This month's attacks, however, have been claimed by a previously unknown group identifying itself as Usbat al-Thaereen (League of the Revolutionaries).

In online videos set to music, masked men carrying weapons rail against the "American Satan" and pledge to avenge "victims" of US airstrikes on Iraqi forces.

The coalition, however, expects the group is an amalgamation of more well-known, anti-US groups.

"It's the same old actors, and they're organising themselves slightly differently," a senior coalition official told reporters.

The global alliance has simultaneously been redeploying training forces who had been coaching Iraqi troops.

Trainers amount to a third of the total coalition force.

British, French, Australian and Czech troops coaching Iraqi counterparts were being temporarily sent home as Baghdad had put a hold on training operations to prevent the spread of COVID-19.

The US embassy on Thursday also said it was drawing down staff "due to a combination of security conditions and restricted travel options as a result of the global COVID-19 pandemic".

At least 36 Iraqis have died from the respiratory illness and more than 380 other cases have been confirmed, according to the latest toll from Iraqi authorities.

But there are fears the real number of sufferers is much higher, as only around 2,000 of Iraq's 40 million people have been tested.

A spike in cases could overwhelm the country's dilapidated health system, ravaged by years of conflict and slim investment by government authorities.