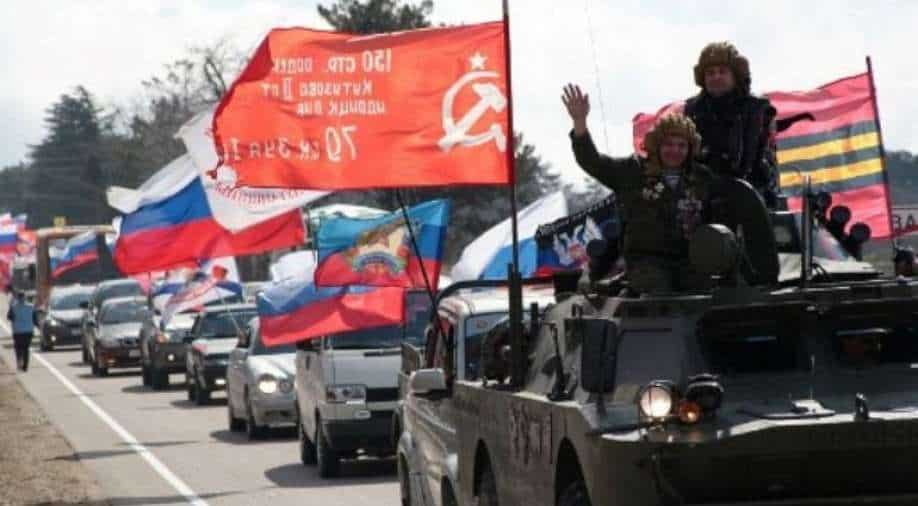 File photo: Motorists parade with their cars decorated with flags to mark the fifth anniversary of Russia's annexation of Crimea, in Sevastopol on March 16, 2019. Photograph:( AFP )

Despite Russia's assault within the country, the United States has recognised Ukraine's sovereignty.

US Defense Secretary Lloyd Austin said in a meeting with Ukraine's President Volodymyr Zelenskyy on Tuesday that the United States and its allies support Ukraine's authority in the future of their foreign policy.

As Russia's annexation of Crimea threatens Ukraine's territorial integrity, Zelenskyy has stated that the United States is the country's "primary partner in security and defence."

"US support for Ukraine’s sovereignty and territorial integrity is unwavering," Austin said.

"So we again call on Russia to end its occupation of Crimea, to stop perpetuating the war in eastern Ukraine, to end its destabilizing activities in the Black Sea and along Ukraine’s borders, and to halt its persistent cyberattacks and other malign activities against the United States and our allies and partners," Austin said during a press conference in Kyiv alongside Zelensky.

We again call on Russia to end its occupation of Crimea, to stop perpetuating the war in eastern Ukraine, to end its destabilizing activities in the Black Sea and along Ukraine’s borders, and to halt its persistent cyber attacks. pic.twitter.com/LgXdKWYCfN

Relations between Russia and the United States have reached a post-Cold War low.

In an effort to demonstrate unity in military reforms, the United States has continued to step up and collaborate with Russia's neighbours such as Ukraine.

Following the overthrow of Ukraine's Moscow-friendly president in 2014, Russia seized the Crimean Peninsula.

Moscow has also backed a separatist conflict in eastern Ukraine, which started weeks after Crimea's takeover and has killed over 14,000 people.

The annexation of Crimea, as well as Russia's support for separatists in eastern Ukraine, have brought Moscow-West ties to post-Cold War lows.

Ukraine's pursuit for future NATO membership has been regarded by the Kremlin as a red line and a serious danger to national security.

Austin stated following his meetings in Kyiv on Tuesday that "no third nation has a veto over NATO's membership choices."