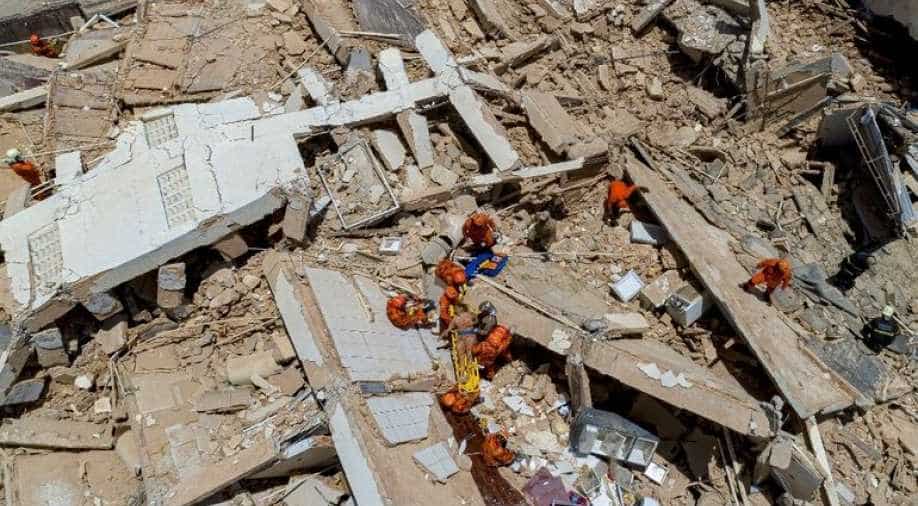 Firefighters rescue a survivor among the debris of the seven-storey residential building that collapsed early morning Photograph:( AFP )

Firefighters were searching for at least nine people missing after a seven-story residential building collapsed in northeast Brazil.

Firefighters were searching for at least nine people missing after a seven-story residential building collapsed in northeast Brazil on Tuesday, officials said.

Nine people have been pulled alive from the wreckage of the building in Fortaleza, capital of Ceara state, after it imploded, sending thick clouds of dust into the air.

Among those rescued was architecture student David Sampaio, who was located after sending a selfie to his WhatsApp chat group showing himself smiling and with his thumb up while trapped under the rubble.

State governor Camilo Santana said no one had been found dead so far, correcting earlier firefighter reports of one fatality. A spokesman confirmed to AFP late Tuesday that rescuers had not found any bodies.

Eighteen people were believed to have been in or near the building when it collapsed.

"So far, nine victims have been rescued alive," said a joint statement by Ceara's government and the Fortaleza mayor's office.

It was not immediately clear what caused the building to collapse at around 1330 GMT, when most residents would have been at work.

The president of the Regional Council of Engineering and Agriculture of Ceara, Emanuel Maia Mota, said the building "was undergoing renovations", without giving more details.

Piles of debris wrapped in a cloud of dust were seen in images broadcast on local TV minutes after the collapse of the building, which is surrounded by houses and other seemingly modern properties.

Building collapses in Brazil tend to happen in poor neighbourhoods, known as favelas, where illegal construction is rampant.

But the building was in Dionisio Torres, an upscale neighbourhood of Fortaleza, and close to Iracema Beach, one of the main attractions in the area.

In April, 24 people were killed when two buildings in a favela in Rio de Janeiro collapsed after several days of heavy rains.