Ramallah warns of a religious war, rakes up Russia 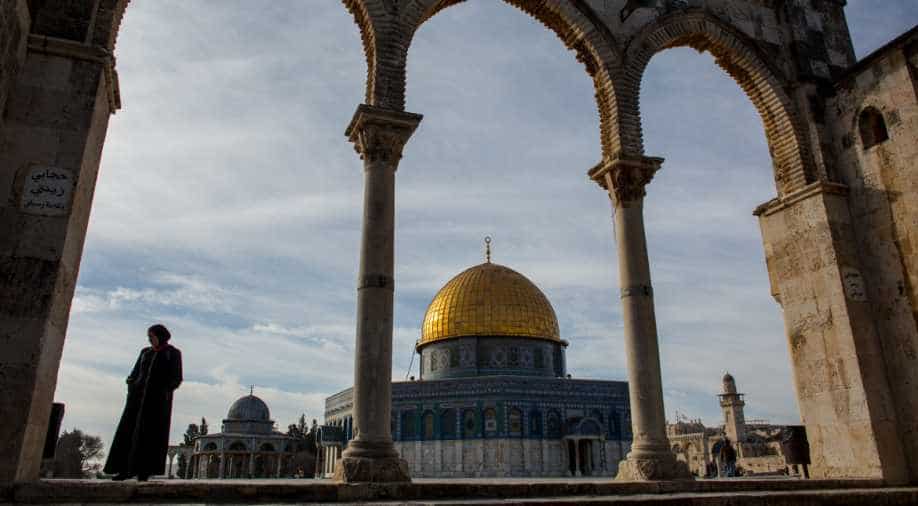 Representative picture. A woman stands in front of the Dome of the Rock at the Al-Aqsa mosque compound in the Old City on January 17, 2017 in Jerusalem, Israel. Photograph:( Getty )

Jerusalem is the heart of Israel and Palestine and it beats at the Temple Mount, as Jews call it, or Haram esh-sharif, as Muslims refer to it. A confluence of the three biggest monotheistic religions, this is where Abraham attempted to sacrifice his son Issac before God's last second intervention. Crusaders turned it into a church. The third-most revered site in Islam, it is here that Allah asked the prophet to look at Kaaba. Hence, jurisdiction over this edifice is a highly sensitive matter.

East Jerusalem is the home of the Dome of the Rock. In possession of the Western part, Israel annexed the East from Jordan in and since then, to keep the peace, Jordan manages Al Aqsa mosque's affairs through a waqf board.

But now, Donald Trump says he will move the American Embassy from Tel Aviv to Jerusalem, which in effect is America’s strongest acknowledgment of Jerusalem being Israel’s capital.

To find out what the Palestinians are thinking, I travelled to Ramallah, barely a fifteen minute drive from Jerusalem, but an hour-long wait at the check point.

A city within a city, the thick cement wall divides Israel from Palestine, and boards warn Israelis from entering the enemy territory.
Inside, the wall is decorated with grafitti about the Palestinian movement and sketches of the leader of the Palestinian Liberation Organisation leader, Yasser Arafat.

Jerusalem doesn't belong to Israel, says Abel Taqz, a member of the Palestinian People's Party, which played a big role in the first Palestinian intifada. Taqz is furious at Donald Trump for wanting to shift the embassy. He says this would end the peace process and the two-nation solution would lose all meaning.

His room is decorated with revolutionary posters. One of them depicts a tree with long roots. Taqz explains, "This shows our roots are deep." Taqz's intention is to let Trump know that Palestinians haven't forgotten their roots. The threat is a veiled concern. He fears the new American president may bring chaos upon the region.

"If Palestinian people lose hope of a two-state solution...And Israel is not willing to solve the problem and keep building settlements in Palestinian lands, it means there will be no hope for the people. And when people lose hope, anything can happen. Palestinian problem is the core issue of conflict in the Middle East and there is a danger of religious wars in the region. If Donald Trump supports Netanyahu's plans for a Jewish state, other islamic nations will support an Islamic state in Palestine. This will redirect the whole issue from political to a religious one and this can only result in a violent war, which will affect countries well beyond these two nations", he said.

Of the two parties, Fatah and Hamas, both agree that there will be violence if the US takes this step. But the ruling party, Fatah has a different plan to take on the might of the US.

A party member Amin Shooman says, "In Syria after Russia entered, it ended the war in Aleppo and everything is good now. We hope what happened in Syria, happens in West Bank and Putin stands with the Palestinians and demands from Trump that he doesn't move the embassy to Jerusalem."

Russia has already been trying to bring the two Palestinian factions, Fatah in Ramallah and Hamas in Gaza Strip, together.

Fayez Warda, a Hamas leader who has been arrested several times both by the Israelis and Fatah, says, “Our view of Russia is different from America. We look at Russia as a friend and they are holding reconciliation between Hamas and Fatah.”

It is evident Russia is being seen as a formidable power in the region. After the Syrian success, the Palestinians want Russia to play a much bigger role in the Israel-Palestine conflict. Palestinian parties want Russia to take on Israel and the US on its behalf. Will Russia give in to the dream of regional hegemony or use this as leverage to crack a deal with the United States for economic purposes?

Trump called Netanyahu within days of taking power and even though he held on to the announcement of moving the embassy, soon after the phone call Israel restarted work on settlements in east Jerusalem.