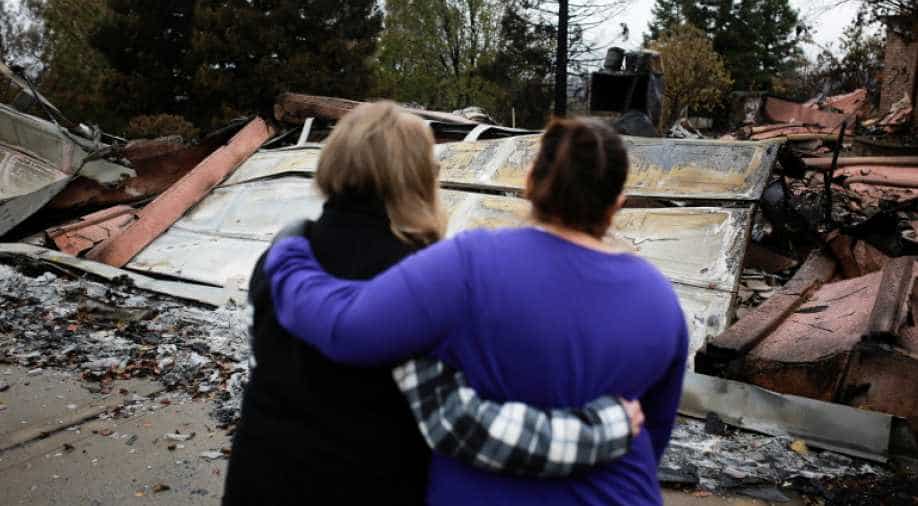 At least 84 people died in the Camp Fire which started more than two weeks ago, making it one of the deadliest US wildfires in the last 100 years. Paradise was a popular destination for retirees and two-thirds of the victims named so far were aged over 65.

More rain is forecast for northern California over the weekend, boosting firefighters` efforts to extinguish the last of the wildfires that have raged there for two weeks, but raises the risk of flash floods and landslides in the scorched Sierra Nevada foothills.

The wet weather is also expected to complicate efforts to locate victims of what is called the Camp Fire, which virtually obliterated the city of Paradise, 175 miles (280 km) northeast of San Francisco, on November 8.

Between 1 to 3 inches (2.5-7.5 cm) of rain is expected to fall between Friday and Sunday, adding to the 3 inches that already fell this week, the National Weather Service (NWS) said.

"Flash floods and debris flows will be a particular threat in the wildfire burn areas," the NWS said in a notice warning of the risk of flash floods through late Friday afternoon. "Heavy rainfall at times is possible over the burn areas with the greatest threat expected today."

That risk is low for thousands of evacuees who have fled the Camp Fire and are sheltering outside areas prone to mudslides.

At least 84 people died in the Camp Fire which started more than two weeks ago, making it one of the deadliest US wildfires in the last 100 years. Paradise was a popular destination for retirees and two-thirds of the victims named so far were aged over 65.

As many as 560 people are still unaccounted for. That number has fluctuated widely over the past week, hitting a high of more than 1,200 over last weekend.

The fire was 95 per cent contained across 154,000 acres, officials said late Thursday.

"All containment lines continued to hold throughout the day with the rain assisting in extinguishing hot spots and smoldering fire," the California Department of Forestry and Fire Protection (Cal Fire) said late Thursday.

More than 800 volunteers and police officers spent the Thanksgiving holiday combing through the wreckage, searching for the remains of victims killed in the blaze as the ongoing rains looked set to complicate their work.

Butte County Sheriff Kory Honea has said the rain would make going through debris more difficult, but he was less concerned about remains washing away than the headaches posed by mud.

He has also warned that as all that remains of victims may be "very small bone fragments," some of them may never be found.

The county has crews working around the clock laying sand bags and bags of hay to prevent debris from burnt homes being washed into streams and polluting the water supply.

"We`re doing everything we can to prepare for this," Butte County assistant director for public works Radley Ott told KRCR TV.

Hundreds of people forced to flee Paradise spent Thanksgiving in warehouses in the nearby city of Chico. Celebrity chef Jose Andres was among the volunteers bringing some festive cheer by cooking Thanksgiving meals for evacuees.

The cause of the Camp Fire, which destroyed more than 13,500 homes, remains under investigation.

A separate California wildfire - the Woolsey Fire, which killed three people and threatened the wealthy beachfront enclave of Malibu near Los Angeles - was declared 100-percent contained on Wednesday.