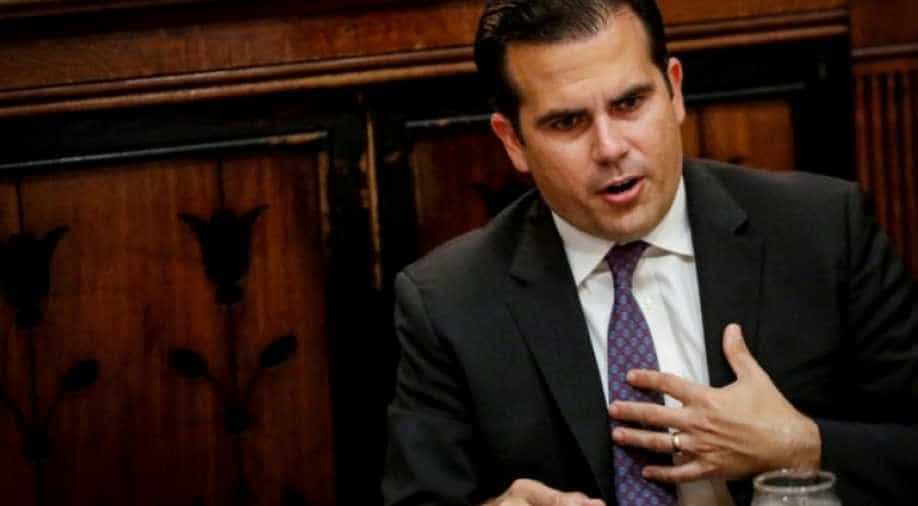 The July 13 publication of sexist and homophobic chat messages between Rossello and top aides unleashed simmering resentment over his handling of devastating 2017 hurricanes.

Puerto Rico's governor on Sunday said he would not seek re-election next year but refused to resign as the island braced for more protests by demonstrators demanding he steps down over offensive chat messages.

A day before a planned general strike and massive street demonstrations in the bankrupt US territory, Ricardo Rossello, 40, said he respected the wishes of Puerto Ricans and would not seek a second term in November 2020 elections.

He also said he would resign as head of his New Progressive Party (PNP) but would remain as governor until the end of his term in January 2021.

"I know that apologizing is not enough," Rossello said in a video posted on Facebook. "A significant sector of the population has been protesting for days. I'm aware of the dissatisfaction and discomfort they feel. Only my work will help restore the trust of these sectors."

His comments drew outrage from many Puerto Ricans, with social media videos showing San Juan residents leaning out of apartment windows banging pots and pans in the third day of so-called "cacerolazo" protests.

The July 13 publication of sexist and homophobic chat messages between Rossello and top aides unleashed simmering resentment over his handling of devastating 2017 hurricanes, alleged corruption in his administration and the island's bankruptcy process.

''#Resign Ricky isn't just a call for him to resign from the party, but from his seat as the top official," tweeted Linda Michelle, an industrial engineer and Puerto Rico radio personality. "Whoever wasn't sure about going to the march tomorrow has now made up their mind to go."

Puerto Rico's non-voting representative to the US Congress, as well as Democratic presidential candidates and lawmakers,  have called for the governor to step aside after nine days of sometimes violent protests.

"Once again: Rosselló must resign," tweeted US Representative Alexandria Ocasio-Cortez in response to his video.

Once again: Rosselló must resign. https://t.co/bu2iz93yQX

But Puerto Rico's Senate President Thomas Rivera Schatz, who may take over leadership of the pro-statehood PNP, said Rossello's actions "put an end to part of the controversies and trauma hitting our people."

Puerto Rico House Speaker Carlos Mendez, also of the PNP, appointed an independent panel on Friday to investigate whether the chats warranted impeachment.

"I welcome the process started by the legislative assembly, which I will confront with complete truth," Rossello said in the video.

The political turmoil comes at a critical stage in the US territory's bankruptcy process as it tries to restructure around $120 billion in debt and pension obligations.

It has also raised concerns among US lawmakers who are weighing the island's requests for billions of federal dollars for healthcare and work to recover from Hurricane Maria, which led to nearly 3,000 deaths.

Martin, a target of the governor's chats, said he would march with protestors on Monday when some businesses have said they will close after trade unions called a national strike.

"I want to feel the power of the people," Martin, 47, said in a Facebook video, urging legislative leaders to start the impeachment process.