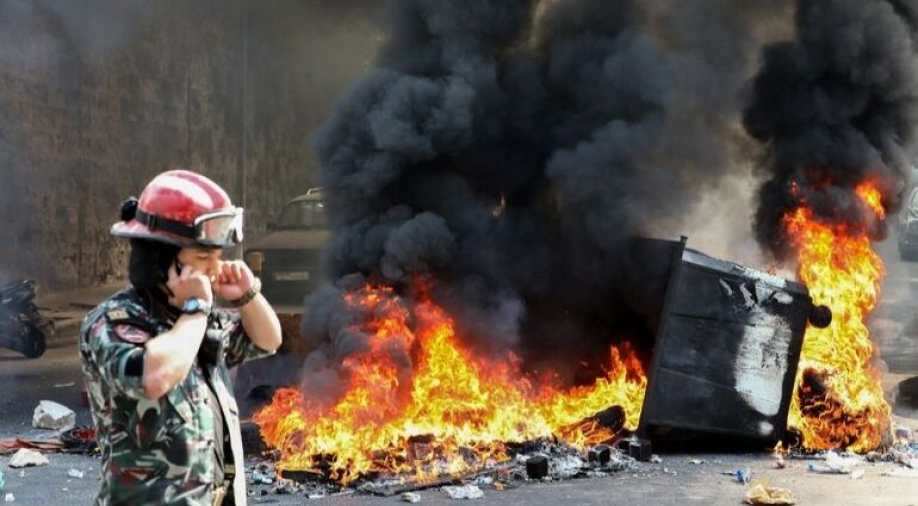 A Lebanese firefighter walks past a burning dumpster during a demonstration in central Beirut's Martyr Square. Photograph:( AFP )

A skirmish broke out as protesters tried to break through security barriers in front of the cabinet office.

Hundreds of people protested in Lebanon's capital Sunday over increasingly difficult living conditions, amid fears of a dollar shortage and possible price hikes.

A skirmish broke out as protesters tried to break through security barriers in front of the cabinet office and anti-riot forces pushed them back with shields and batons, an AFP photographer said.

Around 500 people, some carrying Lebanese flags, had gathered earlier in the capital's central Martyrs' Square to march to the seats of government and parliament, the photographer said.

"Revolution, revolution," cried some of the protesters.

Outside parliament, dozens of men and women streamed in from a side street under the watchful eye of security forces, another AFP reporter said.

Others chanted a popular refrain of the 2011 Arab Spring protests across the region: "The people want the fall of the regime".

"We toil day and night just to be able to live," said a 52-year-old Lebanese woman, asking to remain anonymous.

"They've starved us, stolen from us. Enough is enough," she told AFP, visibly enraged.

Parliament in July passed an austerity budget aimed at rescuing an economy crumbling under massive debt and unlocking billions of dollars in international aid.

This week, fears of a dollar shortage have sparked anxiety over a possible devaluation of the Lebanese pound and price hikes.

Local press reported that banks and money exchange houses were rationing their sales of dollars, which are used alongside the pound in daily transactions.

The head of the central bank has denied that the country is facing a currency reserve crisis, but it has become very difficult to withdraw dollars from ATMs in Beirut.

"There's a real problem with the high cost of living," said a 33-year-old protester who gave his name as Ali Hashem.

"The pound is getting weaker and the central bank won't admit it," said the bearded young man, a black and white keffiyeh scarf draped over his head to keep off the beating sun.

In the northern seaside city of Tripoli, dozens of protesters also gathered, some setting fire to tyres, the National News Agency said.

Petrol station owners on Thursday declared a strike over banks refusing to supply them in dollars needed to pay importers.

But they suspended it the following day after reaching a deal with the government to pay suppliers in Lebanese pounds.

Economic growth in Lebanon has plummeted in the wake of repeated political deadlocks in recent years, compounded by eight years of war in neighbouring Syria.

Lebanon's public debt stands at around $86 billion -- more than 150 per cent of gross domestic product (GDP) -- according to the finance ministry.

Eighty per cent of that figure is owed to Lebanon's central bank and local banks.

The small Mediterranean country has promised donors to slash public spending as part of reforms to unlock $11 billion in aid pledged at a conference in Paris last year.