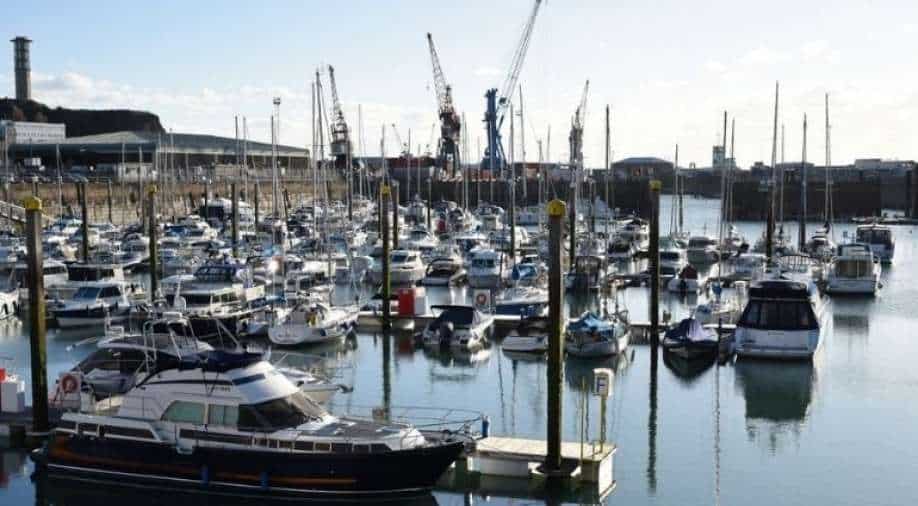 (FILES) In this file photo taken on November 08, 2017, motor yachts and sailing cruisers sits moored to pontoons in the harbour in St Helier, on the British island of Jersey. British Prime Minister Boris Johnson on May 6, 2021 sent two Navy patrol vessels to Jersey over concerns that French fishermen could blockade its main port in an escalating post-Brexit row. Photograph:( AFP )

Around 50 French fishing boats gathered to protest at the main port of the UK island of Jersey on Thursday amid fresh tensions between France and Britain over fishing.

The boats massed in front of the port of Saint Helier to draw attention to what they see as unfair restrictions on their ability to fish in UK waters after Brexit, an AFP photographer at the scene said.

It was unclear if they intended to blockade the port, or if they would allow other boats in and out.

"It's incredible to have succeeded in getting everyone together," fisherman Camille Lecureuil told AFP onboard his boat.

Lecureuil, from the port of Carteret on the French coast opposite Jersey, said a cargo ship was due to leave Saint Helier.

"Everyone seems to have decided to stop it from leaving. Fishing boats are moving into position at the entrance of the port," he said.

"It's a peaceful protest. There's no reason for it to degenerate."

France warned Tuesday that it was weighing its response after the UK imposed rules governing access for French fishing boats near the Channel Islands.

France's Maritime Minister Annick Girardin even suggested that France could cut electricity to the island as a last resort.