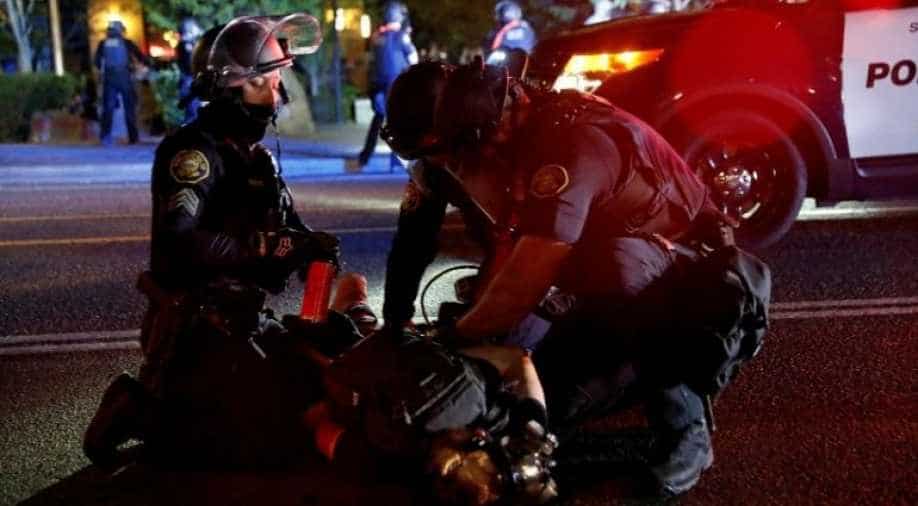 Protests flared in Portland overnight on Monday as demonstrators clashed with police on the streets of the Oregon city, which has become a focus of the U.S. presidential race after months of sometimes violent confrontations.

The latest protest came the night before President Donald Trump was due to visit Kenosha, Wisconsin, another flashpoint, having seized on civil disturbances in Portland and other cities to criticize Democratic leaders and call for "law and order" ahead of the Nov. 3 presidential election.

Democratic challenger Joe Biden on Monday said it was Trump himself who was helping stoke the violence.

In the latest Portland unrest, police used smoke grenades and pepper balls to control the crowd of protesters. Police said in a statement officers "deployed some crowd control munitions" and 19 people were arrested, mostly on charges of disorderly conduct and interfering with police.

About 200-300 people gathered in the downtown area to march to the apartment of Portland Mayor Ted Wheeler to demand his resignation. They were seen setting fire to wooden benches and plastic trash bins along the march.

Portland has seen nightly protests with hundreds of arrests since the killing of George Floyd, a 46-year-old Black man, in Minneapolis on May 25. Kenosha was thrust into the spotlight after police shot a Black man in the back on Aug. 23.

Police declared Monday night's gathering unlawful and later upgraded it to a riot after protesters set a fire in an unoccupied apartment building.

The area was secured to allow firefighters to respond to the situation, police said.

In recent weeks, tensions between right- and left-wing groups in the city have roiled downtown.

Trump supporters have converged on the city as counterdemonstrators, including one man who was fatally shot on Saturday night. Nobody has been charged in that case as police review poor-quality video of the incident.

State police and officers from neighboring suburbs were sent to Portland on Monday following the shooting.

The federal government had previously sent tactical officers into Portland but started withdrawing in late July after discussions with Oregon Governor Kate Brown, who said on Twitter that the federal officers "acted as an occupying force & brought violence."

"We are standing by to support Portland. At the same time, President Trump has made it abundantly clear that there will come a point when state and local officials fail to protect its citizens from violence, the federal government will have no choice but to protect our American citizens," Wolf said in a letter to Wheeler.

The Trump administration appeared to be responding to Wheeler's open letter to Trump on Friday in which he rejected the U.S. president's offer to redeploy federal agents in Portland.

"No thanks," Wheeler wrote. "We don't need your politics of division and demagoguery."