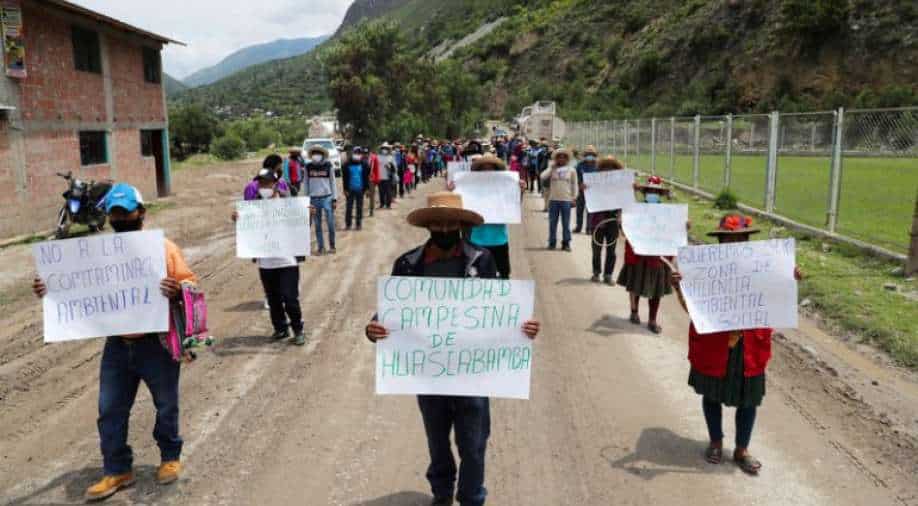 In a meeting on Thursday after the government's approval for the Las Bambas expansion was announced, the local Huancuire community said it would take all necessary "legal and social" measures to prevent the development of a second open pit copper mine called Chalcobamba

A Peruvian community has threatened to oppose the expansion of MMG Ltd's major Las Bambas copper mine, according to a document seen by Reuters, hinting at a new flashpoint for the project shortly after the state approved the increase in production.

Located in the Apurimac region of southern Peru, the Chinese-owned mine has been at the center of protests and road blockades since it started operations in 2016, which have caused it to frequently curtail its operations.

In a meeting on Thursday after the government's approval for the Las Bambas expansion was announced, the local Huancuire community said it would take all necessary "legal and social" measures to prevent the development of a second open pit copper mine called Chalcobamba.

"We are adamant in pointing out that we will not allow, or tolerate the start of operations in the unconsulted Chalcobamba project," the Huancuire community said in a document seen by Reuters and signed by local leaders on Thursday.

Peru's energy and mining ministry did not respond to a request for comment.

MMG, which controls Las Bambas, said it will complete work on Chalcobamba within five months to begin production in the second half of 2022.

The company expects the development of the project to increase its production to 400,000 tonnes of copper concentrate per year in the medium term, up from 380,000 tonnes.

Peru is the world's No. 2 copper producer after Chile and Las Bambas produces 2% of the world's supply of the red metal.

Huancuire's community leaders claims that the Ministry of Energy and Mines authorized the construction of Chalcobamba without having completed due diligence procedures with the community to start the project.

Most of those living near the mine are indigenous people of Quechua descent and have repeatedly accused the Chinese company of failing to provide enough jobs and money to the region, one of the poorest in Peru, despite the vast mineral wealth.

Later on Friday, the federal government said in a statement it would send more national police troops to the region, an effort it says will free up the movement of vehicles and people and avoid disruption to regional economic activity. The move is a shift in strategy by the government of leftist President Pedro Castillo, who was attempting to avoid police confrontation with communities in the area.

"The Ministry of the Interior maintains a dissuasive police presence, guaranteeing the normal development of activities, both for communities and for companies in the public and private sectors," it said.