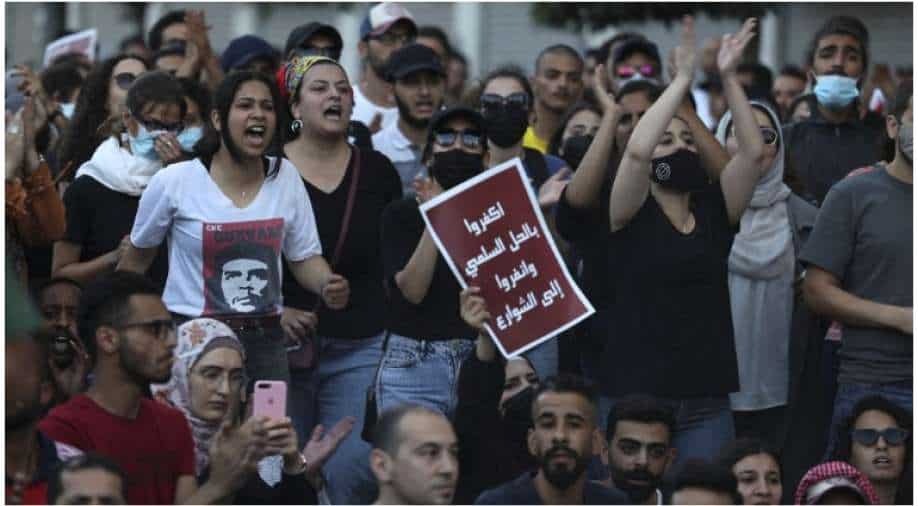 Palestinian demonstrators lift placards during a rally in Ramallah city in the occupied West Bank on July 3, 2021, denouncing the Palestinian Authority (PA) in the aftermath of the death of activist Nizar Banat while in the custody of PA security forces Photograph:( AFP )

Relatives of Nizar Banat, who died after security forces stormed his home and violently arrested him, were at the forefront of the protest

Hundreds of Palestinians on Saturday protested against President Mahmud Abbas and demanded his resignation. The protest took place in West Bank. The protests were sparked by last month's death of activist. The activist died in custody.

Relatives of Nizar Banat, who died after security forces stormed his home and violently arrested him, were at the forefront of the protest in Ramallah where Abbas's Palestinian Authority (PA) is based.

Mother of Banat held up a portrait of her son.

Demonstrators also carried pictures of Banat, a vocal critic of alleged corruption within the PA, while others held up a huge banner that carried the words "Abbas Leave", an AFP reporter said.

"This rally is a message of allegiance to Nizar Banat and to the authorities, who must bring to justice those responsible for his death," Hassan Khreishah, a former head of the Palestinian Legislative Council, told AFP.
Palestinian police and security forces blocked the road leading to Abbas's headquarters in Ramallah.

A counter-protest organised by Abbas's Fatah faction was meanwhile held in the city of Hebron to express support for the Palestinian leader.

The 43-year-old had registered as a candidate in Palestinian parliamentary elections that were set for May, until Abbas postponed them indefinitely.

According to an autopsy, he had been beaten on the head, chest, neck, legs and hands, with less than an hour elapsing between his arrest and his death.