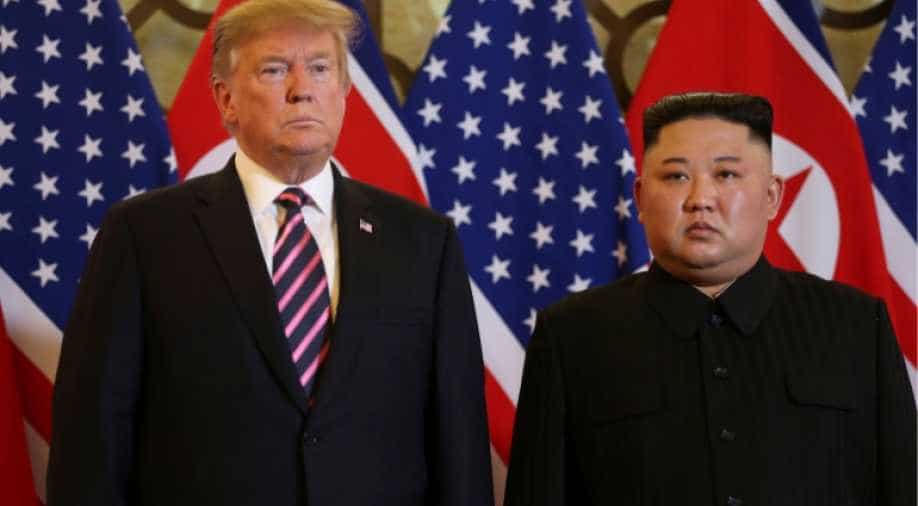 After weeks of building expectations and with a signing ceremony ready to go, President Donald Trump abruptly ended his second-ever meeting with North Korean leader Kim Jong-un and declared a deadlock.

The United States and North Korea on Friday put forward starkly different accounts over the breakdown of a high-stakes summit in Hanoi but offered guarded hope that they could meet again.

After weeks of building expectations and with a signing ceremony ready to go, President Donald Trump abruptly ended his second-ever meeting with North Korean leader Kim Jong-un and declared a deadlock.

"Sometimes you have to walk and this was just one of those times," an unusually downbeat Trump told reporters.

"Basically they wanted the sanctions lifted in their entirety and we couldn't do that," Trump said before flying back to Washington.

In an exceptionally rare meeting with reporters, North Korean Foreign Minister Ri Yong Ho summoned the press in Hanoi at midnight and denied the White House account that Pyongyang was only seeking a complete deal.

North Korea had offered to "permanently and completely dismantle all the nuclear production facilities" at its main complex in Yongbyon if the US dropped sanctions "that hamper the civilian economy and the livelihood of our people", Ri said.

He warned that the North's stance was "invariable" and that its offer will "never change".

But North Korean state media -- which less than two years ago was branding Trump a "mentally deranged US dotard" -- offered a more conciliatory take, saying the summit had been "productive".

Kim and Trump "agreed to continue having productive talks to discuss the denuclearisation of the Korean peninsula and the improvement of US-North Korea relations", the Korean Central News Agency said.

The North Koreans appeared to be thinking through their response to the often unpredictable Trump, who insisted that he could obtain a better deal.

"I'd much rather do it right than do it fast," Trump told reporters, reaffirming his "close relationship" with Kim.

"There's a warmth that we have and I hope that stays, I think it will."

'It will take a little while'

The outcome in Hanoi fell far short of hopes that the meeting would build on the leaders' summit in Singapore in June, which marked a historic first but resulted only in a vague commitment to "work toward complete denuclearisation of the Korean peninsula".

Progress subsequently stalled, with the two sides disagreeing on what that means.

The US president has since frequently dangled the prospect of a brighter economic future for a nuclear-free North Korea, at one point tweeting there was "AWESOME" potential.

But it was not enough.

US Secretary of State Mike Pompeo, who accompanied Trump, said both sides "need to regroup" before agreeing to another meeting, adding: "My sense is it will take a little while."

Pompeo however also said "there's still a basis for believing that we can move forward".

Beyond the sub-par summit result, Trump came under fire at home for saying that Kim "didn't know" about the torture of an American college student jailed in the North.

Otto Warmbier, who was arrested for allegedly taking down a poster, returned home in 2017 in a coma and died soon afterward, with a US judge ruling that the 22-year-old had died from torture.

House Speaker Nancy Pelosi said she thought there was "something wrong" with a US president choosing to believe "thugs" such as Kim and Russian President Vladimir Putin over the US intelligence community.

With a table already prepared for a working lunch and signing ceremony, Trump moved up his final news conference by two hours as he and Kim left without any accord.

"This is a major failure," tweeted Joe Cirincione, president of the Ploughshares Fund peace foundation, saying it showed the limits of top-level summitry with "not enough time or staff" to work out a deal.

Trump flew around the world for the meeting and Kim undertook a mammoth two-and-a-half-day trek through China in his olive green train, travelling 4,000 kilometres (2,500 miles).

Trump headed home, and Kim will stay on in Hanoi for a state visit.

The US leader placed calls from Air Force One to the leaders of US allies Japan and South Korea to discuss the summit, Sanders said.

Seoul said that Trump "expressed regret" to President Moon Jae-in, who helped arrange the summits, over not striking a deal with Kim.

In China, North Korea's primary ally, foreign ministry spokesman Lu Kang voiced understanding, saying that "solving this problem is definitely not something that can be achieved overnight"

As in Singapore, the two men put on a show of bonhomie in Vietnam -- a far cry from 2017, when Trump was mocking Kim as "rocket man" and threatening to "totally destroy" North Korea over its nuclear and missile tests.

The two leaders, nearly 40 years apart in age, appeared to share jokes in front of reporters and indulged in a poolside stroll Thursday around the gardens of the luxury Metropole Hotel.

Before the summit, there was talk that there could be a political declaration ending the 1950-53 Korean War, which finished technically with an armistice rather than a peace treaty.

Trump's failure to clinch a deal paradoxically brought him praise within his Republican Party -- some members had privately fretted that he was too eager to seal a historic accord.

Senate Majority Leader Mitch McConnell said that Trump "should be commended for his personal commitment to persuading Kim Jong Un to pursue a different path -- and for walking away when it became clear North Korea was not ready to commit enough to denuclearisation."