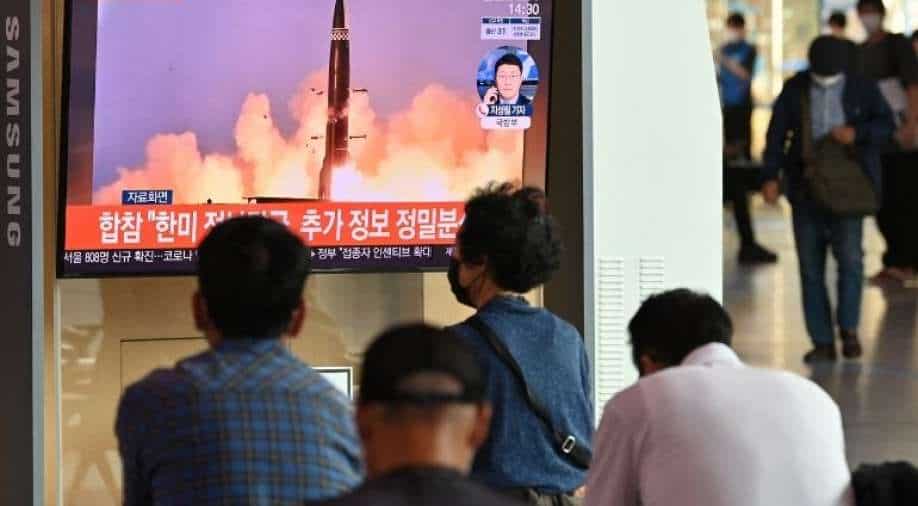 People watch a television news broadcast showing file footage of a North Korean missile test, at a railway station in Seoul on September 15, 2021, after North Korea fired two ballistic missiles into the sea according to the South's military. Photograph:( AFP )

The state media showed what appeared to be two different missiles streaking up from rail-car launchers engulfed in orange flames along tracks, which were surrounded by dense forest

North Korea recently said that it successfully launched ballistic missiles from a train for the first time and was continuing to bolster its defences, after the two Koreas test-fired missiles.

As per Pyongyang’s official Korean Central News Agency, the missiles were launched during a drill of a “railway-borne missile regiment”. This transported the weapons system along rail tracks in the country’s mountainous central region and accurately struck a sea target 800km away.

The state media showed what appeared to be two different missiles streaking up from rail-car launchers engulfed in orange flames along tracks, which were surrounded by dense forest.

Eventually, it may also involve submarines.

Firing a missile from a train could add mobility. However, as per few experts, North Korea’s simple rail networks running through its relatively small territory would be quickly destroyed by enemies during a crisis.

Col Kim Jun-rak, a spokesman for South Korea’s joint chiefs of staff, was quoted by the Guardian as saying, "Our military assesses that North Korea is continuously developing various mobile launch equipment".

He further added that the South Korean and US militaries were continuing to examine the North’s launches.

The presidential office said in a statement that President Moon Jae-In supervised the test of a domestically-built submarine-launched ballistic missile on Wednesday afternoon.

It claimed that a missile fired from a submarine of the 3,000-tonne class flew a certain distance before hitting a predetermined target.