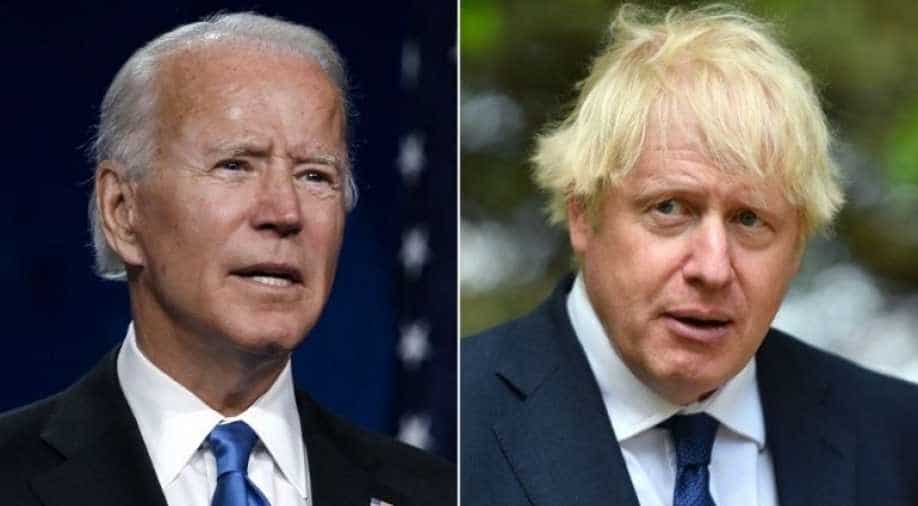 Johnson unveiled legislation that would break parts of the Brexit divorce treaty relating to Northern Ireland, blaming the EU for putting a revolver on the table in trade talks and trying to divide up the United Kingdom.

US Democratic presidential candidate Joe Biden warned the United Kingdom that it must honour the Northern Irish peace deal as it extracts itself from the European Union or there would be no US trade deal.

We can’t allow the Good Friday Agreement that brought peace to Northern Ireland to become a casualty of Brexit.

Any trade deal between the U.S. and U.K. must be contingent upon respect for the Agreement and preventing the return of a hard border. Period. https://t.co/Ecu9jPrcHL

Prime Minister Boris Johnson's move to break parts of the EU divorce deal relating to Northern Ireland has triggered fears it could undermine the 1998 Good Friday peace accord that ended decades of violence between Irish nationalists and British unionists.

The Good Friday Agreement refers to a pair of deals signed on April 1998 that ended most of the violence of the Troubles, a political conflict in Northern Ireland that had been ongoing since the 1960s.

Johnson says the United Kingdom has to have the ability to break parts of the 2020 Brexit treaty he signed to uphold London's commitments under the 1998 peace deal which ended three decades of sectarian violence in Northern Ireland between pro-British Protestant unionists and Irish Catholic nationalists.

The EU says any breach of the Brexit treaty could sink trade talks, propel the United Kingdom towards a messy exit when it finally leaves informal membership at the end of the year and thus complicate the border between Northern Ireland and EU-member Ireland.

Britain and the EU jointly promised in the Brexit agreement to ensure there are no customs posts or other obstacles on the Northern Ireland-Ireland border. The open border is key to the stability that underpins the peace settlement.

British Foreign Secretary Dominic Raab is in Washington this week, and has been trying to assuage American concerns that a pending government bill would undermine Northern Ireland peace, if passed by lawmakers.

The EU's Brexit negotiator told the bloc's 27 national envoys that he still hoped a trade deal with Britain was possible, stressing that the coming days would be decisive.

Michel Barnier addressed the gathering on Wednesday and the three sources either participated in the discussion behind closed doors or were briefed on its content.

"Barnier still believes a deal is possible though the next days are key," said one of the EU diplomatic sources.

Johnson told The Sun that the EU was being "abusive" to Britain and risking four decades of partnership.

He said the UK must "ring-fence" the Brexit deal "to put in watertight bulkheads that will stop friends and partners making abusive or extreme interpretations of the provisions."

Societe Generale analysts said on Thursday they now see an 80 per cent chance that Britain and the EU will fail to strike a trade deal before the end of the year.

Biden, who has talked about the importance of his Irish heritage, retweeted a letter from Eliot Engel, chair of the Foreign Affairs Committee of the US House of Representatives, to Johnson calling on the British leader to honour the 1998 Good Friday peace deal.

Engel urged Johnson to "abandon any and all legally questionable and unfair efforts to flout the Northern Ireland protocol of the Withdrawal Agreement."

He called on Johnson to "ensure that Brexit negotiations do not undermine the decades of progress to bring peace to Northern Ireland and future options for the bilateral relationship between our two countries."

Engel said Congress would not support a free trade agreement between the United States and the United Kingdom if Britain failed to uphold its commitments with Northern Ireland.

The letter was signed by Representatives Richard Neal, William Keating and Peter King.

Johnson is pushing ahead with his plan.

His government reached a deal on Wednesday to avert a rebellion in his own party, giving parliament a say over the use of post-Brexit powers within its proposed Internal Market Bill that breaks international law.