No country for a Rohingya 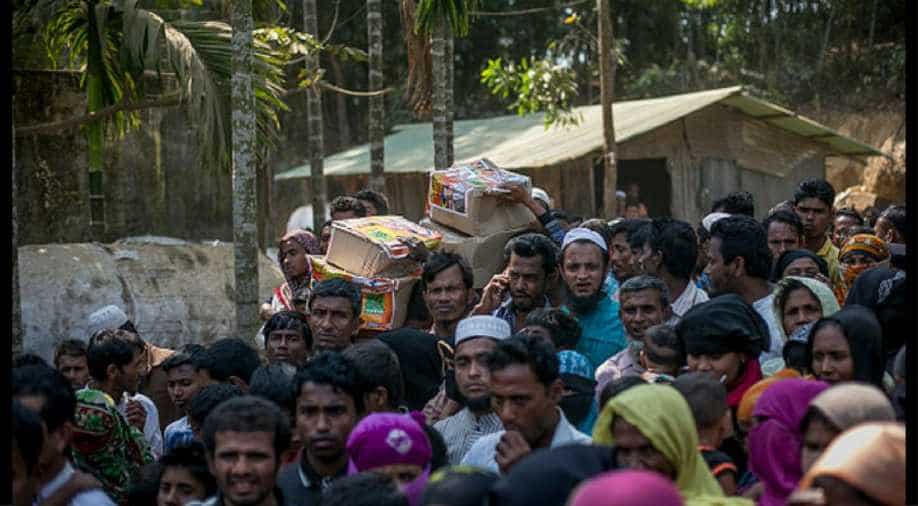 Rohingya community has hope only from ASEAN countries and the countries like Bangladesh, Turkey, Saudi Arabia for the way out. Photograph:( Zee News Network )

Invoking history in the everyday politics of a post-colonial state is an insane thing to do. On almost every occasion it is done, the objective is to create or expand fissures among communities for mean gains. Manipulators interpret history partially or irrationally. It’s an absurd thing to live in the past, ignoring the realities and the established universal values of today. Unfortunately, all these negatives are being manifested in present day’s Myanmar and especially in its western Rakhine State, which is also known as Arakan, in the form of an utterly irrational citizenship rule created by 1960s military dictator.

The Myanmar citizenship rule is in complete contrast with all international norms and conventions of the citizenship. And this citizenship rule makes an unprecedented cut off line that needs to date back to the 19th century as the criterion for citizenship, turning most Rohingya ethnic people of Rakhine State illegal immigrant.

The Myanmar citizenship rule is in complete contrast with all international norms and conventions of the citizenship.

Now, Rohingyas are fleeing Arakan again like the seventies. Already about half of their close to 3 million population are refugees in Bangladesh, Saudi Arabia, Pakistan, Thailand, Malaysia, India and Indonesia from the past exodus. The poor civilians of this highly persecuted and discriminated community are again on the run following the crack down on them by the Myanmar army. Accused of indulging in acts of political militancy by some elements of this desperate community, the usual Myanmar over reaction is brutal and cruel.

However, to understand the context of the crisis, it is imperative to revisit a bit of history and geography. Arakan rather has more geographical contiguity with Chittagong of Bangladesh in the north than the Bamar (the dominant ethnic group in Myanmar who constitute about 66 per cent of the country’s population) hinterland in southern and central Myanmar. Rakhine State is a coastal province, elongated like a tail from north to south. The state is separated from rest of Myanmar by Arakan Mountains located on the east of the state. The mountains also run parallel from north to south to the coastal plains of the state.

There are two major ethnic groups living in Arakan. One is the Rakhine, after whom the state is named, and the other is the Rohingya. The Rakhine are culturally and linguistically close to the Bamar and Rohingya to the Bengali. Racially also, these two ethnicities are different. Rakhines are Mongoloid, Rohingyas are Caucasoid – Austro Asiatic mixed like most people of the eastern part of Indian sub- continent.

Separatist armed movements were waged by the Rohingyas in northern Arakan in the 1950s and 1960s which Burmese army quelled with brute force.

Historically, both the people lived and moved freely around this Chittagong-Arakan coastal plains and adjacent hills. There are about 200000 Rakhines too in the Chittagong Hill District of Bandarban and some in the southern Bangladeshi district of Patuakhali. Rakhines are also known as Mogh or Marma in Bangladesh. For the most part of the history, there were independent Mogh/ Rakhine kingdoms in Arakan which sometimes expanded up to Chittagong. There were early Bengali/ Rohingya courtiers and royal poets in Arakan courts. In the 18th century, forces of Bamar kingdoms crossed Arakan mountains, invaded and annexed Arakan. But it didn’t last long as within a few decades the British gained Arakan and later the entire Burma and kept Arakan annexed to its Burmese dominion.

During British period there was a wave of Bengalis moving into Arakan for work, and under British patronage, they merged with old Rohingyas. In the World War II, the Rohingyas sided with the British whereas the Rakhines generally sided with the Japanese. Around the time of independence of Burma, there were communal tensions and riots between Rohingyas and Rakhines. Rohingyas wanted the Muslim majority of northern Arakan which had the border with Chittagong to merge with East Pakistan. Separatist armed movements were waged by the Rohingyas in northern Arakan in the 1950s and 1960s which Burmese army quelled with brute force. The same happened in the 1970s which met the same fate. The armed movement found resurgence since the 1990s and some elements are still continuing that.

Interestingly, there were separatist movements from the Rakhine side also against the Burmese. At least two groups operated in the 1960s and 1970s and some remnants still exist although at the marginal level. Burma or the present Myanmar is ethnically quite diverse a country. There are several dozens of ethnic groups other than the dominant Bamars. Some of these ethnicities are sizable and they form a majority in their own areas e.g. Kachin, Karen Shan etc. A long military rule, hegemony of the Bamar community and lack of channels for political expressions have led to the number of armed separatist movements in Myanmar many of which still persists.

A long military rule, hegemony of the Bamar community and lack of channels for political expressions have led to the number of armed separatist movements in Myanmar.

For the most part of its post-colonial history, Myanmar leadership has been self-secluded, secretive and regressive. Like the Pakistani army, Myanmar army captured the polity of the country right after its independence and continued to be at the helm till date. They haven’t allowed much modern liberals thoughts of rights, democracy or institutions to enter their domain of imposed nominal socialism. Inside, they kept the Burmese society orthodox, stagnant and economically under developed.

The Buddhist monks of Myanmar, like their Sri Lankan counter parts, espouse a kind of religious nationalism. They are quite aggressive and violence-inciting and receives patronage from Myanmar army and political forces. It’s a huge irony in light of fundamental non-violent tenets of Buddhism. The difference between Myanmar and other nations of south Asia is quite stark. Myanmar expelled its sizable Indian population right after its independence. It also had anti-Muslim turned anti-South Asian riots in the central part of it in recent past.

Aung San Suu Kyi, after decades of struggle, has only attained a limited political power. And despite the criticism of her in the Rohingya episode for remaining silent, it has to be understood that Suu Kyi's hands are actually tied. The Myanmar army has clearly taken the side of the Rakhine, who are ethnically and communally close to the Bamars, and they won’t allow Suu Kyi much leeway in this. However, Suu Khi should at least have taken a middle stand and put some indirect pressure on the military. Then the international community could have done more.

The Rohingyas are politically quite disorganised and the high degree of persecution has suppressed their natural political expressions. Due to this oppression, some Islamist militants have found their way into this community. And that, in turn, has become more of a reason for the Myanmar army to conduct heavy handed crack down at the cost of high civilian causality.

Despite the criticism of her in the Rohingya episode for remaining silent, it has to be understood that Suu Kyi's hands are actually tied.

Geopolitically, it seems no country is interested to do much for the Rohingyas as yet. Bangladesh doesn't have enough strength to do much on its own- be it diplomatic or military. Bangladesh has close relations with China, but China has even closer relations with Myanmar. Despite the overt bonhomie with Hasina government, the BJP government in India has hardly any empathy towards Muslim sufferings anywhere in the world. Nehruvian principle based foreign policy is a thing of past for India.

The foreign policy is now narrow nationalistic interest based and the current Indian government will easily sacrifice Rohingyas for a little strategic leverage with Myanmar. The Indian government has already declared that it will deport the 40 thousand Rohingyas from neighbouring Myanmar, about 0.33 or one-thirtieths of the entire Rohingya refugee and that too against its own home ministry policy of giving shelter to persecuted communities and defying UNHCR measures.

Apart from Bangladesh, Saudi Arabia and Pakistan have taken in sizable numbers of Rohingya refugees and Turkey is quite vocal against Myanmar atrocities against Rohingyas. But the Islamic world itself is in chaos and Islamic solidarity is in decline. Trump’s US is no more reliable for anything good and many will probably count only on the EU and UK in the west on this matter. UN has been the lone consistent international voice for these distressed people. ASEAN countries certainly have some influence on Myanmar although not as much as China.

Bengalis are culturally close to the Rohingyas, and there is internal pressure on Bangladesh government to do something, but the government as of now has been careful not to antagonise Myanmar despite the atrocities and tried to solve the matter bilaterally with very limited success.

Bangladesh is in a difficult dilemma at this point. Bengalis are culturally close to the Rohingyas, and there is internal pressure on Bangladesh government to do something, but the government as of now has been careful not to antagonise Myanmar despite the atrocities and tried to solve the matter bilaterally with very limited success. It seems now that only a Bangladesh, Turkey, Saudi Arabia led diplomatic drive including measures like sanctions on Myanmar, if necessary, and with help from ASEAN countries like Thailand, Malaysia and Indonesia and perhaps the EU and UN is the only way forward. Bangladesh has to be careful while taking the help of the Islamic world in not giving in to any demand of Islamic radicals to operate in Arakan from its soil. That can have serious ramifications for Bangladesh, Arakan and even the entire sub-region.

But the big question is to what extent these countries will be ready to coordinate with each other and invest in this crisis? Can China be pressurised substantially to put pressure on Myanmar in turn? As of now, it appears that there isn’t much hope for the destitute and internationally abandoned Rohingyas - the most persecuted community in the world as declared by the UN. Humanity continues to be humiliated in that wretched land.