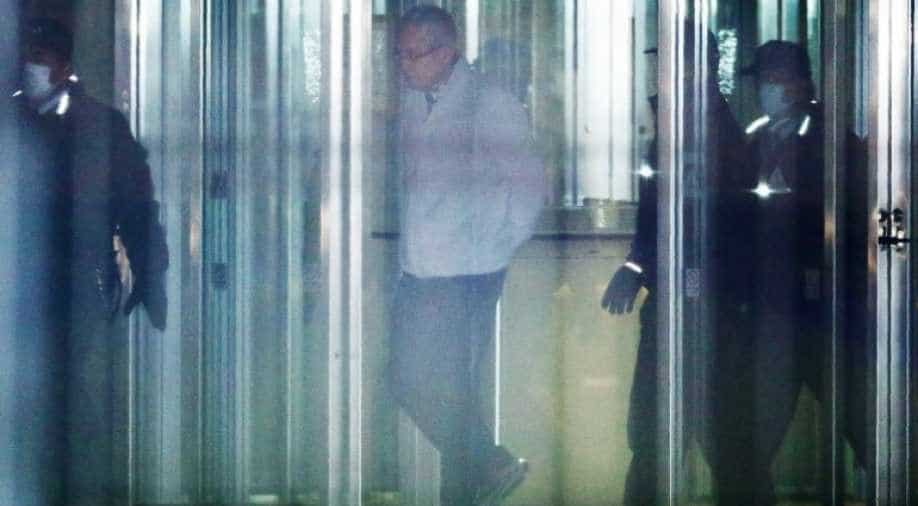 In a statement prepared before his release, Kelly said he was arrested 'for unexpected suspicion, during which I had hard times for my disease in this detention facility.'

Greg Kelly, wearing a casual zip-up jacket and looking tired, walked out of the Tokyo Detention Centre more than a month after his arrest and got into a waiting taxi without speaking to the media.

In a statement prepared before his release, Kelly said he was arrested "for unexpected suspicion, during which I had hard times for my disease in this detention facility."

He said he would now consult a doctor regarding a health problem.

"I expect that the trial will start soon. I have not been involved in alleged false entry. I believe my innocence will be revealed in the trial," he said in the statement, according to Kyodo News.

"I would like to have a judgement of non-guilty and restore my impaired reputation, and then return to my family as soon as possible," he said.

His release came after the Tokyo District Court had approved a request by his lawyers.

Prosecutors appealed the decision, but the court turned them down.

Kelly was granted bail reportedly on condition that he would not leave Japan, make contact with anyone involved in the case, or destroy evidence.

He would also need court approval to attend board meetings at Nissan, public broadcaster NHK said.

The 62-year-old American was arrested on November 19 at the same time as Ghosn on allegations he helped him under-report his compensation at Nissan for years.

The bail order comes after Kelly's wife issued a video statement saying she was "extremely concerned about his health."

Kelly suffers from a spinal condition and was reportedly due to undergo surgery before his arrest in Tokyo.

"Greg was tricked into coming to Japan and betrayed by a group of Nissan executives as part of a political power grab. Their dishonourable motives are clear," Dee Kelly claimed.

She said her husband, once Ghosn's right-hand man, had been "caught up in an international plot by some at Nissan to take control".

Kelly is accused of helping construct an alleged scheme by which Ghosn under-reported his salary for a period of eight years.

The pair has already been indicted over their alleged involvement in the scheme in the five years to 2015. Prosecutors are still investigating the period from 2015.

Ghosn also faces an additional allegation involving claims he shifted a personal investment loss of more than $16 million to Nissan's books with help from a Saudi acquaintance.

He is expected to remain in detention through Christmas and the start of 2019, with prosecutors able to apply for an additional 10-day extension when his current detention period expires on January 1.

Ghosn's fall from power at Nissan has exposed a deep rift in the firm's three-way alliance with Renault and Mitsubishi Motors -- which outsold all of its rival groups last year.

While Nissan and Mitsubishi quickly removed Ghosn from his leadership roles after his arrest, Renault has been more cautious about the charges and the case has stoked tensions between the French firm and Nissan.

Ghosn was once revered in Japan for his role in turning around Nissan and forging the fractious alliance, in which Renault remains the dominant shareholder.

But his former protege, current Nissan CEO Hiroto Saikawa, has harshly criticised the Franco-Brazilian-Lebanese tycoon, accusing him of having accrued too much power and referring to the "dark side" of Ghosn's tenure.

Ghosn, who denies the allegations against him, is being held at the detention centre's infirmary and has a bed and heating, according to a source with knowledge of his condition.