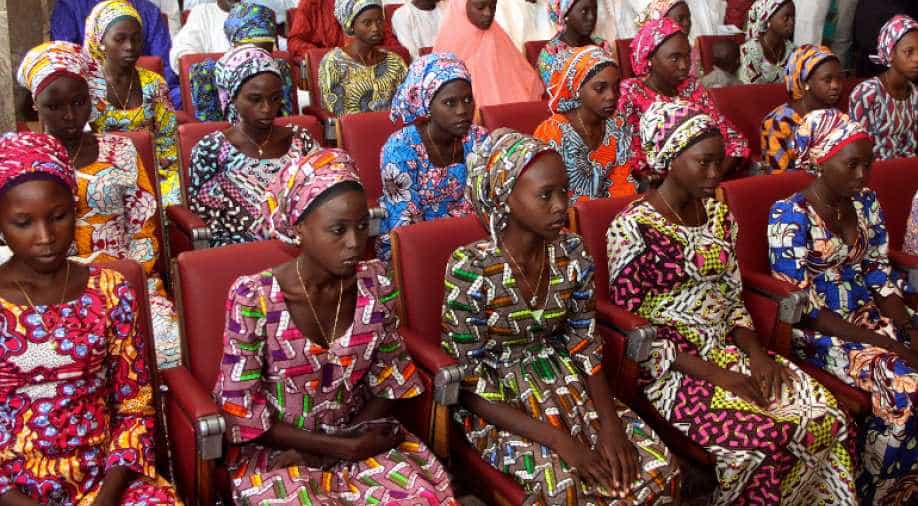 This file photo taken on October 19, 2016 shows 21 Chibok girls who were released by Boko Haram a week before, attending a meeting with the Nigerian President at the State House in Abuja, Nigeria. Photograph:( AFP )

Nigeria on Saturday said 82 schoolgirls who were among more than 200 kidnapped by Boko Haram Islamists more than three years ago were released as part of a prisoner swap.

"Today 82 more Chibok girls were released... in exchange for some Boko Haram suspects held by the authorities," the presidency said on Twitter, adding the students were expected in Abuja on Sunday.

Boko Haram fighters stormed the Government Girls Secondary School in the remote town of Chibok on the evening of April 14, 2014 and kidnapped 276 girls.

Fifty-seven managed to escape in the hours that followed but the remaining 219 were held by the group.

Boko Haram leader Abubakar Shekau claimed in a video message that they had converted to Islam.

The audacious kidnapping brought the insurgency to world attention, triggering global outrage that galvanised support from the former US first lady Michelle Obama and Hollywood stars.

Twenty-one girls were released in October last year after negotiations between Boko Haram and the Nigerian government brokered by the International Committee of the Red Cross (ICRC) and the Swiss government.

Three others were also found.

At the time of the release of the 21, President Muhammadu Buhari's spokesman Garba Shehu said the government was hoping to secure the release of 83 others being held by a different Boko Haram faction.

Last month he said in a radio interview that there were ongoing negotiations involving "some foreign entities" to release the 195 girls believed still held.

He told BBC Hausa the ICRC and Swiss government "have not withdrawn their support in the negotiations".

Other countries were also involved, he added, without elaborating.

Following is a timeline of events since the Boko Haram jihadist group abducted more than 200 schoolgirls in the remote town of Chibok in northeastern Nigeria in 2014.

The girls are forced from their dormitories onto trucks and driven into the bush. Fifty-seven girls manage to flee.

Boko Haram leader Abubakar Shekau claims responsibility in a video released on May 5, and vows to sell the girls as slave brides.

A week later, a second video shows about 100 of the missing girls. Boko Haram says they have converted to Islam and will not be released unless militant fighters held in custody are freed.

On May 17, Benin, Cameroon, Chad, Niger and Nigeria vow to fight Boko Haram together, in what Cameroon President Paul Biya terms a "declaration of war".

The UN Security Council says the kidnappings "may amount to crimes against humanity", as Britain, China, France, Israel and the US offer help.

On May 26, Nigeria's Chief of Defence Staff Alex Badeh says the girls have been located but warns a rescue operation would put their lives at risk.

On April 14, 2015, Nigeria's president-elect Muhammadu Buhari warns he "cannot promise that we can find" the girls, as vigils are held in many countries to mark their first year in captivity.

Amnesty International says the girls may have been separated into three or four groups and are being held in camps, some of which might be in Cameroon or Chad.

Buhari says in late December he is willing to negotiate with any "credible" Boko Haram leadership, a week after claiming the country has "technically" won the war against Boko Haram.

Throughout 2015, the Nigerian military announces the rescue of hundreds of people, most of them women and children, who have been kidnapped by Boko Haram.

But the missing schoolgirls are not among them, despite several unconfirmed sightings.

Suicide attacks using women and young girls increase against "soft" civilian targets such as mosques, markets and bus stations, fuelling fears that Boko Haram might be using its captives as human bombs.

In March 2016, it emerges that Boko Haram also seized 500 women and children from the north east town of Damasak in Borno state just months after the Chibok abduction. The kidnapping was denied at the time.

On the eve of the abduction's second anniversary, US news channel CNN reports that Boko Haram has sent a "proof of life" video which shows 15 of the girls -- the first concrete indication that at least some are still alive.

On May 18, 2016 the Nigerian army confirms the first of the schoolgirls has been found.

The 19-year-old, who later meets President Buhari, was discovered with a four-month-old baby and a man she described as her husband near Boko Haram's Sambisa Forest enclave.

On October 13, 2016, Nigerian officials announce the release of 21 of the girls following talks between the government and Boko Haram brokered by Switzerland and the International Red Cross.

Local sources say four jihadist prisoners were freed as part of the deal to secure the girls' release.

The Nigerian government raises the prospect that more releases could follow, with a senior official in the president's office saying that "the negotiations will continue".

At least 80 more girls have been released, security sources, a senior minister and Enoch Mark, the father of two of the girls, tell AFP on Saturday.