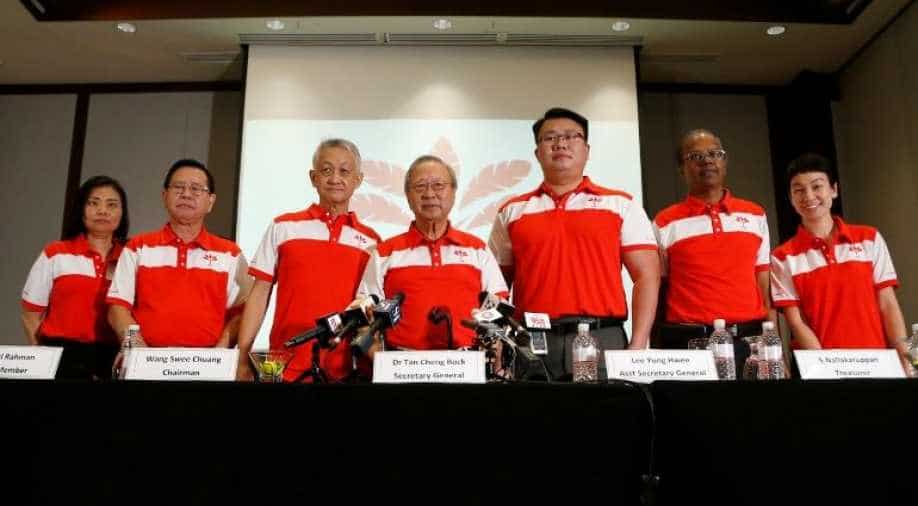 Members of the newly launched Progress Singapore Party (PSP) pose for a group photo after a press conference. Photograph:( Reuters )

A new opposition party backed by the estranged brother of Singapore's prime minister was launched Saturday in a fresh challenge to the government as speculation mounts elections could be called soon.

A new opposition party backed by the estranged brother of Singapore's prime minister was launched Saturday in a fresh challenge to the government as speculation mounts elections could be called soon.

The Progress Singapore Party (PSP) aiming to contest an election due by 2021 but widely expected earlier is led by Tan Cheng Bock, a medical doctor and former government stalwart who once ran for president and nearly defeated the establishment candidate.

The group has received the support of Prime Minister Lee Hsien Loong's brother, the latest sign of a bitter falling out within the city state's first family over their father's legacy.

Under his People's Action Party (PAP), Singapore transformed from a gritty port into one of Asia's most advanced economies although authorities also faced criticism for curtailing civil liberties and free speech.

Speaking to hundreds of supporters at a hotel ballroom and live on social media, the 79 year old Tan decried what he said was a climate of fear preventing people from speaking up.

He also claimed there was an "erosion of trust" between the government and citizens due to lack of transparency, independence, and accountability.

Beneath Singapore's gleaming skyscrapers "is an underlying tale of disquiet," he said, adding, "we cannot allow this current style of managing the country to go unchallenged".

The group joins a handful of other parties seeking to take on the dominant PAP, but the fractious opposition which has just six out of 89 elected seats in parliament is not viewed as a serious threat.

However, backing from the premier's sibling, Lee Hsien Yang could provide a boost to Tan.

In January, a 62 year old business executive Lee, who did not attend the PSP launch, said in a Facebook post that Tan was "the leader Singapore deserves".

In a separate post, he wrote PAP had lost its way and was no longer the party of his father.

During a press conference last week, Tan said he may be willing to take Lee into the party formally.

Lee's association with the party can boost Tan's profile as "one of the 'nice' people to have represented the PAP during its glory days," said Michael Barr, a Singapore politics specialist at Flinders University in Australia.

"The presence of the prime minister's brother in, or at least on the fringes of an opposition party, is a reminder that Prime Minister Lee Hsien Loong is not his father... and that this family is fractured over Lee Kuan Yew's legacy," Barr told AFP.

A Lee Hsien Yang candidacy under the PSP would be a "game changer" as it would "do immense damage to the brand of Lee Hsien Loong's branch of the family".

However, Singapore Management University law lecturer Eugene Tan said Lee Hsien Yang's support for the party is a "double-edged sword" as it could overshadow the PSP's agenda and focus attention on the family feud.

"The vision that Dr. Tan may have will become a sideshow. So it is a card that needs to be played very, very carefully," political analyst Tan told AFP.

The Lee family row centers on allegations made by the premier's siblings that he is seeking to block the demolition of a family bungalow to capitalize on their father's legacy something he has denied.