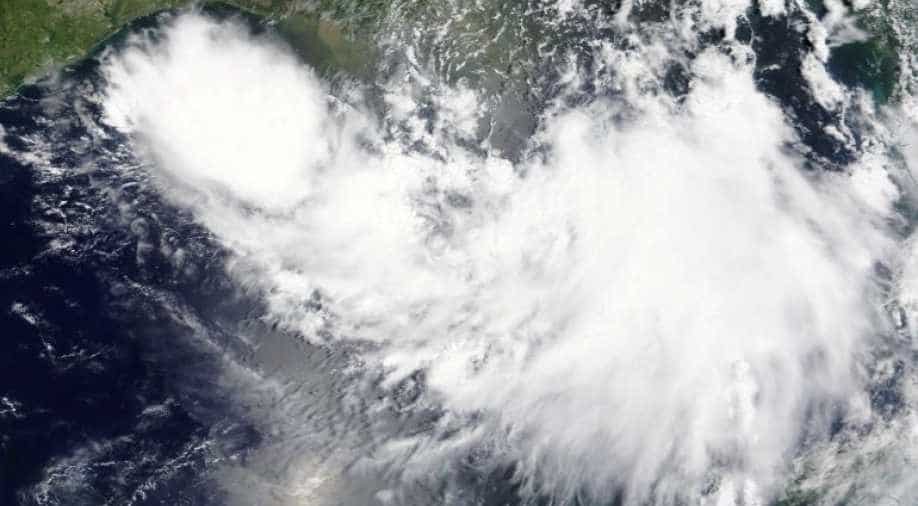 Tropical Storm Barry is shown in the Gulf of Mexico approaching the coast of Louisiana, US. Photograph:( Reuters )

U.S. President Donald Trump declared a state of emergency for the state of Louisiana late on Thursday ahead of tropical Storm Barry.

New Orleans braced for severe flooding with residents told to hunker down as a growing tropical storm in the US-Gulf of Mexico headed for landfall late on Friday or early on Saturday as the first Atlantic hurricane of 2019.

US President Donald Trump declared a state of emergency for the state of Louisiana late on Thursday, hours after the region's oil production was cut by half as energy companies evacuated offshore drilling facilities and a coastal refinery.

Authorities were keeping a watchful eye on the levee system built to contain flooding along the lower Mississippi River, which winds through the heart of New Orleans and has been running above flood stage for the past six months.

Barry was forecast to bring a coastal storm surge into the mouth of the river that could push its crest to 19 feet (5.9 m) on Saturday - a foot lower than initially predicted but still the highest level since 1950 and dangerously close to the top of the city's levees.

Meteorologists predicted between 10 and 20 inches (25-50 cm) of rain along much of the Gulf Coast on Friday and Saturday.

The brunt of the storm was expected to skirt the western edge of New Orleans instead of making a direct hit. New Orleans Mayor LaToya Cantrell said that the city had not ordered any voluntary or mandatory evacuations, but added that 48 hours of heavy downpours could overwhelm pumps designed to purge streets and storm drains of excess water in the low-lying city.

Pumps were already working at capacity after heavy rains flooded streets on Wednesday, she said.

Louisiana Governor John Bel Edwards warned: "The more information we get, the more concerned we are that this is going to be an extreme rain event."

Officials for the US Army Corps of Engineers, which maintains the levees, insisted no significant breaching of the 20-foot-tall levees in New Orleans was likely.

Some residents, recalling the deadly, devastating floods unleashed in 2005 by Hurricane Katrina, said they were determined to get out of harm's way.

"It's really the river that has us worried," said Betsey Hazard, who lives with her husband, Jack, and their two young children a block from the Mississippi River. She said the family was packing up and heading for the neighboring state of Mississippi to ride out the storm.

"They say that the river won't flood in New Orleans, but we have a 5-year-old and a 10-month-old, and we don't want to take any chances."

Others flocked to supermarkets for bottled water, ice, snack foods and beer, thronging grocery outlets in such numbers that some stores ran out of shopping carts.

Throughout the city, motorists left cars parked on the raised median strips of roadways in hopes the extra elevation would protect them from flood damage.

A tropical storm warning was posted on Thursday afternoon for metropolitan New Orleans, and a hurricane warning for a stretch of the Louisiana coast south of the city.

Mandatory evacuation orders were issued for areas of Plaquemines Parish beyond the levees southeast of the city, and for low-lying communities in Jefferson Parish, to the southwest.

Barry will be classified a hurricane once sustained winds hit 74 mph (119 km), which could occur late on Friday or early on Saturday when its center is expected to be near the Louisiana shoreline, the National Weather Service said. Weakening is expected after Barry moves inland.