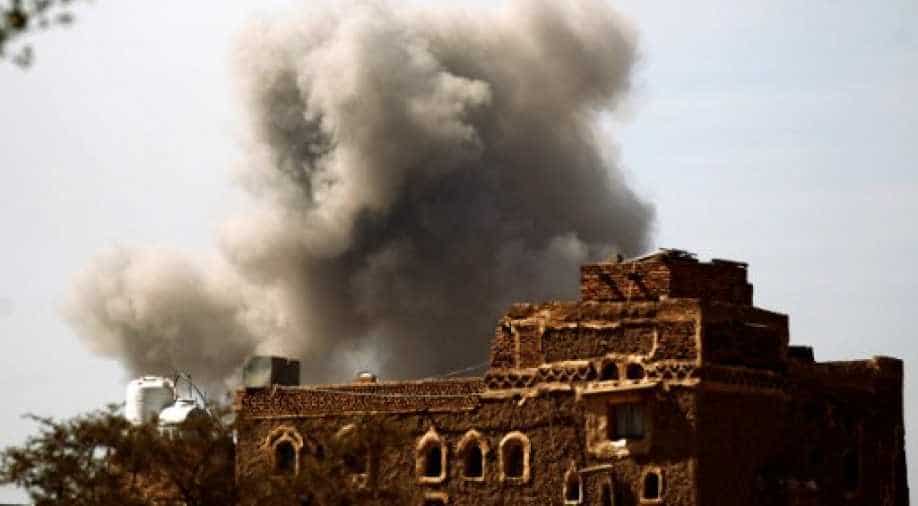 Smoke billows behind a building following a reported air strike by the Saudi-led coalition. Photograph:( AFP )

Air strikes and heavy clashes between rebel and pro-government forces in Yemen had killed at least 66 people in 24 hours, medics and security sources said Sunday.

The rebels took their dead to a military hospital in Hodeida, a major western port city they control, a medical source told AFP.

The hospital received 14 dead on Saturday and 38 on Sunday, as well as 55 wounded rebels, the source said.

On the pro-government side, 14 soldiers were killed and 22 wounded, according to medics in the southern port city of Aden where President Abedrabbo Mansour Hadi's government is based.

Coalition warplanes and Apache attack helicopters have been pounding rebels for several days in support of pro-Hadi forces attempting to retake the Red Sea city of Mokha, military sources said.

Pro-Hadi forces launched the vast offensive on January 7 to retake the region overlooking the Bab al-Mandab strait, a key maritime route connecting the Red Sea and the Indian Ocean.

By Sunday, loyalist forces were within 10 kilometres (six miles) of Mokha, they said, but the offensive has been slowed by mines laid by rebel forces.