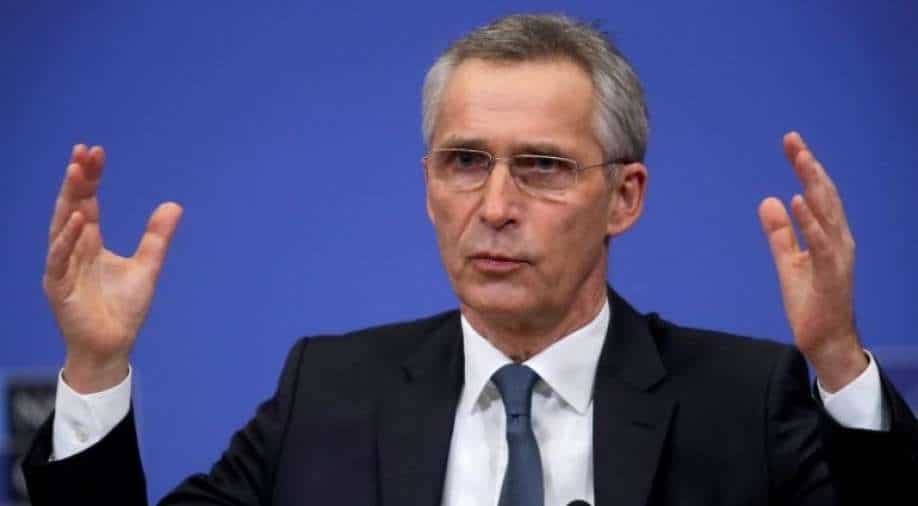 Moscow annexed Crimea from Ukraine in 2014. Two US warships are due to arrive in the Black Sea this week amid an escalation in fighting in eastern Ukraine where government forces have battled Russian-backed troops in a conflict in which Kyiv says 14,000 people have been killed over the years

NATO Secretary-General Jens Stoltenberg on Tuesday told Russia to end its "unjustified" military build-up around Ukraine at a meeting with Kiev's top diplomat.

"Russia must end this military build-up in and around Ukraine, stop its provocations and de-escalate immediately," Stoltenberg said.

Ukrainian Foreign Minister Dmytro Kuleba said on Tuesday NATO and the West must act quickly to prevent an escalation of violence between Ukraine and Russia, adding that further sanctions against Moscow and more military help to Kyiv could help.

"At the operational level, we need measures which will deter Russia and which will contain its aggressive intentions. This could be ... a new round of sanctions which would raise the price of Russian aggression," Kuleba told a news conference alongside NATO Secretary-General Jens Stoltenberg.

"This could be direct support aimed at strengthening Ukraine's defence capabilities. Because we do know that Russia spares no effort to prevent third countries from cooperating with Ukraine in the defence sector. Russia is working hard to undermine our defence capabilities."

Meanwhile, Russia on Tuesday warned the United States to ensure its warships stayed well away from Crimea "for their own good", calling their deployment in the Black Sea a provocation designed to test Russian nerves.

Moscow annexed Crimea from Ukraine in 2014. Two US warships are due to arrive in the Black Sea this week amid an escalation in fighting in eastern Ukraine where government forces have battled Russian-backed troops in a conflict in which Kyiv says 14,000 people have been killed over the years.

The deployment comes as the West sounds the alarm over what it says is a big and unexplained build-up of Russian forces close to Ukraine's eastern border and in Crimea. Russia has said it moves its forces around as it sees fit, including for defensive purposes.

Russian Deputy Foreign Minister Sergei Ryabkov was cited by Russian news agencies on Tuesday as warning US warships in the Black Sea to keep their distance, saying the risk of unspecified incidents was very high.

"There is absolutely nothing for American ships to be doing near our shores, this is purely a provocative action. Provocative in the direct sense of the word: they are testing our strength, playing on our nerves. They will not succeed," Ryabkov was cited as saying.

"We warn the United States that it will be better for them to stay far away from Crimea and our Black Sea coast. It will be for their own good."

The Pentagon has declined to discuss the ships' deployment, saying only that the US military routinely sends vessels to the region.

Russia's Black Sea Fleet is based in Crimea and it has powerful missile and radar facilities on the peninsula.