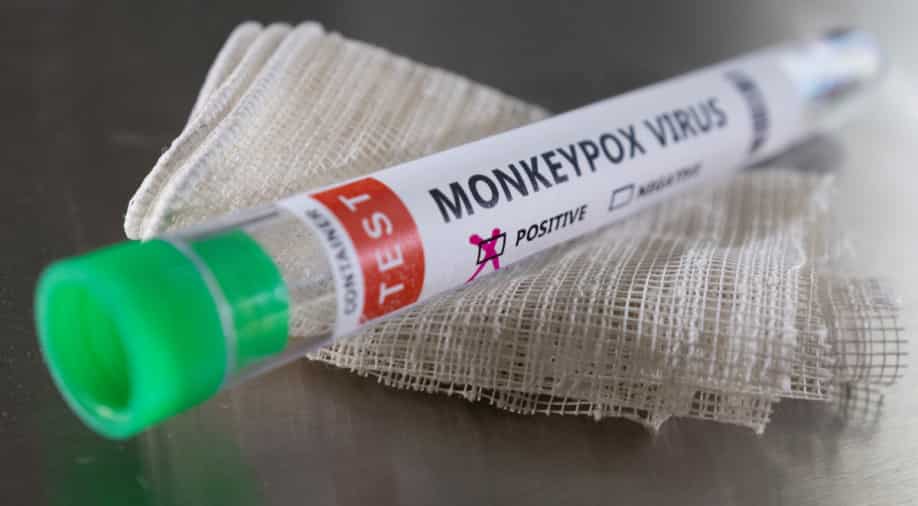 In this picture, a test tube labelled "Monkeypox virus positive" can be seen. Photograph:( Reuters )

According to the UK Health Security Agency (UKHSA), the latest monkeypox cases have taken the total to 56

The United Kingdom has detected 36 new cases of monkeypox after community transmission of the virus. According to the UK Health Security Agency (UKHSA), the latest monkeypox cases have taken the total to 56.

Health officials believe that although the outbreak was concerning, the risk to Britons remained low. They have advised people who have developed symptoms to isolate themselves for up to 21 days.

UKHSA chief medical adviser Susan Hopkins told BBC, ''We are finding cases that have no identified contact with an individual from West Africa, which is what we've seen previously in this country.''

"The risk of the general population remains extremely low at the moment, and I think people need to be alert to it," she added.

"It is basically a very rare disease and so far the consequences don’t seem to be very serious but it is important that we keep an eye on it," said British Prime Minister Boris Johnson.

Although the monkeypox virus does not spread easily between people, it can be passed on through close person-to-person contact or contact with items used by a person who has monkeypox, such as clothes, bedding, or utensils.

"Because the virus spreads through close contact, we are urging everyone to be aware of any unusual rashes or lesions and to contact a sexual health service if they have any symptoms," Hopkins said.

"A notable proportion of recent cases in the UK and Europe have been found in gay and bisexual men so we are particularly encouraging these men to be alert to the symptoms," she added.

Rosamund Lewis, head of the smallpox secretariat that is part of the WHO Emergencies Programme, told a briefing that the UN agency does not have evidence that the monkeypox virus has mutated.

"This is a containable situation," particularly in Europe, she said. "But we can't take our eye off the ball with what's happening in Africa, in countries where it's endemic."

"We know that men who have sex with men (MSM) if they do spot an unusual rash, they're likely to want to get it sorted out quite quickly," said Andy Seale, strategies adviser at the Department of Global HIV, Hepatitis and STI Programmes at the WHO.

"The fact they've been proactive in responding to unusual symptoms might be part of the story. This will become clearer in the weeks and days to come," Seale said.