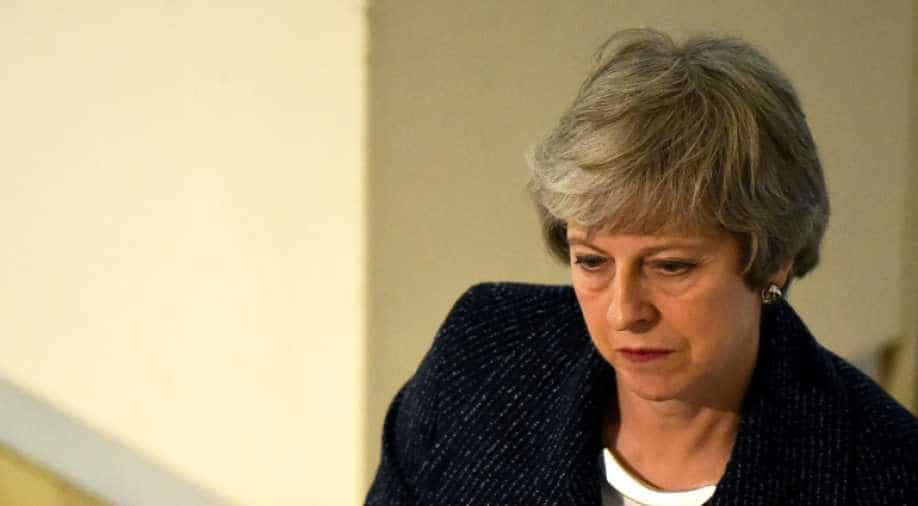 May will demand that Brussels agree on the need to change the so-called 'backstop' for the Irish border in the withdrawal agreement so that Britain cannot be 'trapped' in the bloc against its will. Her path will be uphill.

Britain's Prime Minister Theresa May returned to Brussels on Thursday for a showdown with EU leaders as she bids to avoid a calamitous no-deal Brexit in 50 days' time.

The stony-faced premier shook hands stiffly with Jean-Claude Juncker, the president of the European Commission, but refused to respond to questions as they entered EU headquarters.

May is to demand that Brussels agree on the need to change the so-called "backstop" for the Irish border in the withdrawal agreement so that Britain cannot be "trapped" in the bloc against its will.

Expectations for the visit were already modest when, on Wednesday, EU kingpins Donald Tusk and Juncker torched May's prospects of winning changes to the withdrawal agreement.

Juncker, the president of the European Commission, told reporters that May already knows and accepts that the Union will not reopen talks on the deal.

And Tusk, who represents EU member governments as head of the European Council, triggered outrage across the Channel by damning pro-Brexit politicians for — in his view — recklessly failing to plan.

"I've been wondering what that special place in hell looks like, for those who promoted Brexit without even a sketch of a plan how to carry it out safely," Tusk said.

Juncker later repeated the same warning that the withdrawal agreement, and the backstop clause designed to keep the Irish border open if no future trade deal is agreed, will not be changed.

"She knows that the commission is not prepared to reopen the issue," Juncker said, after talks with Irish Prime Minister Leo Varadkar, who also insisted on the need for the backstop.

But even this latest demonstration of EU unity did not deter Downing Street, which insisted May's top priority on the trip was to "find a way to guarantee we cannot, and will not, be trapped in the backstop".

Number 10 said that because the British parliament rejected the deal, May must seek material changes to the accord or see it fail.

When she meets Juncker, and later Tusk, the beleaguered British leader will admit that "securing such changes will not be easy", according to talking points released by Number 10.

But she will add: "Last week, Parliament made clear that for the first time it could support the withdrawal agreement, subject to changes to the backstop.

"The government now wants urgently to work with the EU to secure such changes. The EU shares the UK's commitment to leave with a deal. We must show determination and do what it takes to now get the deal over the line."

The impasse in Brussels has deepened fears that Britain could crash out of the EU without a deal on March 29, disrupting trade and supplies to manufacturing.

May has exasperated EU leaders by repeatedly coming to Brussels without detailed proposals to solve the Brexit deadlock, and Tusk warned her he expected her to bring "a realistic suggestion on how to end the impasse".

Jeremy Corbyn, the leader of the main opposition Labour party, wrote to May on Thursday setting out his five conditions for backing her on Brexit — including the UK staying in the EU's customs union.

While his demands will not be palatable to many in May's Conservative party — not least because of the deeply entrenched tribalism of British politics — it suggests there may be room for manoeuvre, if not yet a clear path to a cross-party deal.

After seeing Tusk and Juncker on Thursday, May will have dinner with Varadkar in Dublin on Friday.

Varadkar, whose government has stressed the importance of maintaining an open border between Ireland and Northern Ireland after Brexit, said recent "instability in British politics" showed why a backstop was essential.

On Wednesday, May discussed the issue with Northern Irish leaders in the British province.

Last month, the House of Commons overwhelmingly rejected the Brexit deal that May had negotiated with the EU after 18 months of painstaking diplomacy.

May is now looking into changes to satisfy her MPs, who fear the backstop would keep Britain indefinitely tied to EU rules with even closer alignment for Northern Ireland.

May's spokesman stressed that she was not coming to Brussels to ask for more time and remained determined to deliver a Brexit deal before the March 29 deadline.