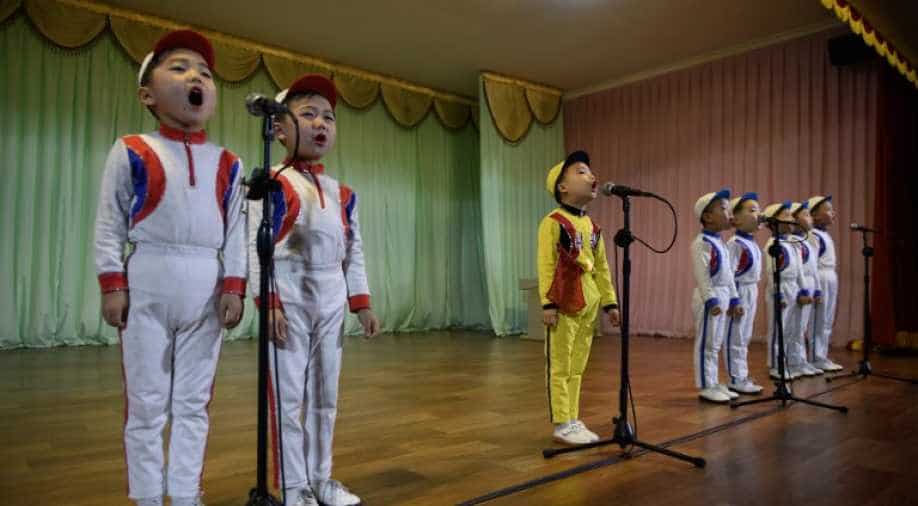 The children of the Sinuiju City Kindergarten belted out the finale of their hour-long show, 'We Cannot Live Without You, Father' -- an ode to Kim Jong Un.

Lined up in vividly-coloured costumes, make-up and bright smiles, the children of the Sinuiju City Kindergarten belted out the finale of their hour-long show, "We Cannot Live Without You, Father" -- an ode to Kim Jong Un.

The five- and six-year-olds' previous number, "The Voice of My Heart", lauded the Workers' Party of Korea, which has ruled the North since the country's 1948 foundation.

Their musicianship was remarkable and the hour-long performance featured singing footballing girls -- North Korea is a power in the women's game -- and drumming boys in blue waistcoats, interspersed with political messages.

Songs included "We have Nothing to Envy" and two more titled "Our Country is the Best" or similar.

From an early age North Korean children are taught to revere the country's rulers.

A mural of its founder Kim Il Sung and his son and successor Kim Jong Il surrounded by adoring youngsters stands in the entrance of the kindergarten in Sinuiju, on the border with China.

The two men are referred to as the Great Leaders and their portraits gaze down from the wall of every classroom, home and office in the country.

The incumbent Kim Jong Un, the third generation of the family to take charge of the country, is known as the Supreme Leader.

"From a young age we educate the children to know about our great leaders and the supreme leader," said the kindergarten's principal Kang Sun Hui.

"The most important thing is that the children know and admire the party, the leader and the nation, and we attach the greatest significance to loyalty."

The Sinuiju kindergarten is a showpiece establishment that teaches art and calligraphy as well as music, and exemplary discipline.

Once North Korean children reach school, "revolutionary studies" are a key part of the curriculum.

They start with two hours a week on the childhoods of the elder Kims and two years later, Kim Jong Suk, the wife of Kim Il Sung and mother of Kim Jong Il, joins the pantheon.

By the final year of school, around a fifth of the school week is devoted to the subject.

But the core lessons are learned early.

Out of 750 youngsters at the kindergarten, 39 were chosen to take part in this year's Mass Games, the North's all-singing, all-dancing propaganda display, undergoing months of intense training in Pyongyang.

Kim Jong Un saw the show six times during its run, accompanied once by the South's democratically-elected President Moon Jae-in, who has brokered talks between Pyongyang and Washington.

"The children were so happy when the Supreme Leader was watching they cried as they performed," Kang said. "Afterwards they said, 'I saw our father, our Supreme Leader' and cried tears of joy."