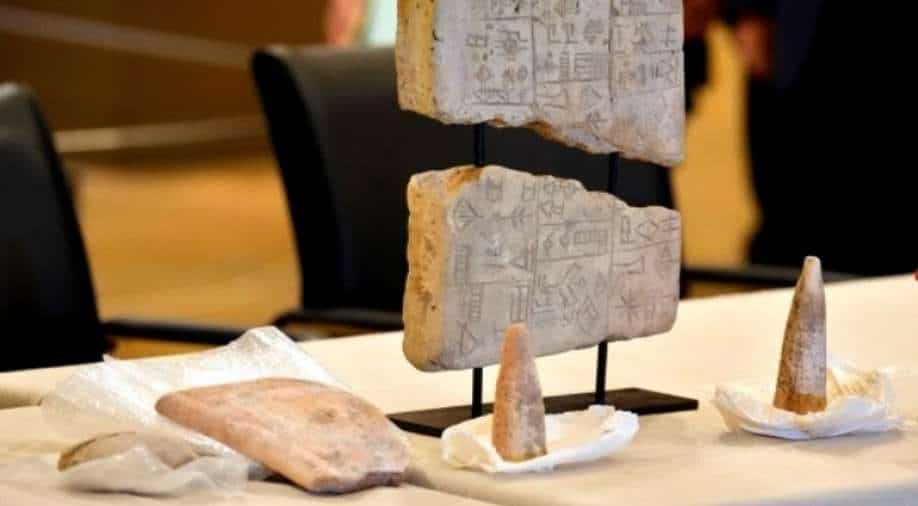 Around 337 ancient artifacts returned to Iraq by Lebanon. Photograph:( Twitter )

On Sunday, Culture Minister Mohammad Mortada returned the items to Iraqi Ambassador to Lebanon, Haider Shyaa Al-Barrak, during a ceremony held at the National Museum of Beirut, NNA said

Around 337 ancient artifacts have been handed over to Iraq by Lebanon's Culture Ministry.

These artifacts were on display in a private Lebanese museum for years, the National News Agency (NNA) said in a report.

On Sunday, Culture Minister Mohammad Mortada returned the items to Iraqi Ambassador to Lebanon, Haider Shyaa Al-Barrak, during a ceremony held at the National Museum of Beirut, NNA said.

At the ceremony, Al-Barrak said, "We are celebrating the handing over of 337 artifacts that are of different eras of civilisations in Mesopotamia."

During decades of war in the country, several antiquities of Iraq were smuggled abroad, Xinhua news agency reported.

Some of these antiquities have also found their way home recently.

In September 2021, 3,500-year-old Gilgamesh Dream Tablet was handed over to the Iraqi embassy by US authorities. It was also put up on display.

At a ceremony in Baghdad, Iraqi Foreign Minister Fuad Hussein, said, "This day, represent a victory in the face of the desperate attempts of those why try to steal our great history and our ancient civilisation."

As per Hussein, it was one of 17,926 artefacts, which had been recovered by Iraq from the UK, Japan, Italy, the US and the Netherlands.