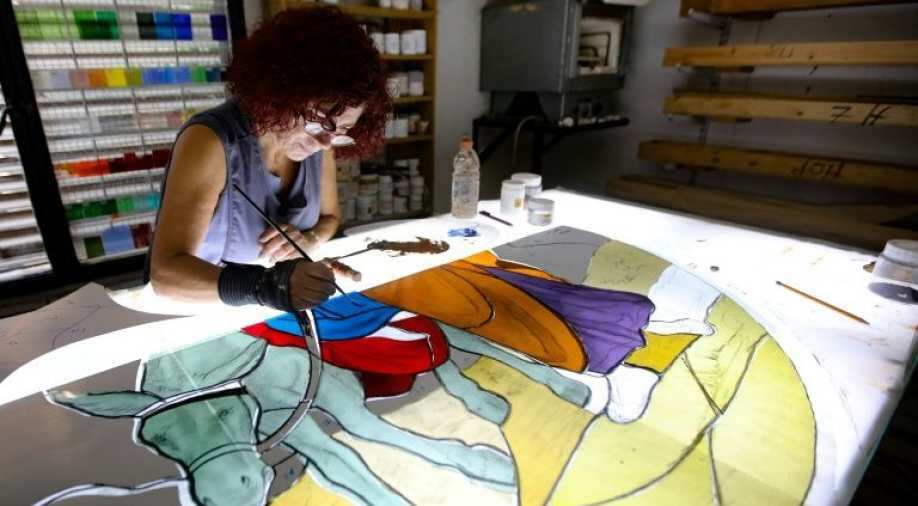 The massive explosion at the capital's port on August 4 killed more than 190 people and wounded thousands more as it sent lethal shockwaves pummelling through the city.

Lebanese stained glass artist Maya Husseini had hoped to retire after decades spent designing colourful windows, but she has been flooded with work since the blast that ripped through Beirut.

"I can't possibly not try to restore what is gone," said the 60-year-old woman, her bright red curly hair in a short bob.

The massive explosion at the capital's port on August 4 killed more than 190 people and wounded thousands more as it sent lethal shockwaves pummelling through the city.

But it also ravaged dozens of Beirut's most cherished heritage buildings.

Husseini is one of several artists slowly starting to restore artworks devastated in the disaster.

In her basement workshop on the outskirts of Beirut, she gestured at what remained of windows of a 19th-century church she had restored after the 1975-1990 civil war.

A gaping mess of mangled metal, dotted by a few surviving pieces of orange and blue glass, lay in a cardboard box.

"At least seven projects I had worked on were blown away," Husseini said.

They included one of her first projects designing biblical scenes on glass for a church, and the dazzling yellow and orange windows she had crafted for the famed Sursock Museum.

Before the blast, she had planned to retire after completing glass windows for a last cathedral in Jordan.

"But now I won't allow myself to stop," she said.

On her work table, she picked a green piece of glass and lodged it between curving lengths of soft lead to rebuild a window of flowers and leaves for a private home.

Even if she has now taken on apprentices, she said there is still a lot of work ahead.

"For some people who have asked me, I won't be able to start anything for at least two years," she said.

In neighbourhoods near the port, the race is on to cover up 100 heritage buildings before the autumn rain.

The United Nations culture and education fund, UNESCO, has said it will hold a conference to try to drum up hundreds of millions of dollars for restorations.

But until that aid arrives, Lebanese are doing what they can on their own.

Among them, artwork conservation specialist Gaby Maamary has decided to offer to restore damaged paintings for free.

He says he was inspired after seeing Lebanese youths sweeping away seas of rubble and glass after the blast, and decided to channels his skills towards preserving Beirut's heritage.

"It's something that you can lose easily if you don't pay attention," the 58-year-old artist and university lecturer said.

In his Beirut studio, he carefully held up a 17th-century nature morte by Italian artist Elena Recco, depicting a cat greedily eyeing up some dead fish.

In several places, the canvas had been slashed by flying shards of glass.

Wearing white gloves, he turned over the back of another canvas he had started cleaning, the untreated part a shade darker and shimmering with fine glass dust.

Nearby, he pointed to a work by late Lebanese artist Sophie Yeramian whose dried paint had been cracked by the blast.

- Saved from the trash -

"We did not expect that amount of calls," he said.

The initiative has taken him to assess damage in art galleries, but also private homes.

In one, he pulled a painting worth tens of thousands of dollars out of the trash. To his horror, he found another bound up in sticky tape.

The owner had rushed to hospital with her severely injured son after the explosion, and someone helping to clean up the mess had not realised their worth.

But even without sticky tape to complicate matters, Maamary said conservation is a complex process that involves hours of planning before even touching the artwork.

"Sometimes the same step has to be done several times, simply because we don't have the museum equipment," he said.

But drawing on the help of friends and using what is locally available, Maamary is determined to carry on.

"We're going to continue doing that on a daily basis until we run out of materials or means," he said.