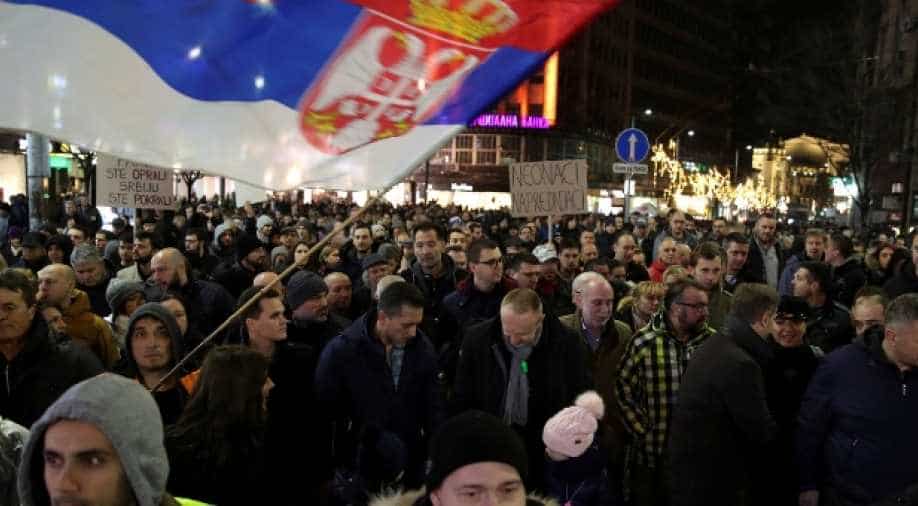 While Vucic did not run for office himself, the 50-year-old tightly controls the party, which has been in power since 2012.

Serbian President Aleksandar Vucic declared a landslide victory for his ruling party Sunday in a parliamentary election tarnished by a boycott from much of the opposition, who accuse the leader of burgeoning authoritarianism.

With some 63 percent of the vote, according to Vucic, the centre-right Serbian Progressive Party (SNS) was set to dramatically expand its dominance in the 250-member parliament.

While Vucic did not run for office himself, the 50-year-old tightly controls the party, which has been in power since 2012.

"I am grateful to the people for this historic support," he said with elation from the SNS headquarters where brass music blasted in celebration.

"We won everywhere," Vucic continued. "We won in the places where we had never won before."

The sweeping success was helped by a boycott from the country's main opposition camp, who decried the elections as neither free nor fair under Vucic's domineering reign.

But despite their stay-at-home campaign and lingering concerns about the coronavirus, turnout was lower than normal -- but not dramatically -- at slightly under 50 percent according to the independent election monitor CRTA.

The boycotting opposition slammed the "fake elections" and claimed their movement was victorious.

Either way the ruling party will have few rivals to contend with in the halls of parliament, where they are expected to hold around 189 seats.

In second place was their traditional junior coalition partner, the Socialist Party of Serbia (SPS), predicted to claim 32 seats, according to the IPSOS polling agency.

And next in line was the only opposition party to garner enough votes to pass the three percent threshold to enter parliament: the newly formed Serbian Patrotic Alliance (SPAS) with around a dozen seats.

A slate of ethnic minority parties with a lower bar to entry will also take some 17 spots, according to IPSOS.

Among those who didn't make the cut was the ultra-nationalist Serbian Radical Party, led by convicted war criminal Vojislav Seselj.

Without a meaningful opposition, the "pyrrhic victory" could ultimately discredit Serbia's ruling party as it will be viewed as "less legitimate than ever before", Balkans analyst Florian Bieber commented on Twitter.

But in the short term they will be more powerful than ever, capping Vucic's eight-year effort to consolidate control over the country's democracy, first as prime minister and now as president.

He came into this poll riding a fresh wave of popularity for keeping Serbia's coronavirus situation in check, with around 260 deaths in a country of seven million.

Although the post of president is meant to be ceremonial, he remains Serbia's top decision-maker and led the country through the health crisis.

"There is a competition but participants are not equal," he explained of a playing field warped by Vucic's outsized influence.

Watchdogs say Vucic's power lies in his manipulation of the media, with several outlets effectively serving as SNS propaganda machines.

The US-based Freedom House recently declared the country no longer a democracy but a "hybrid regime", due to "years of increasing state capture, abuse of power, and strongman tactics".

Yet the Serb leader can count on support from allies across the international stage.

In addition to close ties with Russia and China, he has backing from the West, where he is seen as capable of resolving Serbia's decades-long territorial dispute with former province Kosovo.

With elections behind him, the president will now face pressure to make progress on talks with Pristina that have been frozen for over a year.

He already has a busy schedule lined up: over the next week he will talk with the European Union's envoy for Serbia and Kosovo, visit Moscow and meet Kosovo representatives at the White House.

At the heart of the dispute is Belgrade's rejection of the independence that Kosovo, home to an ethnic Albanian majority, declared after a bloody 1990s war that was halted by a NATO intervention.

The issue is highly emotive for Serbian nationalists but it weighs especially heavily on the Serb minority still living in Kosovo.