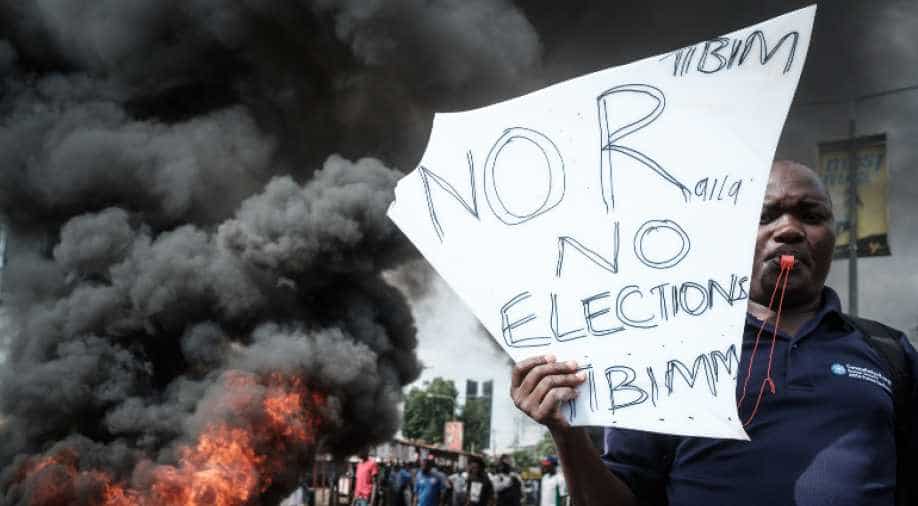 An opposition supporter holds a placard during their protest against Independent Electoral and Boundaries Commission (IEBC) officials over claims of bungling the August presidential vote. Photograph:( AFP )

Kenya's opposition vowed to pursue a campaign of protest for electoral reform, defying a ban on rallies in main city centres announced by the government Thursday.

The ban came after the opposition National Super Alliance (NASA) called for daily protests next week.

The country remains gripped by uncertainty over whether an October 26 presidential election will go ahead after NASA chief Raila Odinga refused to take part.

"Due to the clear, present and imminent danger of breach of peace, the government notifies the public that, for the time being, we will not allow demonstrations within the central business districts of Nairobi, Mombasa and Kisumu," Matiangi said.

NASA said it would defy the order and protest Friday and all of next week.

The protests have seen hundreds of opposition supporters march through the streets, sometimes burning tyres and clashing with police who have used tear gas to disperse crowds.

"We will continue with our demonstrations as planned across the country. The law is very clear on peaceful demonstrations," said one of the coalition's leaders Moses Wetangula.
Though relatively small, the protests have caused outsized disruption, forcing shops to close up and deterring some from visiting city centres on demonstration days.

There have also been incidents of pickpocketing and muggings on the edges of the protests.

"It is the responsibility of the organiser that all participants remain peaceful. The organisers shall be held personally liable for any breach of law during the demonstrations," he said.

No deaths have been reported since however several people were left with gunshot injuries in the western opposition stronghold Kisumu on Wednesday.

Odinga said this week that he was withdrawing from the scheduled re-run against President Uhuru Kenyatta whose victory in the original August poll was annulled last month by the Supreme Court citing widespread irregularities.

Odinga said that without fundamental reforms to the Independent Electoral and Boundaries Commission (IEBC), the vote would not be free and fair.

"All indications are that the election scheduled for 26 October will be worse than the previous one," he said, announcing his withdrawal Tuesday.

The IEBC has dismissed most of Odinga's demands and on Wednesday said he had not filled in the appropriate form for withdrawing from the re-run and therefore was still a candidate alongside Kenyatta.

The commission also agreed to add six candidates who contested the original poll after the High Court ruled they should not be excluded.

On Thursday the country's Senate approved a raft of amendments to electoral laws that Odinga has charged will make the "irregularities" cited by the Supreme Court legal.

The new laws will allow manual vote counting to supersede electronically transmitted results and make tally forms count even if there is "a deviation from the requirements of the form".

Among the irregularities noted by the Supreme Court was the number of votes tallying sheets that were unsigned, not stamped, or did not contain watermarks or serial numbers -- despite the fact that one company was hired to print them out.

Kenyatta has said he will sign the amendments into law without hesitation.